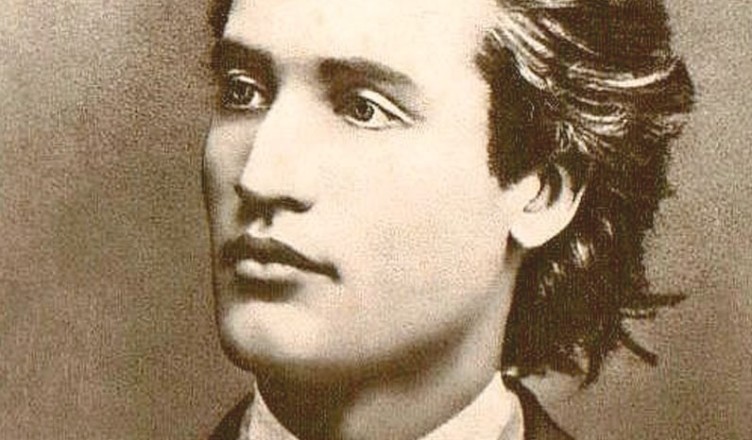 The name Mihai Eminescu isn’t likely to ring an immediate bell for Anglophone readers, but would certainly deserve to, having circled the globe quite a few times. The man unanimously considered Romania’s greatest poet was first translated into German (by the Romanian Queen of the time, Elizabeth, who wrote under the name Carmen Sylva), and would later be translated into English, French, Spanish, Portuguese, Italian, Hindi, Arabic, Hungarian and Esperanto.

Perhaps the number of translations that have been published through the centuries can provide a fairly panoramic impression of a writer’s worth, if we consider that criticism can be in equal measure benevolent and subjective. While some would say that the name deserves even more international credit than it has received, others would say that the term ‘national poet’ and everything that it necessarily represents – grossly, Romanticism – has become outdated and finds itself in need of serious reassessment. Mihai Eminescu, in a manner as disputed as nearly everything concerning him, makes for a worthy example to consider in this discussion, precisely by fitting the mold of a national poet while defying and circumventing it.

Mihail Eminovici was born in 1850 to a family of minor landowners in the North of Romania, and spent his childhood in a rural setting, as would become apparent in his later poetry, just as we find in nearly all of European Romantic poetry of the time. The man who would take the name Eminescu (preferring a quintessentially Romanian suffix to a Slavicized one, that in itself the result of historical foreign influence) would debut at sixteen, quickly becoming popular and respected, with a career that would see a dynamic growth, before its being cut short after twenty-some years.

He studied a kaleidoscope of subjects in Vienna and Berlin, places which would influence his work profoundly. Here, under the influence of Schopenhauer, Schiller and Kant (whom he would be the first to translate into Romanian), Metaphysics would lead him towards Hindu Studies. He would later combine this language and culture with his own Romanian one, fully convinced by the notion of an inherent spiritual relationship between East and West. Later, this inheritance would be tangible in the 20th century with North American Romanians Mircea Eliade and Ioan Petru Culianu, as these two figures would pave the way into the comparative study of religions. For his time, Eminescu was something of a Herman Hesse avant la lettre in this respect, already predicting the concept of Comparative Literature that would become such an enterprising area of interest in the century that would follow his – certainly due to his German education, philosophically compatible with his authentic Romanian background. Though his journey to India was only imaginary, it was, in part, this interest that contributed to the richness and polyphony of his work:

We cannot say that it is responsible for those factors, but rather that this interest gave an additional dimension to his poetry, which would serve as a trampoline for many writers after him. There are, indeed, many factors that would qualify him as ‘the last Romantic’, as he is dubbed, but it’s really Eminescu’s failure to deliberately adhere to a particular current that makes him more than a Romantic, rather a pre-modernist, emerging at the same time as Baudelaire, rather than, say, Mickiewicz, whom we would naturally be more inclined to compare him with. Romania, like other European nations, would gain its independence in the 19th century, but unlike those other peoples, Romanians would not consider themselves an autonomous and united under a single state until 1918. So Eminescu is an atypical, late Romantic, but one fully in tune with his geography and époque.

Romania’s greatest playwright (and a redoubtable prose writer), Ion Luca Caragiale, would describe him as being ‘joyful and sad, communicative and abrasive, gentle and severe, satisfied with anything and always dissatisfied with everything; sometimes ascetically abstinent, sometimes greedy for life’s pleasures; running away from people and seeking them out; heedless as a stoic ancient and irritable as an ill-natured girl. A strange mixture,’ Caragiale concluded, ‘happy for the artist, unhappy for the man!’ All in all, we can gather that his experience on earth was full of idiosyncrasies, given too that he left a wealth of abandoned projects behind. His was an often turbulent life, consisting of efforts to impose truth and justice as he understood them in the role of both poet and journalist, often going against the current of what was considered refined and fashionable socially and politically, also bearing the mark of an intense love story that would fail to come to fruition. His life would be cut short mysteriously at the age of thirty-nine, and is still the subject of conspiracy theories today: common consensus lies between mercury poisoning for syphilis or misguided treatment for Bipolar Disorder, though many have suggested a potential murder plot, given the poet’s robust health. His lover and muse, Veronica Micle, would commit suicide shortly after his death via arsenic poisoning; his own demise continues to be swaddled in the bluish mantle of enigma.

Though Eminescu attained success during his lifetime, much of his magnum opus would be published posthumously. His poetry is linguistically seductive, often characterized by nostalgia, particularly when it addresses childhood and love. Like Keats, he is suavely diaphanous and aware of the power of the sublime, unafraid of life’s monstrous themes. Like Goethe, he loves the forest. Like Lermontov, he is often ironic, with a sharp spirit for the human paradox, and it is precisely here that he is most capable of provoking emotional vibration – as a sorcerer of juxtaposition, with poems like ‘Angel and Demon’ and ‘Venus and Madonna’. Take ‘Glossa’, for instance, and see how it compares to the sentiments that travelled across Europe in that era:

We find it absolutely comparable to Shelley’s ‘Love’s Philosophy’:

Or even Matthew Arnold’s’ ‘Stanzas from the Grande Chartreuse’:

However, Eminescu, unlike Shelley, was not a revolutionary, nor a moralist like Matthew Arnold.

Probably thanks to being the right person at the right time from a historical point of view (despite being unlucky in his personal life), Eminescu’s truly exceptional talent has come to be considered unparalleled in the modern era of Romanian literature, and has thus left a profound impact on the society he left behind. He was claimed by the Fascist party of the 1930s, while a song from 1982, written and performed during full Communism by Adrian Păunescu (the leading poet of that era), is as follows: ‘Without him even our star/Would fall from among the other stars’. Today, in a time of democracy, a youthful portrait of his is on the 500 lei bill (equivalent to about £100), and nearly anyone in Romania and the Republic of Moldova (at least from an older generation) can recite him. On the contemporary Romanian literary scene, topics considered ‘traditional’ are now being questioned and deconstructed, and there is certainly a feeling against the educational ancien régime, though, as elsewhere, this is probably contaminated by factors that are ultimately external to poetry, just as the ‘conservative’ that Eminescu was in the second half of the nineteenth century no longer carries the same meaning today as it did during his lifetime. Eminescu is not at all spared from this inquisition, and continues to polarize critics and even society more than ever, but it seems as though he has never stopped influencing later generations of poets. Take, for instance, Traian T. Coşovei, a representative of the Postmodern ‘’80s Generation’ that continues to set the tone for the Romanian literary scene today. Here is ‘On Beauty’:

Comparative Literature, so noble in its scope, can sometimes reveal itself to be afflicted by the unfortunate Catch-22 of seeking to validate ‘the all-encompassing’ through a dogma that, through its programmatic nature, often ends up being quite narrow. Critic Edgar Papu attempted to sketch out some preliminaries of what has now spiraled into ‘World Literature’ in the Seventies and Eighties, with a formula that would gauge ‘literary universality’ – essentially the cream of the crop. This is based on three tenets:

1. The perfection of an already existent literary current.
2. Substantial contribution to writing down the most representative characteristics of the moment being described.
3. Serving as a precursor to new literary horizons.

This blueprint, scientific and reasonable enough, is successful when we look at Eminescu who, like his idol Shakespeare, above all contributed to writing his language, rather than writing in his language, as Pound would say, making it new, by affiliating everyday words with archaic ones. Most valuably, it is not implausible to consider this a worthwhile aim for future writers. Thematic concerns follow suit: with a sense for world-building before the term existed, Eminescu dreams up Ancient and Medieval settings, lyrical and dramatic tropes, nearly always stirring, and a downright curatorial sense for artistically refining folkloric elements, thereby paving the way for the best of what Romanian aesthetics would show the world: think of the Romanian-French sculptor Constantin Brâncuși, a half-century later.

But while succeeding in making literary allure quantifiable can be absolutely useful to both the study of a poet and to further, more general study, we are today faced with the dilemma of ‘the national poet’ becoming something of a provincial, if not empty phrase in a world so globalized, so mediatized, and, in many aspects, so homogenized. Yet one finds that the continuing magnetism of Eminescu lies precisely in his ability to slip through one’s fingers and in his failure to constrain himself to a sole perspective, characterized by an unworried ability to place Shakespeare and folk tales in a single imaginative panorama. We are reminded, amusingly, of a phrase that became something of a slogan for a political party of the time: ‘Someone stop this Eminescu bloke!’

Beyond critical debate, Eminescu’s poems best speak for themselves, beginning with the world’s longest love poem: ‘Luceafărul’ or ‘The Evening Star’, a lyrical narrative of the impossible love between a human and an astral spirit. The first few stanzas follow:

Or consider the evocative short lyric:

When I was seventeen, my grandmother took me to Eminescu’s grave in Bellu Cemetery in Bucharest. I crouched down and stroked the dirt of the grave – slightly damp, under a tree – with my bare fingers, and I remember thinking of Byron’s words, which I think Eminescu would have – or might have – enjoyed: ‘I love not man the less, but Nature more…’ I liked to think then that the contact with that special bare earth would bring me some sort of luck. I like to think that it did.

[1] Corneliu M. Popescu translated much of Eminescu’s work into English quite successfully, sadly passing away at the age of nineteen. He is the namesake of the Popescu Poetry Prize of The Poetry Society.

Andreea Iulia Scridon is a writer and translator. Her work has appeared in Asymptote Journal, World Literature Today, E·ratio Poetry Journal, Harana Poetry and elsewhere. She is an editor at Asymptote and E·ratio.

‘Mandrake and Scammony’: on the poems of Dorothy Molloy