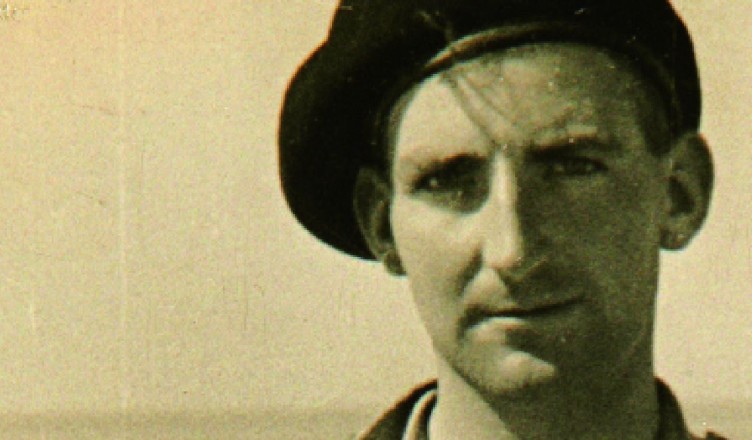 The below essay appears in Jamie McKendrick’s new book The Foreign Connection: Writing on Poetry, Art & Translation, forthcoming from Legenda this spring.

The opening of Douglas’s ‘Desert Flowers’ seems unsteady, and doesn’t inspire confidence, and yet it turns into a poem in which the poet declares an unequivocal confidence in his calling. By no means the first enduring poem he wrote, it nevertheless stands as a kind of break-through. Still, the opening is troubling. That first line, beginning with a vague present participle, followed by the colourless auxiliary verb ‘are’ and the unspecified flowers – the whole thing twisted by an inversion – is then interrupted by the address to a predecessor, the First World War poet Isaac Rosenberg, who would appear to make the speaker, and what he has to say, redundant. Repeating what an earlier poet has said, as Douglas is only too aware, disqualifies his own poem from the originality that would justify it.

The flat, resigned tone may be taken to signal the fact that the soldiers in the Second World War are now reliving the experience of those of the First. Though a different terrain is suggested by the title – Egypt as opposed to the trenches in France – the predicament is unchanged and the perspective is therefore repeated.

As it happens, Douglas himself makes the same argument insistently and explicitly in a prose piece called ‘Poets in this War’, probably written in May 1943, less than a month before he sent off ‘Desert Flowers’ to Tambimuttu, the Singhalese editor of Poetry London, who, along with John Hall and Edmund Blunden, was effectively the lifeline extended to his poems while in the Middle East, at least with regard to a literary scene that must have seemed far away. Like Arthur Rimbaud, another extraordinary youthful poet, Douglas finds himself in North Africa utterly remote and estranged from the literary circles he frequented, only in Douglas’s case he hasn’t quite severed the links. (He translated some of Rimbaud’s poems and in Alamein to Zem Zem[1], his prose account of the war, makes reference to Rimbaud’s ‘Le Dormeur du val’.) Here, in a briskly dangerous manner reminiscent of Rimbaud’s letters, Douglas is discussing why the poets in this war have made no advances on the work of the WWI poets:

They do not write because there is nothing new, from a soldier’s point of view, about this
war except its mobile character. There are two reasons: hell cannot be let loose twice:
it was let loose in the Great War and it is the same old hell now…Almost all that a modern
poet on active service is inspired to write, would be tautological. And the mobility of
modern warfare does not give the same opportunities for writing as the long routines of
trench warfare.

It is no surprise to find this brilliant twenty-three-year-old poet trying to find an entry into the art, to figure out how the present relates to the past, but what strikes the reader is the uncompromising and almost pitiless way in which he analyses the disabling impasse. He wants at all cost to avoid the repetitious, the ‘tautological’.

A contrary reading of this opening would see the invocation of Rosenberg as a sign of confidence or ‘being in the confidence of’ and therefore able to speak freely and openly to the poet who perhaps, with the possible exceptions of Georg Trakl and Giuseppe Ungaretti, wrote the most uncanny and unprecedented poem of that conflict – ‘Break of Day in the Trenches’. This alternative may be more plausible when looking back at the opening from the poem’s end, so we need the whole poem in front of us.

As the poem proceeds we meet the odd zeugma of ‘shell and hawk’ (two things that fly) and realise that the shell must be killing the men, the hawk the jerboas (perhaps the desert parallel to Rosenberg’s ‘droll rat’) and the repetition of ‘slaying’, with the uncomfortable wait for the run-on across the stanza for the isolated phrase ‘the mind’, make the reader feel the poet’s uncertainty. Are the shell and the hawk really ‘slaying// the mind’? Or isn’t it rather the whole predicament which murders minds (as well as persons)? A development of this idea would find a far better home in his final poem, ‘On a Return from Egypt’, with ‘the sloe-eyed murderers / of themselves’ where the line break is, by contrast, arresting and purposeful.

This plodding bit of prat. crit. is not intended to show that Douglas is an incompetent poet, or even to reveal someone still learning his craft but unfortunately floundering. That second option is of course feasible – he was a young soldier in an unfamiliar landscape two thousand miles from his home and recently wounded by a landmine. But it is not a poem that asks for or requires either sympathy or special pleading, and I’m more inclined to think that the slapdash manner of the opening is deliberate. It’s a sketch, laying down the lines fast. And what it describes is his uneasy predicament both physical and psychical – the latter Harold Bloom would call ‘belatedness’. The poet’s access to originality and primacy is stymied and blocked by a precursor. In this case, the candour with which Douglas acknowledges the fact has something about it which is more comradely than the antagonism that Bloom is wont to describe. After all, without diminishing Bloom’s insight, the agon that both poets faced was not so much psychomachia as literal warfare – they had other less phantasmal enemies to face. Chances are, as both poets knew, their deaths were imminent. And ‘Desert Flowers’, even more than ‘Break of Day in the Trenches’ bears witness to this knowledge, and presents it in a flat, almost posthumous tone of voice.

But to keep reading: although the poem has warmed up with the strange ‘dogs who cry words’ as though the Egyptian jackal god Anubis has been let off the leash, as perhaps falcon-headed Horus had been earlier, at the end of the second stanza once again he reproaches himself ‘But that is not news.’ Not the ‘news that stays news’ which Pound said a poem should be.

And yet by the end of the poem Douglas, albeit in a conditional phrase, confidently claims that he ‘will sing/ Of what the others never laid eyes on’. So between the stumbling opening and this assured and haunting finale, something has occurred that allows the poet to feel his tongue has been freed from repetition, from the fear of merely parrotting the poets who have preceded him. What has happened? Where does this eerie certainty come from? Almost the same matter-of-fact familiarity with the mortal, the uncanny and the otherworldly that will surface in his later poem ‘Vergissmeinnicht’. The derivation of the word ‘eerie’ is from Anglo-Saxon ‘earg’ meaning ‘cowardly’ but there is nothing cowardly about the stance Douglas adopts in this or any of his poems. It has something of an earlier classical world view: an encounter with and an acceptance of Fate.

Having said that the night has unveiled his eyes, the final stanza reveals what he can see rather than what he looks for:

This image wavers, sounds both familiar and strange. Its familiarity, as William Scammell points out in his fine book on the poet, is because it echoes the gospel of Mark (8, 23-6) when Jesus heals the blind man: at first he says ‘I see men as trees, walking’[2]. It is a telling shift. This time the poet almost repeats another writer but has transformed his words. Yet the image still declares that the eyes are not yet adjusted to vision: a state resembling hyperopia where the nearby is blurred and the far off seems near. At the same time the human trees are indeed ‘suffering’, so the confusion is accurate. The poem hovers on the brink of clarity before the assertion of the final two lines.

Each night, then, the poet has told us, as if in a hypnagogic state, he looks on both sides of the door of sleep for the coin – obol or bullet or juke-box token – that will vouchsafe this knowledge, a secret he has no intention of keeping. Of this he will ‘sing’ in his poem, in the poems he’ll write, and ‘sing’ also connotes the activity of an informer (and so, especially in this wartime setting, a spy). Poet and informer, Douglas assumes the role of witness to ‘what the others never laid eyes on’ and thereby his right to speak.

With this ending, Douglas strikes a Rimbaudian note, recalling the line from ‘Le Bateau ivre’ : ‘Et j’ai vu quelque fois ce que l’homme a cru voir!’ This time, though, it is not the repetition of the earlier poet’s visionary argosy, his ‘horizon des mers’, but an actual desert horizon with none of Rimbaud’s vivid and brilliant palette. On the contrary, things are out of focus: ‘I confuse the detail with the horizon’. But it is his own horizon, and he has broken ‘through the looking-glass which touches a man entering a battle’ as he wrote in Alamein to Zem Zem, and now he is not repeating what others have said. He has found his own inimitable tone and the exact language of his finest poems. We hear it resonate in the last stanza of his final poem ‘On a Return from Egypt’ which again employs this brittle, vitreous and premonitory image:

Jamie McKendrick was born in Liverpool in 1955. He is the author of seven collections of poetry, including 'The Marble Fly' (1997), winner of the Forward Prize for Best Collection and a Poetry Book Society Choice; 'Ink Stone' (2003), shortlisted for the T. S. Eliot Prize and the Whitbread Poetry Award; and 'Crocodiles & Obelisks', shortlisted for the Forward Prize. 'Out There' (2012) won the Hawthornden Prize. His Selected Poems was published in 2016, and his most recent collection, 'Anomaly', appeared in 2018. He is editor of '20th-Century Italian Poems' (2004). 'The Embrace', his translations of Valerio Magrelli's poetry, won the Oxford-Weidenfeld and the John Florio prizes.

View all posts by Jamie McKendrick →