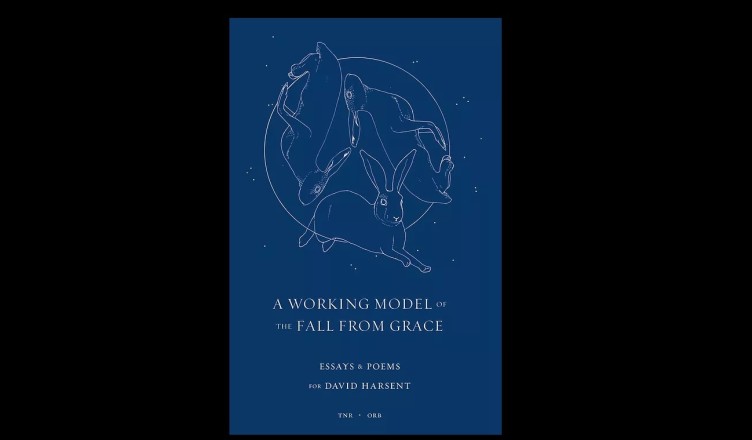 Below is an essay by Lavinia Singer from A Working Model of the Fall from Grace: Essays & Poems for David Harsent, recently published by Offord Road Books in collaboration with The Next Review. The festschrift gathers together contributions in verse, prose, interview and image to celebrate David Harsent’s life and writing career that spans six decades.

Essential fragments: the poems of In Secret and Salt

In a way, it was David Harsent’s poetry that helped lead to my first job in publishing. He was reading alongside Fiona Sampson at the first of the Poetry @ The Print Room series in Notting Hill, having recently published In Secret: Versions of Yannis Ritsos. Gripped, and so moved that I had to buy a copy, it was chatting while waiting for the sluggish PDQ machine to Stephen Stuart-Smith, the director at Enitharmon, followed by a generous recommendation from Fiona, that led to my working there for three years.

Harsent is staggeringly versatile, accomplished in numerous genres. Each project and collaboration seems to offer him an opportunity to experiment further, and, thrillingly, one cannot predict the nature of the next undertaking. But the particular qualities of the short and piercing lyric poems he read that night, heightened in the dark studio space, are just those shared in his most recent collection, Salt, published by Faber & Faber, where I work now. The two books therefore have a special resonance for me personally, but, on a wider level, they both capture an essence of Harsent’s writing that makes it so compelling.

For In Secret Harsent selected the poems of Ritsos to translate that spoke to him most strongly, occasionally adapting them and their titles in his attempt to ‘re-imagine the piece, to test its pulse’. The imagination is unmistakeably Harsentian, not only in setting and content, but also the mysterious methods by which he brings each piece to life.

In Secret and Salt both work through distillation. The poems, fragments in length and in their often-broken syntax, may present a scene in media res or a litany of objects, resembling a tableau or still life. Dramatic effect is created through glimpses, guess and gesture: ‘You could tell / everything from the way they dipped their heads, / unspeaking’. To read, or to glance, is to enter a world of thresholds and twilight zones, often hinging on the prepositional: through a window, on the turn of the stair, at the edge of sleep. Experiences are reflected in mirrors or made strange by moonlight, and the result is to feel curiously disoriented – haunted, even. ‘Dipped’ heads, ‘spooned’ food: these simple words with their precise acoustic patterning – the scenes may be ‘secret’ or ‘unspeaking’ but rarely silent – demonstrate how impressive understatement can be.

In Salt, the poems are untitled; they are, as the author’s note informs, a series that ‘belong to each other in mood, in tone, and by way of certain images and words that form a ricochet of echoes’. The surround of white space – enhanced by the careful design and typesetting – means each image and word is weighed, granted an intensity that is highly potent.

At the book’s launch, Harsent recommended what he considers to be the ideal method of reading the collection: one page per day, allowing space and time to let the words resonate. I tried this with the poem above. Relationships between the pairs and compounds – doublings and oppositions – develop flickeringly, simplifying and complicating by turns. The trios crescendo: bed, bed, kitchen; stair, stair, room. What is being revealed, and what ‘kept dark’? There’s a cunning handling of time, demonstrated in the blend of ongoing present action and closed-off past, which hovers between progress and stasis: does ‘falls’ in the last line bring resolution? The words here, as throughout the series, can play upon the mind in the form of meditation, riddle, or poison.

In both books, ‘the mysteries of domesticity’ – the tacit yet complex exchanges of everyday relationships – are subtly captured: slight movements, traces left after touching, a turned head or raised arm. A reader is unwittingly positioned as a kind of eavesdropper or scopophiliac, stumbling upon these private scenes, attempting to piece together and re-imagine the story. In this poetry, so much depends upon relations of power, and a great deal is handed to the unnamed, indeterminate ‘you’: the ‘you’ who glances, is granted a ‘guided tour’, and even, at times, participates or becomes implicated, ‘your shadow falls to the floor’.

For tenderness is never far from menace. Measured monosyllables of a half-line may threaten deliberately: ‘slow turn of the knife’. Intricately woven images beguile:

Harsent overtly references this poem in Salt, ‘making use of ’ one of its lines on p. 172. The section quoted above is suggested in the compound noun ‘spider-veins’, listed as one of the ‘signs of mortality’ – which is exactly what the image, with its sibilant whispers, is. How insidious, the care exhibited in this small, creative yet deathly act, this nexus, this trap! The tristich form itself is a kind of loaded web; like the Salt poems set close to the centre of each page, untitled and monumental, the focused words acquire the significance of a sacrament or spell: ‘a fragment of speech – something less / than half-said that carried its meaning entire’ (p. 70).

‘Meaning entire’ – so much is meant, realms beyond the domestic. Local, habitual practices encapsulate universal rites of passage: ‘Marriage bed, deathbed, / cold kitchen.’ Each window and stair is Janus-faced, simultaneously pointing inwards and out, forwards and back. Classical figures and mythical stories are re-imagined, imbued with contemporary relevance and pathos. The backdrop of war punctuates In Secret in unambiguous outcry via gunfire, arrests, names on a list, a train taking soldiers to the front. Salt is shot through with visceral details characteristic of a crime scene: ‘bad breath, smegma, spillage and swill . . . Broken glass, graffiti, blood . . . Dogshit, the bloom on rot’. Such substance, physical and raw, leaves an unpalatable aftertaste. The lonely, bare, desperate, and vulnerable are presented unflinchingly – recognisable shades of the human condition. In all these ways, the poems capture what is essential.

‘The soul’s song’; ‘that shadowy figure’. ‘A skitter-skim of light’; ‘the heart-stopped silence’. What can you see? What can be told? Who knows. But I do think that these poems share essential secrets, and that is one of the reasons to keep glancing through and looking in. With Harsent as guide, the horizons are limitless.