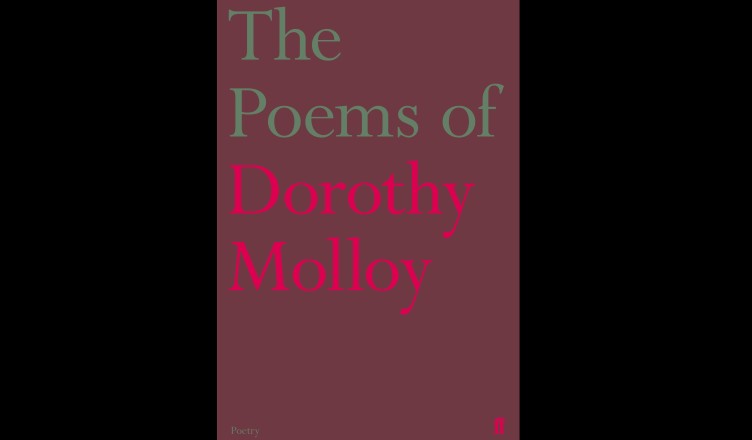 No more wavering… Burn through the parochial states of mind. Cut and burn away to the truth.

This is Dorothy Molloy’s credo, found in one of her late notebooks and published at the start of The Poems of Dorothy Molloy (2019), a collected edition assembled by Faber and Molloy’s widower, Andrew Carpenter. What is striking in this note-to-self, and indeed in much of her work, is not just the violent charge of her language, but also its grit and agitation; this is a woman with a voice so long silenced, it simply has to out.

Tragically Molloy never got to see how others received her poems. Born in county Mayo in 1942, she grew up in Dublin and died just a week before her first and most incendiary collection, Hare Soup, was published to glowing and far-reaching praise. Her further two collections, Gethesemane Day and Long-Distance Swimmer — both prepared from typescript and published in full here — haven’t, in my view, been given the consideration they merit. Certainly, they ‘cut and burn’ less fervently than Hare Soup but there is also a huge amount to admire in them; namely a greater technical dexterity, a more confident line, an ability to transmit doubt and frailty through formal choices: dwindling stanzas, groundhog villanelles, unanswered questions — ‘Will I ever be ready?’ she asks quietly of death. Also included in this edition are forty unpublished poems ordered alphabetically because, Carpenter tells us in the notes of this edition, ‘Dorothy rarely recorded composition dates.’ The result is a fairly bumpy read — poems depicting brutality sits alongside those of gentle surrealism, hospital laments precedes youthful awakening, pets die and then are loved. But once you accept this awkward time signature, what you do get is a heightened sense of Molloy’s poetic reach; how remarkable to convey all that life in just three short collections.

Hare Soup is an astonishing, ferocious first collection that throws flames at the establishment, at the church and at the speaker’s abusers. It is also a collection about female desire and strength. Reading Molly’s poems again, one image kept returning – a Cy Twombly painting (pictured left) because, on some level, both Hare Soup and this painting share properties of energy, danger, anarchy, containment, shock and overwhelmingly of red. In Hare Soup, red begins as a small scarlet flare in the opening poem, ‘Conversation Class’. Here, the speaker’s french teacher, despairing at her ineffectual student, cuts short the class and offers her ‘un petit peu’ of Armagnac. ‘I sluice the liquor back’ Molloy snaps tight the rhyme in thirst. ‘My tongue is loosed’ she goes on, ‘My eyes are glazed. I sing / The Marseillaise. I feel a revolution / in the red flare of my skirt.’ This fleck becomes a brushstroke in ‘A Walk in the Forest’ where a woman in labour declares in short defiant lines ‘I cut the cord / with teeth as sharp as knives, / ingest the afterbirth.’ In the title poem a girl reacts to her abusive host by stabbing him with a ‘canif’ (penknife) until ‘bouquets of old fashioned roses / fall into my lap: petals shot with bright flashes / of scarlet and purple, vermilion, alizarin, / ruby, carmine and cerise.’ In all these examples it is the speaker causing the red, the revenge, the necessary act of violence – ‘If needs be’ the speaker affirms in ‘King’s Paramour’, ‘I provoke / the red gush with mandrake and scammony.’ But red is also sometimes done to her. In ‘First Blood’, a girl is repeatedly raped. She imagines ‘At the back of my head a camera /Pans over the scene. / There is blood.’ Whether received or incited, Hare Soup is a document of damage and it is bruised and bloody: human hearts, in Molloy’s world, ‘come straight from the butcher’s / hook.’

Unsurprisingly, there is no gentle denouement to Hare Soup. A woman’s lot is to be both preyed upon and repressed. Performance becomes a way of concealing and coping. In ‘Family Circus’, a poem that shares strong base notes with Roethke’s ‘My Papa’s Waltz’, a child watches as her father beats her mother, ‘I sit mute as he lashes / at Mamma.’ and then come the devastating lines: ‘I make doe-eyes at Dadda; tap-dance, / do the splits. When the globes hysterics / swells in my throat, I swallow / my tongue.’ There are frequent poems about the inherent danger of exposing female sexuality. In ‘Mad about Jose’ a wife asks her husband for a kiss only to be answered with ‘His fist on her backbone, he pushed himself / in. Knuckled down, cracked her sternum, came yelping / his paws on her rump.’ Female desire is thwarted, beaten, torn.

Escape in Hare Soup happens fleetingly. When the speaker travels to Spain or France, foreign words are italicised for their otherness – ‘Pate de foie gras’ a flamboyant tease next to ‘cold cuts’. But these interludes appear in an unreal soft focus, almost like a flash back as if Molloy doesn’t want us to forget the principle narrative of home, of what she knows. ‘It might have been me, had I stayed [in Spain], strolling in spring – time / Through acres of pink almond trees /But /The north wind havocs my face / I no longer belong /In this place.’ Back home escape happens through the imagination; it takes on a mild surrealism in poems like ‘The Woman on the Hill’ where the speaker dreams of becoming the forest she stares at: ‘I grow dark as the forest // I slough off my skin.’

Gethsemane Day carries over Hare Soup’s violence but at an eery, disquieting remove. ‘Happy Families’ is a chilling metaphor of parental abuse where the speaker ‘blows out the light for Dadda’ and ‘when I got tired, Dadda / took out his hand to shuffle and deal, shuffle / and deal. He made me split the deck; taught me / the three card Trick, showed me the Joker.’ Soon the speaker cannot find her heart ‘But now the rogue [heart]will often / disappear, and leave me /stranded in my scarecrow /mind.’ With greater distance comes more considered technique, and ‘Pedicure’ is a good example of this: Molloy uses longer lines and softer rhymes to transmit tenderness and pleasure —

By the time Long-Distance Swimmer is written, illness and acceptance of it is upon Molloy: ‘I used to be yearning / But now I’ve no time for such things.’ Despite the lack of energy to fight as she used to, there is still a defiant independence to Molloy’s verse and some wonderful images that take you by surprise: ‘the heavy of your hair / floats like a raft on the spot’ describes a drowning girl and in ‘Moult’ a woman finds her cancer as ‘a crop of spuds under her arm.’

Where abusive men once dominated the page, it is now Molloy’s cats and dogs that pad through this quiet final collection and much of the unpublished work. Like Plath’s bees and crows, these pets are Molloy’s familiars. In ‘Family get-together’ it is only her ‘one little bitch’ that can cross the divides of the family, that can move from lap to lap and be loved simply and wholly. ‘Spayed’ and ‘Talking Legs’- two previously unpublished poems about her pet dog, sit side by side now as dog and owner would likely have done. ‘Quadruped’ is written from the cat’s-eye-view and ‘Peregrino’ and ‘Dog-kite’ trace the demise of Molloy’s cat with a poignancy that gestures to her own. These are heart felt and tender poems that transmit the profound love Molloy felt for animals, far more, she admits, than people: ‘people — I take them or leave them.’ Michael Longley had it right in his elegy to Molloy, in which he describes how, upon seeing the ‘white tail tip’ of a fox approach a duck’s nest, he ‘started to worry so / About the mallard’s deep nest-well, / As Dorothy Molloy would worry.’ As well as her touching animal poems, there is one narrative poem worth singling out. ‘Waiting for Julio’ describes the waste of a soldier’s life and and reads like beautifully paced, quiet and devastating short film. But there are also a handful of poems in Swimmer that feel a bit off-the-cuff for Molloy’s eye – I wonder, had she lived to see them assembled here, if she’d have made some cuts.

Reading this edition, her entire life’s work, I felt Dorothy Molloy approach. I sensed her fierce independence, imagined her in a rush through Dublin streets, her clear voice calling out, her formidable single mindedness. I began to fall for her love of life, and her will to test it —‘Like some bright Joan of Arc / upon the Pyre / I loved the fire’ she writes in a late unpublished poem. Reading her also made me think about how profoundly awful poetry readings can be when the poets assume their own damage is reason enough for the poem’s existence. Molloy, in stark contrast, makes language work for her, she mixes her own colours with those of language, form and image and presents it to us, transformed. Molloy is not concerned with the accuracy of events but with the experience of living — at her best she communicates something of our essential human condition, the ‘mandrake and scammony’ of our lives once all the branches are cut and burned away.

G.E. Stevens is a published poet and critic living in London. She studied at Trinity College, Dublin and Ecole Normale Superieure in Paris. G.E. Stevens is currently completing a poetry MA under Lavinia Greenlaw and will shortly be beginning a practice-based PhD at Royal Holloway. She is working on her first pamphlet.

View all posts by G.E. Stevens →

The Poem Not Taken: Robert Frost and the inaugural tradition that isn’t

Fifty Forty: on the incomplete histories of Carcanet and the LRB

On the poetry of George Kendrick