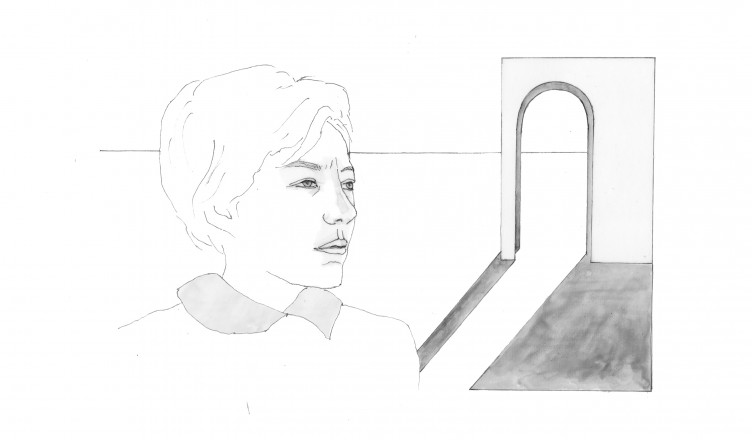 I met Alejandra Pizarnik in Buenos Aires, in 1967, five years before her death. I had asked her to contribute to an anthology of texts that purported to continue an interrupted story begun in Shakespeare’s A Winter’s Tale: “There was a man dwelt by a churchyard.” She agreed and wrote a haunting piece called “Los muertos y la lluvia”, “The dead and the rain.” The book was never published but thanks to our meeting we became friends. She was ten years my senior, and yet she always seemed the younger of the two. In fact, Alejandra always seemed younger than everybody else, partly because she was small and slight and impish, her hair cut short and her slight fingers busy, and partly because she spoke with the assurance of a child, pointing out simple truths that everyone else was too grown-up to notice.

Her habitat was the minuscule apartment she occupied in down-town Buenos Aires. She had travelled to Paris (a trip which nourished her imagination long after her return and during which she met Julio Cortázar and André Pieyre de Mandiargues, two key figures in her life), but after that, she barely left the enclosure of her four walls where she wrote, slept (badly) and met with her friends. By her desk, was pinned a line by Artaud: “Il fallait d’abord avoir envie de vivre,” “First of all, you needed to want to live.”

The furnishings of the room were sparse: the desk, a bed, a few books and a small blackboard on which she worked out her poems, like a sculptor chipping away at a block that, she knows, contains a few essential, precious words. All her craft was to get to that hidden core within a complex mass of thoughts, images, intuitions, breaking down a poetic argument to reach its essential denominator. She would write sentences on the blackboard and then, day after day (or night after sleepless night) she would erase word after word, replacing some, leaving others out, until, eventually, and at the cost of a great physical effort, she would allow a verse or two to stand, hard and brilliant as diamonds, which she would then copy out in her notebooks in a tiny, regular schoolgirl’s handwriting. “To write is to give meaning to suffering,” Alejandra wrote in her diary in November 1971.

The Jews have an expression –“to suffer the world”– which my grandmother liked to use, usually accompanied by a long sigh. Alejandra suffered the world in a visceral way: physically, when her asthma prevented her from breathing normally and she lay in her bed suffocating during long nights of insomnia; and mentally, convinced that her neighbours persecuted her by deliberately banging on the walls and making noises to keep her awake, and haunted by what she felt as her mother’s absence: “To renounce finding a mother,” she jotted down another day, perhaps as an attempt at consolation.

Everything she did seemed to follow a paring-down method, whether attempting to understand the agonies of her body and mind, or put into words the illuminations of her art. She applied the rules of her poetry to her psychoanalysis, attempting to find what she called “an aesthetic core” to her illness, and she allowed the truths thrown up by her unconscious to be distilled onto the page. In her reading too, she attempted to find the centre: in her husky, breathless voice, she would discuss a story by Kafka or a poem by Olga Orozco, a joke of Silvina Ocampo or a stylistic device of Borges, La chartreuse de Parme or a line by Alphonse Allais, as if following an ascending spiral until she reached the focal point. One day, as if it were the most obvious thing in the world, she recited for me a line of Michaux’s that summed up that quest for the core question. “L’homme, son être essentiel, n’est qu’un seul point. C’est ce point que la mort avale,” “Man, his essential being, is one single speck. It is that speck that death devours.”

But she clearly realized that even such sublimating tactics could only approach the central truth of what she was trying to say. “I’ve thought of a literary genre that would suit my poems, and I think it could be that of approximations (in the sense that poems are approximations to Poetry)” she wrote in a letter in 1969. She accepted such limitations as part of the poet’s lot.

In spite of the suffering, what I remember most vividly of Alejandra is her humour. If she saw the world as a monstrous, bleak place, the vision provoked in her, at the same time as the anguish, an almost ecstatic laughter, a exultation akin to that of the literature of the absurd and the humour noir of the surrealists. Whether reviewing Valentine Penrose’s atrocious story of the Countess Bathory or commenting on the erotic nightmares of Georges Bataille, Alejandra saw the joke behind the horror, the colossal foolishness of our human condition. Even as reflected in herself, she made fun of the pain. “Terror of being well,” she confessed in her diary, “being punished for every minute in which I’m not distressed.”

During her short life, Alejandra published eight small books that have earned her a fundamental place in poetry in Spanish. Her forerunners were the Arab-Andalusian poets of the Middle Ages, as well as Quevedo, San Juan de la Cruz and Sor Juana; to these she later added her readings of Rimbaud, Yves Bonnefoy and the French surrealists. Eventually, her poetic vocabulary became unique: echoes of the Spanish of the Golden Age and of the laborious games of twentieth-century French poetry can be heard in the background of her writing, but they are never allowed a full presence. Alejandra’s style is too ascetic, too demanding for any such intrusions and the words she chooses to allow onto the page must undergo frightful ordeals of expurgation. As in fairy-tales, only a handful of those who survive the terrible tests are allowed in the end to live happily ever after.

In her diary, on 30 October 1962, after quoting from Don Quixote, (“…but what pleased Don Quixote most was the marvellous silence that reigned in the whole house…”) she wrote: “Mustn’t forget to commit suicide.” On 25 September 1972 she remembered.

Alberto Manguel was born in Buenos Aires, lives in New York, and is a writer, anthologist, translator, essayist, novelist and editor, author of numerous non-fiction books - The Dictionary of Imaginary Places, A History of Reading, The Library at Night, Homer's Iliad and Odyssey: A Biography, and novels such as News From a Foreign Country Came. He has received numerous international awards for his work including Chevalier de l'Ordre des Arts et des Lettres, France.

View all posts by Alberto Manguel →