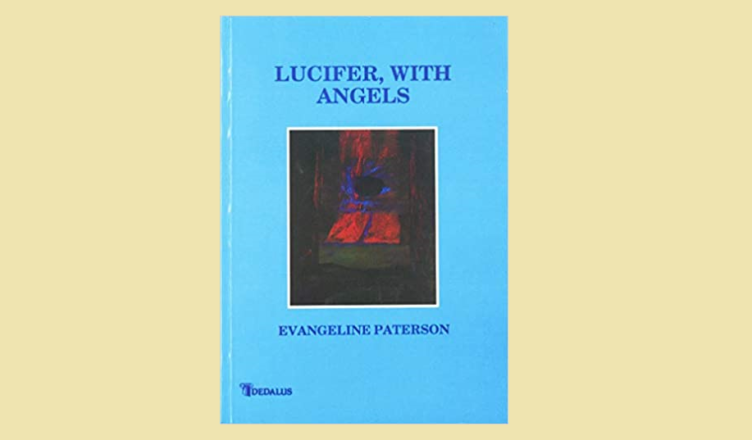 Blurbs tend to get a justified bashing these days for their breathless praise and jargonised code, and there’s no doubt the current trend is towards their use purely as a marketing tool. However, in the past they tended to be more nuanced. In fact, browsers at bookshops often relied on them to dodge a bullet or to discover unexpected treasure. One such example is Anne Stevenson’s back-cover endorsement of Evangeline Paterson’s selected poems, Lucifer, with Angels (Dedalus Press, 1994). It reads as an excellent summary of her work and provides this essay with an ideal point of departure:

There is an exhilarating wide-openness about Evangeline Paterson’s work. Free of mannerism and self-conscious effort, her poems flow naturally and unembarrassed from a lyrical source that is not untampered by wit. Evangeline Paterson keeps her balance without sacrificing her strength of feeling. Her poems are wise, very womanly, but they are never preachy. They are perfectly clear without lapsing into cliché or sentimentality. In a juster world, her books would sell in thousands; her popularity among those who still believe poetry can be a comprehensible and entertaining art is assured.

The above text was, of course, written well before Evangeline Paterson’s death in 2000. However, if her poetry was somewhat side-lined during her lifetime, it’s been even more marginalised by the wider poetry community since her death, in part due to an absurd pigeonholing of Paterson as a religious poet. That’s not to say faith wasn’t a girder in the construction of her poems, but it is to clarify that many delicate, never preachy layers are present even in certain pieces that continue to be used in services and sermons to this day.

One such example, and perhaps her most famous poem, is ‘A Wish for my Children’. It’s still widely quoted and Gordon Brown, for instance, read from it at Damilola Taylor’s memorial service. It’s drenched in self-effacing wit, as in its closing lines:

In fact, in thematic terms, there’s a strong argument that Paterson’s speciality is the perceptive empathetic observation of human relations, loaded with understanding and compassion for the invisible limits we place on ourselves. The ending to ‘Incident in the High Street’ provides an excellent example:

The above extract is also illustrative of Paterson’s use of line and language. Her sentences flow with a natural, inevitable ease, while she encourages syntactic structures to chafe against line endings to emotional effect. Moreover, any judicious invocation of abstracts is always undercut by a juxtaposed element of physical experience, such as the teashop in this poem’s penultimate line, yet another example of her dry wit.

Paterson’s poems are packed with a cast of characters that come alive with a flick of her pen, such as Auntie Grace, who’s ‘unsure on her feet/but head screwed on”, or Moriarty, the publican, who ‘draws pints/all night with an arm like a lever” or Mrs Kavanagh, who’s beautifully portrayed throughout the poem ‘Leaving for the Hospital’, which concludes with one of Paterson’s most remarkable quatrains:


The cadence shifts delicately as the quatrain advances, accelerating in the last two lines to reflect the car’s movement away from the house. This shifting cadence, in turn, adds to the ending’s subtle yet dramatic emotional impact.

At this stage, it’s worth underlining the breadth of Evangeline Paterson’s geographical and historical reach. In no way should she be labelled as a parochial poet. She has excellent poems against apartheid, poems of myths and histories from a host of different countries and cultures, such as ‘Pyotr’, which shows her range in its startling opening lines…

And then, amid all the surprises, there’s a remarkable eco poem written long before the term had been popularised. Titled ‘Non-Biodegradable’, it begins as follows:

Page after page, Evangeline Paterson moves the reader intensely. Lucifer with Angels has accompanied me now for twenty-five years, ever since I bought the book following her encouragement to me as a young poet. She was the first magazine editor (at Other Poetry) to accept my work for a decent journal, and my gratitude soon turned to admiration.

Paterson not only deserves four-figure sales figures, as mentioned by Anne Stevenson (who’s an underrated figure herself), but she also merits wider critical recognition as one of the most outstanding poets of her generation At this stage of the game, the gaping absence is a Collected Poems, a chance to read all the poems from her earlier books, Bringing the Water Hyacinth to Africa (Taxus, 1983) and Lucifer at the Fair (Taxus, 1991), plus her later work, which remains uncollected and inaccessible to the reader to this day. The first question, of course, is who might publish such a book. The second question is who might buy it. Over to you…