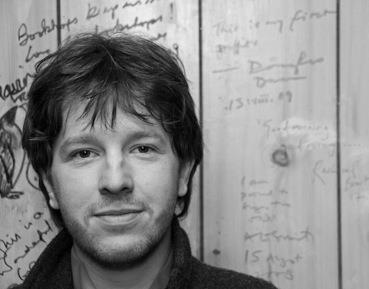 In his second pamphlet, Ballast Flint (Small Press Publishing for Cromarty Arts Trust, 2013, with artwork by Hannah Fry), and in his most recent, First Hare (Mariscat Press, 2020), Richie McCaffery mentions the idea of showing one’s working-out in an exam. This display of process is not to validate a result – the answer may be incorrect – but to gain at least a little credit for going about things the right way. Whether this is a guiding principle or not, McCaffery is quietly focussed on both his own process as he moves through his days and that of many who came before him or who he stumbles across. No answers are promised: the enquiry is all.

McCaffery’s biography is easily pieced together from the backs of his two collections and three pamphlets. Much of his poetry deals with some version of his life and times, his up-bringing and early experiences, the social and professional world in which he has found himself. His immediate family, in particular, is inspiration threaded through his poetry like veins in granite, a material referenced in an early poem:

This is the poem in its entirety. Even at this early stage, McCaffery knows how to string a necklace of images to lie sweetly around the physical and emotional entirety of a person. It is well-balanced, the retro-contemporary images leant against the “standing granite” of “Victorian grief”, his pregnant mother figure a counterpoint to the obdurate melody of misfortune. There is subtlety: the pink obelisks and the blue fingers presage the coming child while the foreboding image of the “Kestrel” is immediately brought to earth by the realisation that it refers to a brand of lager not a bird that a knave might aspire to own. This fusing of images into a tightly grained piece of art is something we shall see more of as McCaffery’s style develops.

A mother figure is the abiding spirit of his first pamphlet, Spinning Plates (Happenstance, 2012) and features also in many of the publications that followed. Other family members are also present, but his writing about this mother shows him learning his craft with a material that surely needs to be handled with particular care. There are poems about nothing but himself – it would be unusual if this were not the case, from a young writer – but by stepping back into his own imagined or known pre-history he is able to adopt an empathy that belies his own part in the story. This choice of subject is accompanied by leaps of imagination, for instance in the title poem, ‘Spinning plates’:

His process, here and elsewhere in his early work, is to find a simile that is only just workable. There is much in this example that is wrong – although the “bone” of “bone-china” suggests a body – but it succeeds as a whole in being right. It is the work of a writer risking much to test what ideas a poem can stand to bear. Or, rather, it is a bone-china plate spinning on the thinnest of sticks.

As a poet matures such showmanship may become less necessary. In a poem published more recently referencing his, or a, mother, ‘Sports days’ (in First Hare), the flourishes of figurative language are replaced by layers of statement, each of seemingly insignificant value, but the whole metamorphosed by compression. This poem is fourteen lines, mostly rather simple language (mandatory is the most complex word, but entirely apt here), laid down in mostly iambic pentameters, unambiguous of meaning, modestly demotic:

These are the last four lines of the poem, and they say much about this mother-son relationship, not least that son has become the mother. And perhaps many of the poems about this mother figure and the poems featuring a father, grandfather and great grandfather and about uncles and aunts and nephews are about the poet himself. McCaffery is perceptive in his self-analysis. In the poem ‘Sighting’ from his first full collection, Cairn (Nine Arches Press, 2014), written ‘after Derick Thomson’, the late Scottish poet, he pursues the idea of our lives having been lived by others before us. This is not to be taken literally – McCaffery is nothing if not clear-eyed and sharp-minded – but as a tool for discovering what we are now. The poem’s final stanza declares:

And in the poem ‘Gil Martin’ from the same collection, his rumination on the narrator growing up wearing second-hand clothes – “I’d go to school in George’s best shirt, / in winter wear Robert’s cenotaph coat” – is pursued to its hallucinatory conclusion:

The resonance of the phrase, “dearly departed” hardly needs pointing out, or indeed the religio 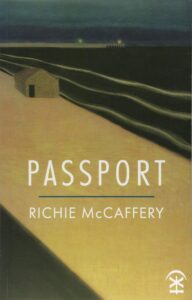 us weight of the word “host”. Despite a growing simplicity and restraint in his use of language, McCaffery’s continues to say one thing and mean another. He has the knack of assembling random items that might be gathered for an exercise in still-life in such a way as they begin to explain each other. Innocuous, forgotten, cast-aside inanimate objects become the starting points for many of his poems. In ‘Pebbles’ from the pamphlet Ballast Flint, these most inanimate of objects have, by the end of the second short stanza, become representative of much more: “…he was a well-rounded individual, for sure.” In the same collection, the poem ‘Antimacassars’ uses a domestic item adorning an armchair to explain the later silence of a late aunt, and a barometer and Worcester ballerinas reinforce that process.

Whether McCaffery is writing about himself or a version of himself is something he has discussed in a recent blogpost on his Lyrical Aye website and certainly he doesn’t commit himself to either status. Typically in his poem ‘Ballylar, Fanad’ from his second collection, Passport (Nine Arches Press, 2018), which begins with his second reference to sash-windows (there’s a wonderful poem ‘In Praise of Sash-Windows’ in Cairn), we come across him catching what may be his own eye:

There are other poems in Passport that show McCaffery applying – now perhaps with more confidence – his process of analysis through observation. Here are poems of that reference what one might reasonably easily glean of his life, in particular his relationship with his partner Stef and their triangulation between Scotland, Belgium and Northumbria. For a writer who is so determined to find interest in the most unpromising of environments, it is perhaps inevitable that Belgium should occupy so much of this book. The complexities of what we must assume is his relationship with this country are played out in poems that are troubled by the nature of belonging. So, here, from his poem about one who interprets omens or/and watches birds, ‘Auspex’ (after the Flemish poet, Roland Jooris):

His experience of a new language colours his relationship with his temporarily adopted home town of Ghent, as in the poem ‘Beeldenstorm’ (a Flemish word relating to the destruction of Roman-Catholic properties in the Low Countries in 1566):

It was not to be enough. And in McCaffery’s most recent collection, First Hare, he and Stef find themselves in (and in his case, returned to) the north of England. The final stanza and a half in the poem, ‘Stef’, offer us a partial explanation:

As important are the poems in this pamphlet that speak of the dislocation McCaffery experiences – has perhaps always experienced. In the poem ‘Falling’, about a Great Grandfather, the narrator’s own trajectory becomes the subject:

In this collection, after nearly ten years of publishing poems and doubtless many more years of writing them, McCaffery’s work has found its way home again. He is still working away on the nature of family and on the resonances of objects, but there is a greater openness to allowing a story to tell itself, including the story of what might be his own self. He has arrived at the stage of no longer needing to foreground flashes of imagination or to overload an image or too strongly draw attention to a moment. In the later works of the selection under consideration, is poetry that is quietly assembled, lines placed carefully to carry the load, its music subtlety melodic, the pieces concise and seemingly undemanding.

For although McCaffery may have done much of the pre-thinking for us – assembled the objects and recollections, pitched the voice, chosen the resonance – he leaves us the sharp, dark pleasure of appreciating quite how brilliantly the whole is made. And McCaffery poems are of a whole, typically short, restrained by a final line or phrase that although often acutely observed does not, for the reader, finish the poem but leaves us with a sense that what is unsaid has rather a lot to say for itself. For which reason, and to illustrate this point, and because there are no conclusions necessary other than the poetry, here is a complete poem, selected almost at random from his most recent full collection, Passport, and with a deft title that would make a fitting alternative title for this review:

Richie McCaffery’s two Nine Arches collections Cairn and Passport are available to Wild Court readers at a 25% discount when purchasing via the Nine Arches website. Just use the code RMC25% at checkout.

Jonathan Davidson is a writer, reviewer, memoirist and poet. His most recent publications are 'On Poetry' (Smith|Doorstop, 2018), a volume of memoir and criticism, and 'A Commonplace' (Smith|Doorstop, 2020), an unorthodox assemblage of poems, footnotes and grid references. His dramas have been widely broadcast on BBC radio and he has produced six touring theatre-poetry productions with Bloodaxe Books. He lives in the English Midlands. www.jonathandavidson.net.

View all posts by Jonathan Davidson →