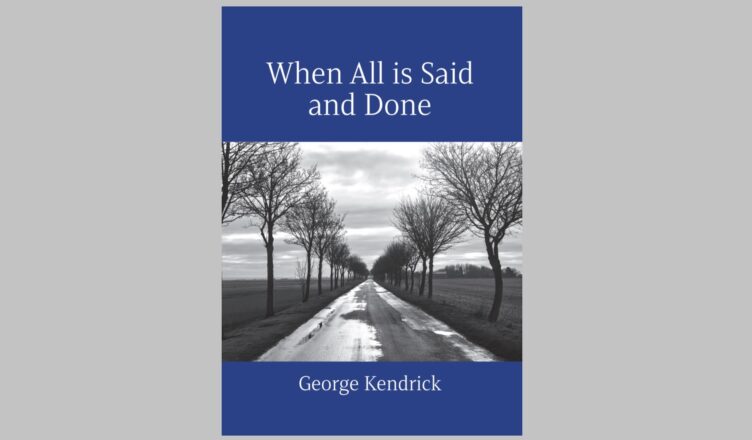 Let’s take a forgotten poet who went from publishing with Carcanet, garnering a PBS Recommendation and receiving excellent reviews in the broadsheets in the process, to barely appearing in Google searches for his name. Let’s chuck in an almost cinematographic biography with enough intriguing details and mysterious gaps to set a screenwriter’s pulse racing. Let’s top it with off with a dedicated small publisher who’ve finally managed to bring together a Selected that’s taken from an unpublished manuscript and a generous wodge of work from the first book. Let’s assume his work must have been neglected for a valid reason, and let’s guess that the poems themselves probably aren’t much cop when we read them decades later. Except they are. In fact, several of them are outstanding and deserve a place at the top table of 20th century UK poetry.

The poet in question is George Kendrick. Born and bred in Hull, Kendrick published his first full collection, Bicycle Tyre in a Tall Tree, in 1974. However, in the late 1980s, his marriage having ended, he abandoned his safe career as a college lecturer, set sail for France and started a new life with a new family that was cut short by cancer at the age of fifty-eight. At the time of his premature death, he was preparing a second collection.

LegalHighsPress have now brought together the best of his known work in a new volume titled When All is Said and Done. There might apparently be more poems, as yet undiscovered, but that’s another story, another potential essay in due course, and a diversion from the sheer quality of this batch of excellent poems. For the moment, we should feel fortunate to have access to them, thanks to the unselfish work of the editors. Moving on to the contents of When All is Said and Done, George Kendrick’s range is wide. He can deal with family and generational shifts via the clear-eyed observation of detail, as in ‘Mother’s House’…

And he can switch from bathos to hyperbole within a single poem, playing both off against each other, as in the opening and closing lines to ‘Dead Tortoise’…

This quote should clarify that Kendrick was far from being an aspirant to membership of the Movement, nor was he a Hull-based acolyte of Larkin and Dunn, nor could he be lumped in with other Northern poets of his generation such as Stanley Cook, who preferred to remain anchored within anecdote and observation. In fact, that very knack for shifts in tone is a key component in making Kendrick’s poetry stand out. He possesses the abilityto play with register, voice and cadence, and to vary them at will without losing control, in harmony with a poem’s overall effect and aims. Here’s another such example, a poem called ‘The God Child’, which is now quoted in full (with the publisher’s permission):

The above poem also displays another of Kendrick’s qualities: muscularity. The mere invocation of this term is often enough to make a sensible critic wince, as so-called muscular poets are often linguistic bodybuilders, pumping verbal iron, striking artificial postures. However, in Kendrick’s case, it’s a hugely positive attribute, expressed via his ability to flex and relax his lines.

One key manifestation of muscularity in his work is in the way he often groups three strong syllables together. Very seldom do they squat in the middle of a line in George Kendrick’s poetry. Instead, they straddle lines, often consisting of two monosyllabic words followed by a longer word that stresses its first syllable before flowing into a fresh rhythm. In the poem in question, dance;/stars/galaxies provides us with an excellent example of this technique. As always in his work, there are counterpoints and balance, pauses and acceleration.

Moreover, just as the reader thinks the poem is heading off on a linguistic, self-indulgent riff, Kendrick yanks us into a concrete context via the invocation of Miss Wilkinson, before bringing matters to an end by undermining her and implicitly leading us back to the previously portrayed magic. Every single word is working to layer nuance on nuance.

In other words, the concrete, the abstract, the impossible and the everyday all come together here in the space of ten lines. What’s more, they complement each other to create something new. This breadth of ambition, this straddling of supposedly contrary poetic aesthetics, is an outstanding quality of Kendrick’s writing, ensuring he can’t be pigeonholed. Of course, there’s also a valid, contrary perspective, which might well argue that his slippery, idiosyncratic approach became one of many reasons why critics, editors and publishers lost him from view.

The key question now is whether George Kendrick’s poetry will once more slip below the waterline. When All is Said and Done was published in August 2020 and has attracted little attention so far. Of course, Kendrick himself was only too aware of the ephemeral nature of things, so here are the closing lines to ‘Reflections on Myself’ by way of conclusion and as an indirect and blatantly direct appeal to generate more readers for this unjustly neglected poet: