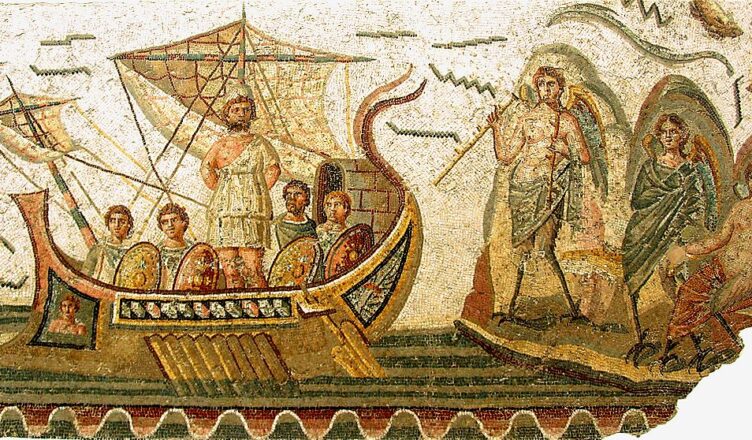 Tennyson’s nuanced reworking of Homeric epic in his Ulysses (1842) is monumental in its binding of ancient and modernist narratives. The layered intertextuality and multiplicity of Ulysses as a symbol of masculine heroism in decline works to express Tennyson’s own personal expressions of grief and loss. This transcendence of time and text perfectly illustrates the sensation of mourning as an indiscriminate force of the human condition that permeates all temporalities; and is just as prevalent in contemporary society as we read it in works of classical mythology.

Certainly, this notion of continuity through time is not confined to our historical understandings of the poem, but also embeds itself within Tennyson’s writings as a commodity to be won through physical and spiritual voyage. The poet’s ambiguity surrounding time as a destructive force in bringing the imminence of death is paradoxically offset by the ignorance of Ulysses in his feeble attempts to deconstruct time and mould its trajectory and speed to his own impulses. Whilst previous scholarship has acutely focused on the textual traditions of Homeric implication on Tennyson’s Ulysses.[1] I would focus more narrowly on the inwardly facing narrative of the poem, as a melancholic reflection of Tennyson’s struggle to come to terms with the finality of endings and the death of his late companion, Arthur Hallam. I believe Tennyson’s narrative operates outside of the constraints of ancient myth, and instead employs the hypermasculine character of Ulysses to communicate the pressures of the male experience, particularly with regards to our conceptions of heroism. Of course, in this poem Tennyson refers to the heroes of Homer, but reading from a post-Tennyson perspective, we can perhaps draw parallels between Ulysses as the war hero, and Tennyson as a literary hero of Victorian sensationalism. As coined by his late companion, Tennyson was the ultimate ‘poet of sensation’[2], and Hallam was very much at the core of his expressions of the universality of masculine sensations of mourning.

The opening of the poem provides the fundamental social framework for the poem to operate within. Almost immediately, we are confronted with Ulysses’ disillusionment with the conventional responsibilities that are bound up with the stationary life, where he idly rules a ‘savage race’ (Ulysses, 4) who ‘know not me.’ (Ulysses, 5) Certainly, this instance in particular draws reference from Dante’s conception of Ulysses in his Inferno, whereby his character is punctuated by a specific ‘zeal… / T’explore the world.’ (Inferno, 26.97-98) This crisis of identity places Ulysses on the periphery of domestic life and creates a significant gulf between Ulysses and his subjects. Arguably, this may hold colonial implications, whereby Tennyson seems to be isolating Ulysses not only on the grounds of class, but in terms of race. However, if we are to observe Ulysses as a facilitating figure of the poet’s own consciousness, this paranoid sense that he is unknown may allude to a greater hubristic essence of the poem, which is overtly transferable from the poet to the subject in curating an everlasting legacy and immortalising oneself through literary means. Tennyson as the poetical ‘moral tutor’[3] in this case may express Ulysses’ fading identity and sense of self in relation to his travels as a theoretical backdrop for exploring Victorian conceptions of fluidity and ambiguity in relation to the self image of the modern man.

Spatiality of the soul and fixations of legacy seem to preside over the narrative of Ulysses. Such expressions of a desire for permanence manifest in his assertion that ‘I am become a name’ (Ulysses, 11) in being ‘part of all that I have met.’ (Ulysses, 18) This notion that the ultimate value of the individual is located at the site of his name reinforces our conception of status as a culturally imparted prerequisite of the socially mobile man. Perhaps, in this case, Tennyson places a particular emphasis on the projection of Ulysses’ social agency in order to compensate for his now stationary life. The soul of Ulysses seems to have been distributed across the corners of the world on his travels, thus adding to the importance of spiritual voyage in relation to the poem’s spatiality. This fragmentation of the soul, in Ulysses’ ignorance, seems to provide a means of evading death by immortalising certain parts of himself in memories of the past.

The mechanism of memory as a means of preservation ‘allows Ulysses to sustain the galling illusion of heroic quest, just as it undermines Tennyson’s resolve to go on living after the death of Hallam.’[4] Ulysses seems only able to place this desire for voyage in relation the limits of mortal action. Not only this but he seems to place himself at the pinnacle of intellectualism by seeking ‘To follow knowledge like a sinking star / Beyond the utmost bound of human thought.’ (Ulysses, 31-32) This preoccupation with blurring the lines between where life and death intersect is a significant feature of Tennyson’s literary imaginings and aligns with this notion of continuity making the reader unable to distinguish between Ulysses’ conception of where life gives way to death. Furthermore these preoccupations of life and death seem to ‘each constitute the site of other’s meaning and value.’[5] Tennyson’s skilful interplay of the conditions of humanity as a continuous movement throughout the poem places the concept of time at the centre of this power struggle, towing the line between mortality and the otherworldly. Certainly, Tennyson’s ambiguous treatment of such conventionally distinct locations encourages us to perceive death as another form or extension of the self by this deconstruction of rigid Victorian notions of definitive categorisations.

Ulysses’ direct address to the mariners is what I believe to be the most significant expression of Tennyson’s commemoration of Hallam. The mariners are imagined to have given their ‘souls that have toil’d, and wrought, and thought with me.’ (Ulysses, 45-46). This intellectualisation of companionship in this instance is undoubtedly a manifestation of Tennyson’s grief in processing the termination of the most impactful relationship of his life. The extreme value placed on the soul may allude to some hope for its immortality as the location of virtue according to traditional Victorian belief. Certainly, the ambiguity of the soul and its conditions seem to act as a consolation for Tennyson, aiding in his ambitious reimaginings of the limits of death. Furthermore, Ulysses not only immortalises the legacy of the writer, but it becomes a site of mourning in itself. Tennyson’s writings in dedication to Hallam become extensions of the different sites of the poet’s consciousness, reinforcing the ‘soothing power of memory’[6] as a bridge between the living and the dead.

If we are to conceive of the narrative of Ulysses as a spectacle of sensationalist mourning, this has significant social implications in rethinking masculinity as a linear construct. Ulysses and Tennyson as possessors of ‘heroic hearts’ (Ulysses, 68), bend traditional notions of masculinity and how we read male heroism in literature of all periods. Victorian society left no room for male displays of grief,[7] which in turn gendered the process of mourning and attached shame to the practice of remembering the dead. This social tradition of gendering processes surrounding  death is a significant feature of sensation writing, and one that permeates Tennyson’s confrontation of the male experience. The picturesque notion of death as the ‘eternal silence’ (Ulysses, 27) provides a somewhat effeminate romanticism of the ambiguity of death, whilst pursuing this reluctance to accept death as the termination of consciousness in its totality.

Furthermore, Tennyson’s Ulysses is deeply complex in its layered dealings with intrinsic issues of the human condition such as mourning and gender across classical and modernist temporalities. Time acts as a universalizing force that binds such literary narratives, broadening our perception of such fundamental issues as having radical agency in their operation within the lives and works of writers and their subjects. Tennyson was certainly a pioneer in breaking down rigid binaries of Victorian literature and most specifically here exposes male realities of suppressed consciousness. The literal nature of the poem’s narrative as a spiritual voyage navigates notions of evading death through spatialising the soul by allocating different parts to specific memories. However, such memories are saturated by the poet’s grief, which forces an acknowledgment that death pervades all; and the only way of evading the ‘eternal silence’ is through immortalising the self through the medium of literature.

Lily is a writer and classicist, currently studying for her MA in Modern Literature and Culture at King's College London. Her essay 'Conceptualising the "good death": Mechanisms of memory & mourning in Tennyson’s "In Memoriam"' appeared on Wild Court last year.

View all posts by Lily Searstone →