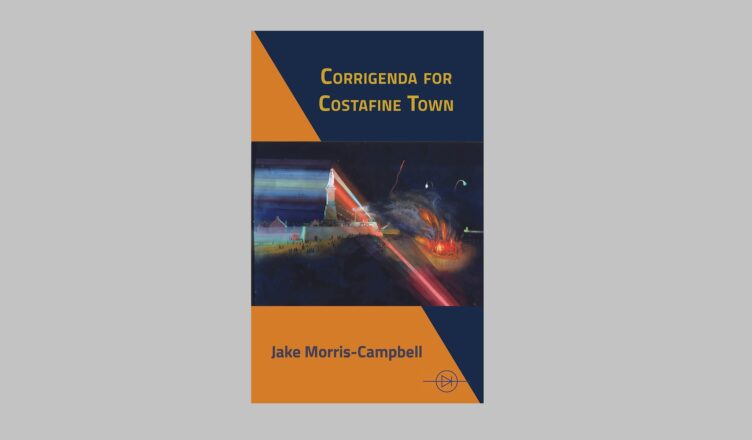 The first edition of Alasdair Gray’s debut collection of short stories (Unlikely Stories, Mostly) carries with it a little snippet of paper saying ‘Erratum: This slip has been inserted by mistake’. A wee postmodern gimmick, but a funny one nonetheless. Copies of this book are rare nowadays with that original erratum slip, and I wonder if Jake Morris-Campbell’s first book-length collection, Corrigenda for Costafine Town (Blue Diode, 2021) will suffer a similar fate, as it has two separate prose-poem erratum slips inside it. This, however, is a collection recurringly hung-up with corrigenda, errata, how the poet of place (which Morris-Campell incontestably is) provides marginalia and annotations on the manuscript of a hometown, in his case South Shields, the ‘Costafine’ town of the title, taken from South Shields band Splinter’s 1974 song. Sometimes the past is written, sung and documented, sometimes it isn’t, sometimes it’s forgotten by its living denizens and it’s the task of the poet to remind them. Crucially, Morris-Campbell is not just fixated on the past, he also envisages the North East coast as potential, a promising sheet of blank paper ready to be folded by an origami artist, as in the first ‘Erratum’ slip ‘Stray’:

… I became obsessed with making and re-making origami models of Costafine Town: taking a sheet of paper and folding it as many ways as I possibly could to try and override or improve upon what I saw and how I felt, before collapsing it and attempting to flatten it out and simplify it once more. But as anybody who’s worked with paper modelling in this way before will attest, the folded sheet of paper cannot be made perfectly even and blemish-free once it’s been worked. All of those folds refer to some prior attempt to do something.

The art and history of a place, then, are the product of layers, strata of human striving and this is the story of Morris-Campbell’s additions to it. It reminds me of Laura Marks’ theory of ‘enfolding’ (in relation to Islamic art), that anything new we come up with, creatively speaking, is subject to the historic forces that are fundamentally latent and enfolded within it, which is sort of a variation on Eliot’s concept of ‘belatedness’ in his keystone essay ‘Tradition and the Individual Talent’ where he asserts that best and most original poets are those where the influence of their literary forebears are the most self-evident. In his effusive blurb, W. N. Herbert finds echoes of Bunting, Stevenson, Pickard and MacSweeney but I strongly detect the voice of Andrew Waterhouse here too. So already, even before we’ve read the first poem, we’re into some pretty heavy stuff.

However, what could be ponderous and portentous about this collection simply isn’t to be found here. Morris-Campbell as a speaker, as an authorial voice, is affable and approachable. I like Morris-Campbell’s hybrid register, his poems are peppered equally with Geordie parlance as much as they are with more recondite terms, this itself is dramatized in the collection as the conflict between a working-class heritage and frame of mind and having access to higher education, a traditionally middle-class rite of passage. In ‘Post-Psycogeographic’ Morris-Campbell has a dig at the fashion for posh flaneurs to come up to a part of the country and claim it their own, as a sort of cultural colonialism:

Morris-Campbell is rightfully proud of the way he speaks and knows that no literary language will ever be able to recreate live speech, as we hear it on the streets, in the pubs. However, all good poets strike upon an idiolect that works for them. As someone Newcastle-born, Gateshead-raised and Northumberland-settled, I can particularly relate to the poem ‘Akenside Syndrome’ which is about the dilemma of how to speak, as your tongue can quickly incriminate you. To be a post-graduate educated Northerner is to occupy a strange liminal land, you will always be judged in well-spoken academic circles or high society as intellectually inferior because of the historical prejudice against Northern accents but you will also be judged at the native or vernacular end as a foreigner (see Tony Harrison’s masterly V for an example of this), that ‘taalkin’ posh’ means ‘collaborator, sneak, crawler, softy’:

The politics of these poems, and some are deeply polemical, drawing on the trauma inflicted by the Tories on the North East, are human, progressive and sympathetic. The speaker always sides with the underdog, which is an inveterate Northern trait, though Morris-Campbell hints at how some of the more aspirant working-class in the North were tempted to vote Tory on the hollow promise of a better life (see ‘Have You Heard the One About the Lions?’). Morris-Campbell is also to be praised for being attuned to the refugee experience and the tensions between immigrant peoples who deserve safety, security and a better life and the deceived white residents who have been whipped up into a tabloid rage about people ‘coming over here’. What these people fail to realise it that they are pawns, used by the political hegemony whom in turn use the immigrant narrative as a smoke screen to distract their voters away from the crimes that they themselves commit:

The poem then goes on the explain that Morris-Campbell’s university contracts are precarious and that this has forced him against his will into being a ‘scab’ for having to work to keep his job while those in the union strike. This is no doubt a dilemma to which many of his readers will be able to relate. One of my favourite political statements in this collection is how the speaker provides us with translations, or rather erratum slips, in the rhetoric used to describe the North East in ‘Errata Slip for a Northern Town’:

Being a Northerner, I am sensitive to things that I see as regional and parochial stereotypes, cultural signifiers that are used as a short-hand for some sort of Northern authenticity: stotties, rag n’ bone men, ‘geet big’, spuggies, haway the lads, fog on the Tyne, talk of pits and Davy lamps. However, I feel that Morris-Campbell escapes these cliches largely and poems on such themes, take ‘Davy’ for instance, are moving and original. An elegy for his ‘Great-Granda Nick’, the speaker takes his old miner’s lamp and lights it in the garage and is carried away, the poem coming out of the grim underworld of the mine:

I get sick of the way the North is misrepresented on television and in the media and I think Morris-Campbell must too. We are continually sold short as binge-drinking ground zero, the home of Gazza and his comedy breasts, bottles of dog and our gift to you is Greggs. This collection alone is testament to the enormous body of creative work of lasting importance that has been created in the North East. I admire how Morris-Campbell has made a virtue out of being from, and proud though not uncritical of, a specific place. It’s enviable how some poets can align themselves powerfully with place, and those such as myself, compulsive self-exiles who drift and wander are often not connected with any place at all. Corrigenda for Costafine Town does for South Shields what Robert Selby’s The Coming-Down Time (Shoestring Press, 2020) does for Suffolk, what Bunting’s work does for Wylam and Briggflatts, what Barry MacSweeney’s poetry does for Sparty Lea and what Andrew Waterhouse’s poems do for Lindisfarne. These places should be proud to have such celebrant poets as their native – or adopted – sons.

Much poetry we read follows the classical Orphean trope of katabasis, the voyage downwards or backwards, where the poet is beset or depressed by something and they go on a journey in search of answers or a solution and often come back changed. Morris-Campbell is uncompromisingly his own man and poet and his poetry is arguably instead an example of anabasis, a confident march onwards and upwards, he stays at the coast but voyages inland into the heart of the matter in every one of his poems.

On ‘Bloom’ by Sarah Westcott