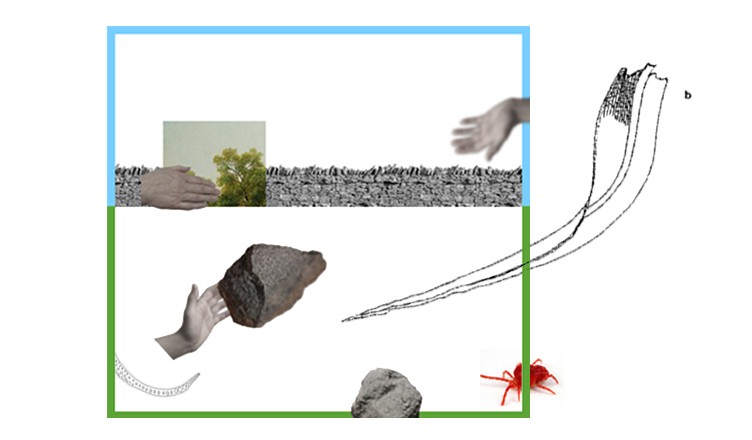 The Making of the English Landscape, W.G. Hoskins

For R.F. Langley the small details were the crucial ones. What he called the ‘bright particulars’ fuelled his own ‘imaginative game’. His is a world filled with specifics. Observations that combine to create landscapes.

In one of his last poems, ‘To a Nightingale’, Langley describes a moment where he stops ‘at nothing’:

The scene is something of a rural idyll. It has resonances of ‘Adlestrop’ and a similar sense of stillness in time. The feeling of summer heat, the tranquillity in which, for Edward Thomas, ‘No one left and no one came’; these same effects cause Langley to be ‘stopped at nothing, as I wait for this song to shoot’. However, with this sense of summer calmness the similarities end. Although Thomas has an appreciation for the natural world around him Langley shows himself to be the botanist whom Hoskins would want to play over this particular scene. It is not just mosses clinging to the dry stone walls, they are ‘Burls of Grimmia’; sitting on the ‘baked lichen’ are not non-descript flies but ‘Helina, Phaonia’; the colours of the moths which ‘flinch across the hedge’ are not just yellow but ‘lemon, I’ll say primrose-coloured’. It is important here that names are correct: Camptogramma and Scotopteryx are the moths in question for example – a far cry from Thomas’ loose groupings of ‘all the birds/Of Oxfordshire and Gloucestershire.’

Detail is not just confined to taxonomy and classification. There is great care in the structure of the poem too. Each line is composed of seven syllables: this is rhythmically appealing – as well as, I’m sure, a product of Langley’s own desire to set himself a formal challenge. When combined with subtle half-rhymes and well placed alliteration, the vignette we’re presented with is illuminated by the precision of observation and the exactitude of its construction. There is the sense here of Langley almost as a physical geographer of the form. One section in particular combines Langley as botanist, ornithologist, and formal creator:

The real quality in the make-up of this poem is not the sense of nostalgia and beauty in a quiet moment, but the particular placement of the reader inside that moment. The title of the poem gives a knowing nod to Keats of course, but there is no sense of distance between the reader and the scene as there is in that famous ode. What Langley does take however is an awareness of the importance of what Keats termed ‘negative capability’. Langley allows himself, and by proxy us as readers, to be receptive and immersed in the natural world, but not to expect anything more concrete from it. We are not given answers here. While it could be said that the poem verges on the sentimental it is brought back from the precipice by its very specificity – by the construction and veracity of its interrogation. Langley himself perhaps says it best in the final section of an earlier, softly meditative poem called ‘The Upshot’:

A landscape is not just about the creatures that inhabit it. In one of his early poems, ‘Matthew Glover’, Langley presents a mixture of fictional local history and character based internal monologue. The poem concerns what might well be the two main pillars of the English psyche – land ownership and self-doubt – and is set during the period of Parliamentary Enclosure that gathered pace between about 1750 and 1830. This move from the mediaeval Open Field System to Enclosure was a huge change in the way the landscape and geography of England in particular (though to different extents in different counties) was owned, worked and accessed. Enclosure meant common land became scarcer, to the detriment of the poor, but that landowners could make more profit and adopt more productive farming practices. It is in this period that the titular Matthew Glover, a ‘resident’, is trying to decide whether to support or oppose the enclosure of the land he has known all his life. The opening stanza invites us into the geography and gives us a sense of this place:

This landscape, this little centre of the world, is what Matthew Glover must decide if he wishes to lose. The focus switches between descriptions of the land and its environs:

to the uncertainty of Glover, and what he feels to be the right decision:

The uncertainty inherent in Glover’s attitude towards the landscape he inhabits is enhanced by the way Langley uses the structure of the poem. The broken nature of the lines and the hesitancy this creates are a crucial tool here (tool being very much the appropriate word). The indents and irregular spacing replicating the enclosure of the land; the bending of boundaries to suit human need. It evokes both the sadness and the sense of loss that the changing nature of the landscape and its usage will inevitably cause. There are more descriptions of this arable battleground throughout the poem, all as detailed as one might expect from Langley (still with those ‘bright particulars’) and the to-ing and fro-ing between these and the inner turmoil of Glover is captivating. There is a quote by the archaeologist Francis Pryor from his book The Making of the British Landscape (he’s slightly more inclusive than Hoskins) in which he asserts that ‘There are two landscapes. The first and most important is the physical landscape out there in the real world. The second, which can seem just as real, is the landscape of the mind.’. In ‘Matthew Glover’ Langley is acutely aware of this; the poem is a peculiarly poignant and very particular evocation of an imagined English landscape, given voice and physical shape through careful description and craft.

It could be argued that the purpose of history as a subject is not simply to give a narrative backdrop to important events, but rather it is to tell the stories and uncover the ways-of-life of people we can never meet. The story of the British Isles is a story of movement, migration, invasion and settlement. This is as true now as it was two-thousand years ago. Contrary to some current opinions, our “island nation” has long been a place of refuge – a home if you prefer – for migrants. Therefore, to try to comprehend the landscapes of Britain you must be prepared to hear and represent the displaced. To try to explore a landscape of voice.

In the poem ‘Saxon Landings’ Langley renders the frenzied stream of consciousness of a group of Romano-Britons as they are hurried and harried by invaders – the Saxons, Jutes and Angles, the latter being the very group that would eventually come to give England its name. Langley has said that the poem was ‘sparked’ by encountering an exhibition of the Mildenhall Great Dish, part of a hoard found in Suffolk in 1942. The narrative of the poem traces the spread of panic caused by impending invasion, through to the burying of personal or family items in the ground as a hoard. Whether those who buried hoards ever expected to return to claim them is something we can’t know, but the act of trusting their most treasured possessions to the earth itself is a crucial reminder of the connection between humans and their surroundings.

History is more than actions and objects though. As the Anglo-Saxons knew the history of a people is also oral, it is language. Langley knows this as well and the language of ‘Saxon Landings’ conveys not only the anxiety and confusion of a time but offers us something akin to a translation, not of a text but of a way of speaking. It begins:

You can feel the urgency here, the fear. The gabbling and garbling is symptomatic of a pouring out of urgent emotion. In addition, the strange syntax also suggests a language in development: odd phrases appear unexpectedly such as ‘the smells are sharp the bricks/don’t blink’ and ‘this is keepsake and darling/and silver in the moonlight is cold/twice cold’. It is almost as if the speakers are using words or phrases unfamiliar to them, or perhaps it is more that they are attempting to translate themselves into our modern English in an attempt to reach out to us. It is reminiscent of the broken speech of someone abroad struggling with an unfamiliar language. Desperately trying to be understood but unable to fully express what they wish to convey. The last section of the poem commences with the landing of the “invaders” and again, the unstoppable flow of speech:

The climax has us running with the dish – the artefact preserved, once it has been pushed ‘into the soft loam’:

This poem is a rush of emotion and, although presented in five parts, it is over all too quickly. With ‘Saxon Landings’ Langley has taken language and created a world from it; much like the invaders that haunt the edges of the poem would go on to take their language and use it to create a country.

Places matter to us, that much is clear. R.F. Langley’s poetry is expert at showing us why. The detail, the understanding of history, archaeology and language combine to create fascinating and moving poems. His Complete Poems (Carcanet, 2015) is a testament to his skill and imagination – it reveals a poet with a special ability to be both incredibly exact and wonderfully expansive. Francis Pryor also comments that landscapes are ‘essentially products of human efforts, combined with natural features of the terrain’ but they are also key to finding a way to express or project something of ourselves. Langley’s poetry is the epitome of human effort in combination with natural features. It feels like a landscape of its own. It is a landscape that speaks to the present, allowing us to engage with the world around us but, crucially, it does so through the echoes of a shared past.

Chris Larkin was born in Gravesend, Kent but currently lives in Essex. He hopes his home county will forgive him.

View all posts by Chris Larkin →