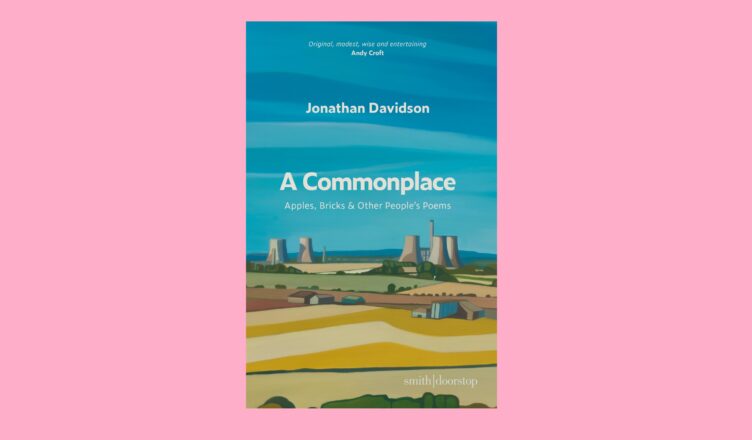 A sense of place abounds in Jonathan Davidson’s A Commonplace (Smith-Doorstep, 2020), and while that might seem natural from the title, the ‘place’ here derives from a translation of the Latin term ‘locus communis’ or ‘a general or common topic’. Commonplace books were collections of sayings, proverbs or quotations on a particular theme, popular during the nineteenth century, and representing private issues of concern wrapped up in the hope of finding a readership. A perfect vehicle for poetry, then. In keeping with the genre, A Commonplace comprises notes, footnotes, original poems by Davidson, and poems by – among others – Zaffar Kunial, Ann Atkinson, Kit Wright; it even has a gazetteer.

The focus on place is at the heart of a poem like ‘Leaving’, about transience and what it means to pack up a home. ‘I know I romanticise. I know nothing is immutable,’ Davidson writes, but it is that demand to place bricks or cultivate apples on the essentially mutable world that so intrigues him. Practical romantics end up finding themselves imagining the way things ought to run, and Davidson is no exception. A key poem in the collection is ‘Utopia’, although here the name of Sir Thomas More’s ideal community is ironized, or rather the fact of it being ironized is exposed to a kind of meta-irony, driven by a political anger about ruined walls, and terrible political agendas. The poem takes as its focus ‘…an old brick in an old wall along the Old / Main Line Canal a kilometre west of here’ which just happens to be engraved with the word ‘Utopia’.

If the plaintive tone seems a little basic, that’s the point. The breathless energy catches the reader up in the sudden realization that people in a wealthy nation are going hungry and homeless, and makes us ask why we aren’t doing something about it. Elsewhere, bricks become emblematic of class divisions:

A place, like a theme, is a construct, brought into being by perception and reflection, a sense of loyalty and ties, through the buildings that define a community, or even the absence of buildings that defined the place before people came along. Essential to our understanding of our sense of ‘place’ is that sense of when one location blurs into somewhere else, the subtle distinctions that operate at the very heart of our shared (and divided) sense of cultural identities. As Davidson offers regularly throughout the book, these distinctions, while imperceptible, become loaded with political points, like the righteous anger of looking at a ruined brick and wondering why it couldn’t have made a house. Sometimes those distinctions become magnified, of course, and Davidson is not shy about looking at the grander political issues. Take this, from ‘Borders’:

If it seems like I’m reaching towards current events, you’d be right. There’s an accidental topicality to some of the work in A Commonplace, because the book features poems set in and around Kyiv. ‘The roar of trains / Approaching is the turbulence of centuries’, Davidson writes at one point, a line that has been given a terrible relevance by the invasion of the Ukraine by Russia. I doubt Davidson would want to claim Kyiv as his own, but I found these poems moving and poignant, not least because (without making my own claim to the city) I visited Kyiv right before lockdown, and so it became the last I saw of the wider world until life retreated to a succession of familiar rooms. And that’s in keeping with the theme of A Commonplace, that we find ourselves caught up in emotional attachment to places almost by surprise, and that they come to define us. Take this, from ‘Metro’:

At the end, summing up the approach he’s taken with his commonplace book, Davidson declares: ‘I want poems to read me. And I want these poems to read you, to say what you might have said, or thought, to be of some use. I’m giving this commentary because I want you to know why a small cottage near Llangollen is important to me. Or why bricks are.’

Poems are undoubtedly wonderful things, but poetry itself can become a little stuffy, overheated, and insular. What this book offers is a tradition, not in a grand, Leavis-esque singular story of a culture, but the way that poems more naturally operate, in the private collection of influences and details. In its quiet, amusingly modest way, this book sets about making a great statement for the importance of poems in a life more than any self-consciously boisterous anthology or manifesto ever could. As Davidson writes in his end notes, ‘The sharing’s the thing.’ A Commonplace represents a life lived with verse at its centre, and as reminders of why poems work and why they are important, it is loyal and devoted and compelling, and, most importantly of all, persuasive. To remind you why you read: what more can you ask when you open a book?

Recordings of various poets – including Liz Berry, Gregory Leadbetter and Olga Dermott-Bond –  reading Jonathan Davidson’s poems from A Commonplace can be found here.