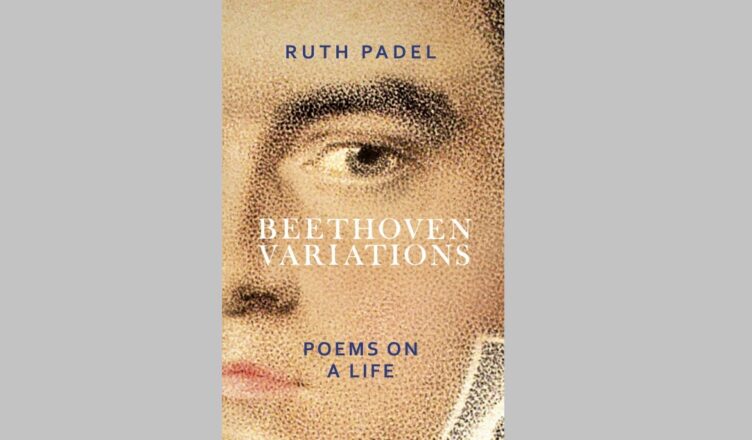 Some composers keep themselves out of their music, but in Beethoven the life is always peeping through. It seems natural, then, for Ruth Padel to have woven herself into her Beethoven Variations (Chatto & Windus, 2020). The book – elegantly designed, with a list of recommended works and various illustrations – has something in common with Darwin: a Life in Poems (Vintage, 2010). That was illuminated by marginalia: here, the biographical summary comes in a prose ‘Coda’. The reader might feel inclined to skip this (at over thirty pages it’s really more of a Grosse Fuge) but would miss much that is enlightening about both composer and poet.

Like Beethoven, Ruth Padel plays the viola (‘a writer’s instrument, inward and between’) and this is one of several personal details that give her observations a special authenticity. An introductory poem, ‘Listen’, at first keeps a tight focus on the subject of the ear-bone (it ‘lasts longest when we die’), but quickly draws back to establish the broader biographical/autobiographical aesthetic. We learn how Padel’s parents ‘got together at a music camp’ playing the Op.69 Cello Sonata, and she recalls her mother ‘practising trills from the Pastoral Symphony / where a clarinet alone / has to drop perfect sound into perfect silence’ (a later poem will describe how the poet’s own viola fell silent when its back came unstuck during the Pastoral, and in the Coda we’ll hear how the audience at its premiere ‘tittered at the birdcalls’).

Although the poem’s four movements edge it towards the symphonic, the variations are an effective device. They are essentially chronological, shaped by form as much as topic, ranging from the sparse, irregular free verse of ‘Birthplace’ to pentameter, full rhyme, formal stanzas. Images from the poet’s travels (‘We all bring our own baggage/to the city Beethoven raced back to’), encounters with memorabilia, and even Google (‘On my screen is the château / where Beethoven…’) are set beside straightforward narrative, moments of reverie (‘That’s how I imagine him…’), more abstract pieces and the occasional bagatelle. Sometimes Beethoven is addressed personally. Sometimes the poet walks into frame – at her first quartet concert, or remembering a companion who ‘showed me how to live a creating life’. Padel has a lively wit and wants to keep us all entertained: a knowing reference for aficionados, a factoid for newcomers. Just as Beethoven could risk the crazy, hilarious Variation XIII in his Op.35 without losing a sense of its overall structure and momentum, so she allows herself to shift boldly, say from the vision of Mozart as ‘a fat little bird. Bug eyes, fidgety’ to the death of the composer’s mother. This doesn’t always quite come off, when the style of a variation is outside her range, or when she forces the parallels between her own life and her subject’s, but generally she is guided by her musician’s instinct for pace and balance.

It seems right that this book should end on p.131, opus number of Beethoven’s greatest quartet, whose autograph manuscript is reproduced just before the dedication to the Endellions. This late quartet evidently matters as much to Ruth Padel as it did to Ted Hughes, who also wrote about it. But it’s Anne Stevenson’s ‘Arioso Dolente’ that comes to mind in Part III of ‘On Opening the Manuscript of Opus 131 in the Music Archive, Kraków’:

She ends by kissing the manuscript. Beethoven is the theme of these variations, but as with Elgar’s famous Enigma, there is another and larger theme at work too.