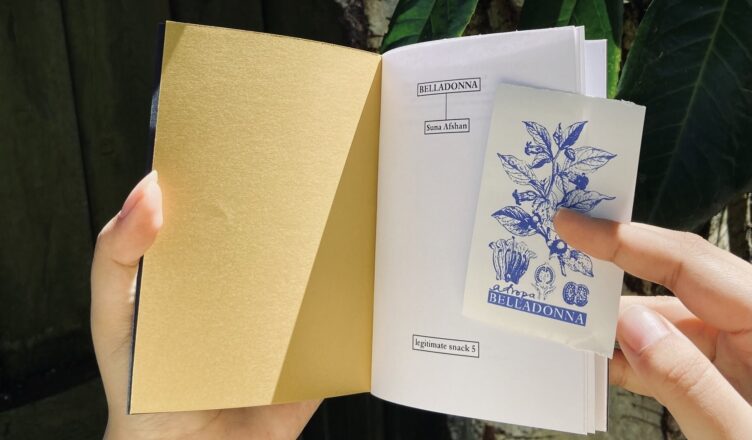 Both grounded and detached, playing with a sense of narrative but also revelling in the rarefied brightness of the image, Suna Afshan’s debut chapbook Belladonna, from Broken Sleep Books, is an experience notable for its intensity and a sense of writing that comes from beyond time.

A single poem in four parts, ‘Belladonna’ deals with the intensity of a female relationship on the cusp of adulthood, where innocence is quickly frayed and the (blood) rites of passage beckon towards experience. ‘Remember Belladonna’s saunter? Her sway/ Warped our innards like wax crayons in heat.’ The ancient and the contemporary rub against one another in dynamic contrast. ‘Ritualistic ablutions’ edge up against packets of prawn cocktail crisps, Milky Ways and Lucozade. If something about a long poem dealing with themes of religion, sexuality and decay sounds familiar, then the tone (and even line numbers) make clear that Afshan is tilting at Eliot. When poets approach high modernism, it can be as either cathedral or bus shelter: there for chilly reverence, or to be scrawled over with disdain. Afshan’s intentions are more nuanced here: by placing Eliot in the context of twenty-first century writing, she is self-consciously positioning the ceremonial next to the disposable, as though inviting us to an auto-da-fe at Villa Park.

For all the thematic echoes of Eliot, the tone of the writing is more reminiscent of the near-modernists of the mid-twentieth century. The references to Catholic guilt (‘We sat bleary-eyed with our rosaries, asking / God on those luckless dawns for humble mercies’) put this reader in mind of the Confessionals: Plath for the intensity of female longing, Roethke for the way the work revels in the vegetal, Berryman for the syntax, maybe even Bishop for the guilt of sexuality. Still, these influences (if they are influences) are worn freely, and the key difference between the Confessionals and the work Afshan is offering here is the use of the ‘I’. Berryman, for example, often spoke of his ‘strong disagreement’ with Eliot’s line about the impersonality of poetry, stating: ‘It seems to me on the contrary that poetry comes out of personality.’ Afshan’s ‘I’ drives the poem (‘And I—free, free, free, and quite dead/ Wept at his feet, begged to be written’) but the dramatic presence flickers like a spinning coin throughout, and for all the intimacy involved with its depiction, the narrator remains an often-invoked, but elusive organising presence.

At various points in ‘Belladonna’, I was reminded of the work of Michael Haslam. Compare the opening to Haslam’s ‘Spriggan’s Fair’ (‘Up to a shriek and yielding, the excess gave let/ To bleating at the throat. The field was rank) to the end of the second poem in Afshan’s sequence, ‘Twilight Sleep’:

A spriggan is a woodland fairy, and Haslam’s work concerns itself with trying to give currency to folk mythology in the mode of late modernism. The relationship between religion and the organisation of myth influenced Eliot, too, specifically as the symbolism of ‘The Wasteland’ drew heavily on Jessie L. Weston’s study on the Grail legend, From Ritual To Romance. Afshan reclaims this element of discourse in the poetic tradition, repurposing the capacity for myth and ritual to for contemporary themes.

Very few people write like this at the moment, and reading ‘Belladonna’, I was left wondering why. Maybe we’ve all been reading Frank O’Hara, when we should have been learning from Jack Spicer; maybe we’ve been caught up in a succession of (sub)urban poses, when, really, we should be thinking about poetry’s ability to evoke the ritualistic. It struck me how overfamiliar a lot of voices in contemporary poetry really are: striving for a presumptuous intimacy, always ready to offer whinges and conquests, like some endless heart-to-heart in a pub. It’s enough to make you knock back your drink and leave. Afshan’s voice is self-consciously more ceremonial. ‘From Tuesday I pinch a handful of earth / And I flee back through time,’ she declares at one point, and strangely, with her gaze posed backwards, Afshan ends up offering something fresh and direct: new blood for old ceremonies. Compelling and sinuous, displaying poetry of the root and the gut, Belladonna is a debut pamphlet to savour.