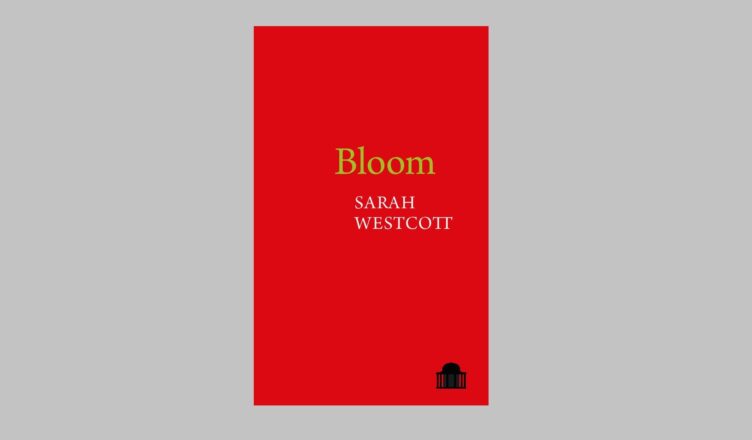 The poems in this luminous book, Bloom (Pavilion Press, 2021) are tight, fragmented things, varying in shape and typesetting, in a style both abstract and committed: the world placed firmly underfoot even as the work revels in strangeness and uncertainty. The first poem, ‘Apples’, strains at the edges of form, and the spare lines of the opening (‘Have you looked, / Have you looked deeply’) give way to prose vignettes on this question about the power of observation. ‘I look into the eyes of a dog and it is a violent act,’ Westcott writes later. ‘The dog eye is a landscape I cannot reach and the dog is running here. Language: a barrier, a raft of sticks, a child with a nest in his hands.’ This becomes a key theme of the collection: the power of the imagination in what we see, and how we create as much as we understand.

As with Westcott’s previous book from Pavilion Press, Slant Light (2016), the natural world dominates the choice of theme. The short poem ‘Bud’, with its note-like quality, balances form and content: a small structure bursting with potential. ‘Tapered, some economy./ Between the twists an opening,/ promise of a line.’ This ‘line’ covers not only the basic unit of poetry but also drawing, and encapsulates the combination of the written and the visual at the heart of poetry. Westcott’s observations on nature and its relationship to the self emphasise clarity and detail, but there’s also a sense of ecstasy to the writing that elevates the work to an almost hallucinatory level. She has the ability to take a Blakean sense of wonder, and recharge it into something common and human and identifiable, rather than labouring a kind of lazy visionary excess. Take the tenderness of ‘Mid-life’, with its subtle, aching consideration of mortality:

The approach is exemplified in the long piece ‘Spring Fragments’. I may as well state openly that I adore poems like this for their movement between prose and poetry, the linear and the crystalline, where the poem can be whatever it wants to be without the anxiety of what constitutes poetry. (It’s the kind of thing you might see in Auden’s ‘Journal of an Airman’, or Charles Olson’s ‘The Kingfishers’; probably the mode originates in ‘The Wasteland’ and the influence of cinema on modernist writing). ‘Spring Fragments’ offers itself as at the crux between where a writer’s journal becomes a notebook, where notes to the self are transmuted into an offering to the reader:

Under the cross are dog violets in various stages of growth I take three to study at home. I put my glasses on – there is a pale, striped opening in the middle lower petal, the stripes like veins in the back of the throat…

The picture of the poet at her desk, examining the dog violets, lends an element of natural science to the act of poetic observation. Westcott makes reference to Gilbert White in the notes at the end of the collection, and the figure of the patient amateur scientist as exemplified by White serves as an avatar for the poetic work, a sense of one restlessly intrigued by the natural world. The balance of the scientific and the epiphanic also brings to mind the work of the American poet A.R. Ammons. Like John Ashbery, another poet lionised by Harold Bloom, Ammons’s reputation has suffered a little since his death, although for his restless search for the self in nature (and vice versa) Ammons seems as relevant now as he did when alive. With her search for the luminous detail in the natural world, Westcott covers similar themes, but with a softer, more personal voice: looking for the elements of the nature in tender moments of familial life. There are shades of one of Ammons’s more famous poems, ‘Reflective’ (‘I found a/ weed/ that had a/ mirror in it…) in ‘Pool’:

The blend of science and nature are at the fore of the prose poem, ‘The Walled Garden’. ‘A walled garden is a closed ecosystem in which all operations are controlled by the ecosystems operator’ the poem begins, but the register – technical, functional, circular in its logic, even academic – is at odds with the tone of a typical Westcott poem, who, you feel, is about as likely to write about ‘operations’ as she is about ‘parataxis’. The vocabulary enforces the artificiality of walling in the natural world, and with its balance of order and disorder, of structure and the chaotic, the poem traces a similar theme to Stevens’s ‘Anecdote of the Jar’.

Poetry often seems to create odd distinctions for itself, maybe in a flattering effort to be relevant, when really it needs no such contrivances. Eco-poetry is one of the more recent examples of this phenomena. It’s tempting to wonder what separates the self-professed eco-poets, from someone as quietly committed to the natural world as Westcott. Ecology is defined as ‘the branch of biology that deals with the relations of organisms to one another and to their physical surroundings’. You’d argue that poetry has been pre-occupied with things like that as long as there has been poetry, from Virgil’s Georgics, through Wang Wei, Basho, Wordsworth, Hopkins, Stevens… I mean, I could go on. There’s something original about Westcott’s nature writing, something unsettling, where clarity of observation is never far from an obsessive sense of derangement. Maybe that’s because hallucination and actually seeing are closer to one another than we might think: our interiors influence our perception of the exterior. Towards the end of ‘Apples’, Westcott declares, ‘I used to try and make things move by the power of thought. Stare at them, my thoughts a split beam. I could not make the apple roll. / Can you see it rolling?’

We can, of course. The world is always rolling in this collection, brought to life by Westcott’s quick but careful observations: in flux and subjected to harmonious processes, always in bloom.