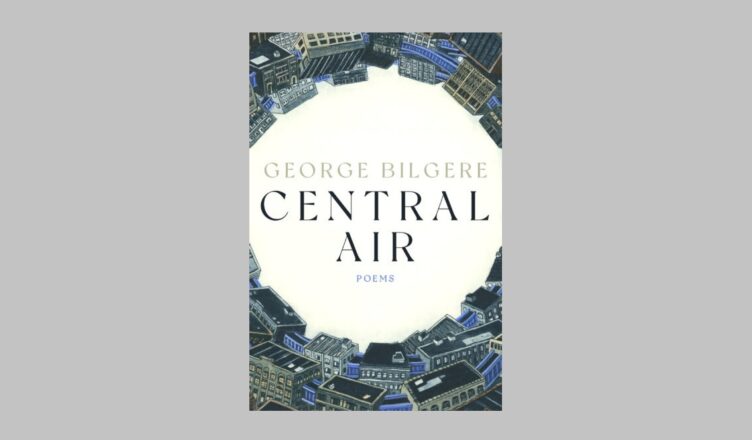 In America, George Bilgere is widely published and revered, winner of a Pushcart Prize and a regular in many of the best journals. How his work has not managed to cross the Atlantic is a mystery, given the fact that his themes and concerns are universal, his poetry sings with clarity.

Bilgere’s eighth collection, Central Air (University of Pittsburgh Press, 2022), makes use of contemporary touchstones to explore enduring ideas. There is nothing flashy or clever-clever about Bilgere’s work, though there is little doubt he could do all the bells and whistles if he chose to. Adrian Mitchell said: “Most people ignore most poetry because most poetry ignores most people.” Too often I think that line is true – but not in Bilgere’s case. His writing rewards on first reading, such is its accessibility, and continues to reward; its straightforwardness is really a sleight of hand.

‘Reichstag’ is a poem that serves as an example of Bilgere’s ‘now you see it’ skill. The speaker of the poem and his son are outside the building “which is burning / and coalescing with rich and complicated / history”, except the small boy is “not even looking at the damn thing”. Instead, he is taken in by the sight of an insect, a firebug. The speaker considers how his son’s interest in such things will soon pass:

By the end of the poem the insect is inscribed with “ancient and inscrutable hieroglyphics”, and the Reichstag is “some old building”. In the course of the poem time has collapsed, language and its means of veneration have been switched, and the speaker of the poem is drawing our attention to the question of what really matters – now, or the past?

The persona adopted in many of these poems speaks to us in conversational tones, draws us in, and we often find ourselves agreeing with the uncomfortable truths they draw our attention to. We may like to think we have great insight, that we are sophisticated and sensitive, but Bilgere knows that beneath all is the selfish gene; pragmatism is so often the real engine. In ‘Bee’ he pays homage to the beekeeper “priestly in his vestments”, recognises the work and wonder of the creature itself among the “hollyhocks and honeysuckle”– before “I brush him to the sidewalk / with the leaves and butts”. What else can he do? Life gets in the way of the poetic, as it does in ‘Surveilled’ where, with great bathos, ruminations on “a new kind of loneliness” are interrupted, “but here’s my car”.

Bathos is certainly a hallmark of this collection, as it is of all his previous ones, humour too. However, there is also a sense of alienation that touches the speaker, this Everyman/Regular Joe. The passage of time repeatedly crops up in the poems, to grotesque and comic effect in ‘No Problem’:

And in more subtle ways, too, such as when the teacher realises that tastes and fashions have changed, the diktats of woke thinking have taken hold, and he can no longer expect students to react in the same way to a poem as he might. In this case Jack Gilbert’s poem ‘In Umbria’ elicits the following response from a student: “Wow that guy seems like kind of a perv.” Bilgere accepts he must put the poem aside for good:

Of course even here, the language is pinpoint – the juxtaposition of the student voice and the mock heroic creates its own humour and serves to emphasise the disjunction.

The world is changing, and Bilgere is conscious that the changes are bigger than his own story. In ‘Morning, Berlin’ the waitress who speaks in “bad German” has arrived or, escaped, from Kabul, while in ‘For the Slip ‘n Slide’ – his hymn to childhood innocence, summers spent playing with black children from a neighbouring family – Bilgere suggests America is “a country growing stranger / less recognizable, more lonely every day”. The foreboding is present in ‘Stolpersteine’ when, standing in Berlin and reflecting on the rise of fascism, Bilgere describes how “back home the language is heating up / the elected leader is shouting to the crowds … giving voice to something locked up in them so long”.

Indeed, for all the lightness of touch and the nods of joyful recognition that the poems provide for the reader, there are some heavyweight poems. ‘Misasa Bridge’ uses a hauntingly naïve narrative voice to devastating effect, producing an entirely original portrayal of Hiroshima. Meanwhile, Bilgere’s poem ‘Chernobyl’ has, sadly, taken on an extra dimension as one reads it in 2022. When written, the poem was commemorating the nuclear leak, examining a place frozen in time:

Now the poem is painful in its unwitting irony:

Proof indeed that the world is a complicated place, that life comes at you fast. For Bilgere, the complexity comes in all kinds of ways, from trying to cope with one’s own sense of mortality or – as in ‘Mars’ – it might be wrestling with the question of “who the hell/ would actually pay for, much less drink, / a Coors Light?” In the closing poem of the collection, ‘Ripeness’, Bilgere takes stock and acknowledges his good fortune:

The title poem describes a couple who are removed from the world around them, almost hermetically sealed in their air-conditioned home:

A nice life for some, but not Bilgere who wants to remain in the world, exposed to the potential for “ecstasies beyond our dreams”. It is this passion for life and the way these poems embrace life’s complexities that ensure Central Air ignores nobody and should be enjoyed widely.

Neil Elder’s The Space Between Us was published by Cinnamon Press in 2018, having won their debut collection prize. His pamphlet Codes of Conduct was shortlisted for a Saboteur Award. Other works include And The House Watches On and Being Present. His latest work, Like This, was published by 4Word Press. Neil lives in Harrow, London.

View all posts by Neil Elder →