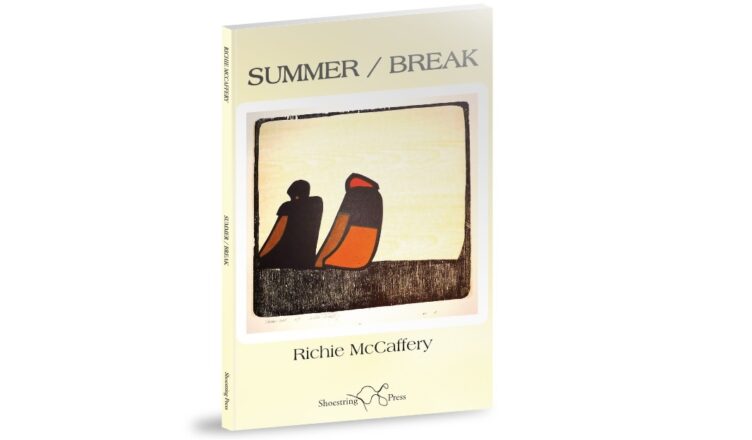 Richie McCaffery’s third collection, Summer/Break (Shoestring, 2022), is one of quiet peril. Everywhere one looks there is a quest, however forlorn, for salvation, a desperation and sense of shipwreck, belied by – or at least running counter to – the poet’s formal and syntactical control. In apparently calm, usually conversational tones, calamity is given a pinpoint accuracy using a blend of surprising analogies, domestic setting and a loaded use of the present tense. In ‘Bearings’, McCaffery’s penchant for a subtle kind of metaphysics is on display, too; his poems often open up with a recognisable gambit only to perform a sleight of hand; misdirection as refreshment of scene, but also deepening of thought. The poem is short enough to quote in full:

Three sentences, nothing rising much above a spoken tone, and yet the easily-missed sophistication reveals itself over time. The depth-charge of ‘much more curious’ in the opening line, deflating, not necessarily reliable; the suggestive choice of words in ‘drilled into my head’, suggestive as it is of medical intervention, lobotomy, interference; the grounding of ‘even though my location is clear’, undercutting the apparent confusion, refocusing the definition of lost; that final ‘flourish’ of a two-line statement of fact, its ongoingness, its blurring of the sense of what ‘being found’ might mean in this new context, its slight ambiguity of sense with that final line as its own unit, ‘being found for real’ also carrying a sense of being found as real, assertion as well as plea.

This sense of needing, or at least awaiting, rescue is one of the driving forces in the collection – more often than not there is no one there to save anyone else, comparisons reach for the desperate, the disastrous – ambulance sirens, tempests, post-mortems. If the present tense does a fair bit of heavy lifting there is, equally, something going on with the past – there’s a drive towards restoration, preservation and recovery. It’s there in one of the early poems in the book, ‘Sankofa Bird’, a bird from myth who can “migrate way back in time/and fix a snag or nick in our past,//bring back a budding twig/from a tree felled and regretted”; it’s also there in ‘Blawearie’, its direct address reminiscent of Thomas Hardy’s, or Ian Hamilton’s, equally conflicted (lost) love poems:

What the narrator wants to preserve, or rescue, is as telling as the desire to do so, as in one of the collection’s other stand-out moments, ‘Circadian Rhythms’, a portrait of the pleasures of a settled life which refuses to overstate its simple pleasures, and is all the more moving for it – “The cat sat on each of our laps. We went/to bed together, both asleep within minutes./It was one of the best days of my life.”

The rupture created by a break-up, the loss of the narrator’s ‘anchor’, can be expressed in lacerating moments of black humour –

– but equally in more poignant, bruised language, “we barely notice a fallow deer stag, grazing on nettles beside us…We never married, I never was the stag”. There is also a sense of the poet turning the gun on himself, as it were, which feeds into the sense of a drive towards repair, or restoration.

A sense of, again to lean on Hamilton’s poems, “young men who have come to nothing” is here: in encounters with a former teacher “the once bright/meeting him dulled” and, in the brilliantly cutting ‘The Fork’, as much about “what/I’d not become after showing such ‘promise’” as it is fate, and its unlikely convulsions. The Georgians who made a deer-antler handled fork “never expected it would end up/here in my hand” and there comes a droll, almost throwaway twist of the knife (or fork): “Before them, it was the deer”.

McCaffery’s gift for making plain, and concrete, existential questions and knotty, complicated feelings shows far more than promise, and his adroit but self-effacing prosody allows his undemonstrative diagnosis of the “greater schemes at play” to resound long after the rushing sirens have faded from the ear.

Declan Ryan was born in Mayo, Ireland and lives in London. He has published two poetry pamphlets, Faber New Poets 12 (2014) and Fighters, Losers (2019). His first collection, Crisis Actor, is forthcoming from Faber & Faber in 2023. His reviews and essays have appeared in journals including New York Review of Books, The Baffler, Times Literary Supplement, The Guardian, The Observer, Poetry, Los Angeles Review of Books and New Statesman.