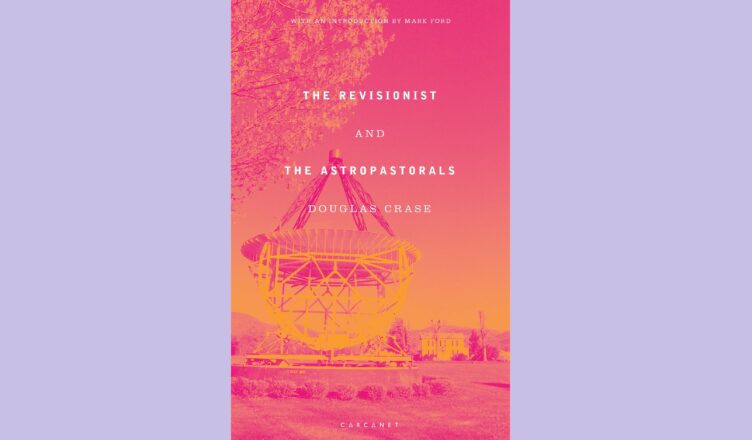 “A shipwreck becomes a way of seeing things”, Douglas Crase writes in ‘Saggaponnack’, and a sense of the dredging up of what’s been lost occurs throughout his own, ‘recovered’, work. Crase’s first collection, The Revisionist, was published in 1981, and greeted with the sort of notices Emerson once termed a “mush of concession”, as Mark Ford’s introduction to this new Carcanet edition of Crase’s poems explains. His ticker tape parade was thrown, however, by some of the hardest-to-please critics of the time. Harold Bloom, Anthony Hecht and James Merrill were among those tripping over each other in print to praise Crase’s bringing over of the Whitmanian legacy, in “distinct and identifiable idioms”, into the unpromising ’80s. There followed a silence, in print at least: leaving aside a commonplace book in the mid-’90s, and a study of two botanists, it remained unbroken until 2017, when a pamphlet, The Astropastorals, appeared alongside a collection of essays.

Both debut and pamphlet appear here in full, and one is immediately grateful for Ford, and Carcanet’s, rescuing of Crase from the what-ever-happened-to realms. The opening, title poem, ‘The Revisionist’ is in eight parts and a convincing, clause-heavy diction, thinking its way through difficult things elegantly. It’s an essay on the accident of history, full of concrete images; philosophy felt on the pulse, measured out in the thrashers of Prospect Park. Crase noted his use of what he called ‘civil meter’, one which makes use of “the variable patterns of the language of American power”, and both America and power are fundamental to this poem, and his work as a whole. The ‘I’ is recognisably in that Whitman line, just as each ‘you’ is so often greater than any single self – Ashbery, another early Crase adopter, talked of his ability to look at landscape with the “disabused eye of a lover” and there is something in the early poems, especially, in which Crase uses tropes of intimacy to sing of America. Figured, wittily, as “a vengeful Johnny Appleseed” in the title poem, Crase’s lens has a wide focus, and a few recurring obsessions emerge across the grand panoramas of his debut.

History for Crase is at once ongoing and physical, “the world/We could have created” is only ever “a degree or two away”, and the idea of revision becomes something urgent, ongoing and civilising. “Nothing is ever over in a place like this”, he writes in ‘Genesee Falls’ and this ‘place’ turns out to be at once specific and universal, both the familiar upstate New York terrain which he often returns to in vivid, colourful portraits and a lost, irrecoverable, always impossible Eden. The title poem ends on a note of hopeful amendment: “Although the past/Seems to be level in its place there’s room for more/And the ragged additions polish the previous days”.

Part of Crase’s loving update of transcendentalist, multitudinous, vision into his own time is to fit it out for a period of erosion, commerce and reckoning, where the ones left living are “the sufficient remainder”. Colonising and the notion of innocence, in both its prelapsarian and legal senses, are two other of Crase’s preoccupations, “growing up is like being a colonist”, ‘In Defense of Ellis Hollow Creek’ notes, “Far from innocence, what’s left untended/Is what took years of living in one spot to learn”. Meanwhile in ‘Experience and What To Make of It’, set out partly in the language of a scientific paper (“Abstract”… “Statement of the problem”) it’s made clear that virgin ground, of any sort, is not to be found, even in the New World: “Significance was discovered in all cases/To have attached itself with pathogenic consequences/By the time of second experience.”

With this in mind, it’s perhaps less surprising that The Astropastorals saw Crase turn his gaze away from Earth and to the skies, with the idea of pilgrims and uncharted territory still firmly in mind. His dense, thoughtful prosody largely remains, although given an extra degree of peril by the thought that we are “an expensive mix/Of life-based chemistry perpetually on the verge/Of going to heaven in a vapor” or, more pithily forlorn, “Up slip creek in the dark”. For Crase, heaven is territory rather than faith, and unlike those in his visionary genealogy his is a “godless distance”, seemingly ripe for exploration. “[A]s far as you touch/Other worlds, that much you save yours”, he writes in the airier ‘Dog Star Sale’, aware of the parallels between his nation’s foundation myth and legacy of ‘discovery’. There’s a dark irony to the seeming idyll in ‘Theme Park’, its “clean getaway” resolving in a loaded vista ripe for some of that necessary revision: “Who could be sure of a tenure except in this world,/Fair between the river and the sea? – where the birds/And the natives, so enthused by our coming,/ Run back and forth like children on the shore.”

Declan Ryan was born in County Mayo, Ireland, and has lived mainly in London. His first pamphlet was published in the Faber New Poets series in 2014 and his second, 'Fighters, Losers', was published by New Walk Editions in 2019 and shortlisted for the Michael Marks Awards. His work has appeared in Poetry Review, Poetry London, Poetry (US), Poetry Ireland and the New Statesman, among others.