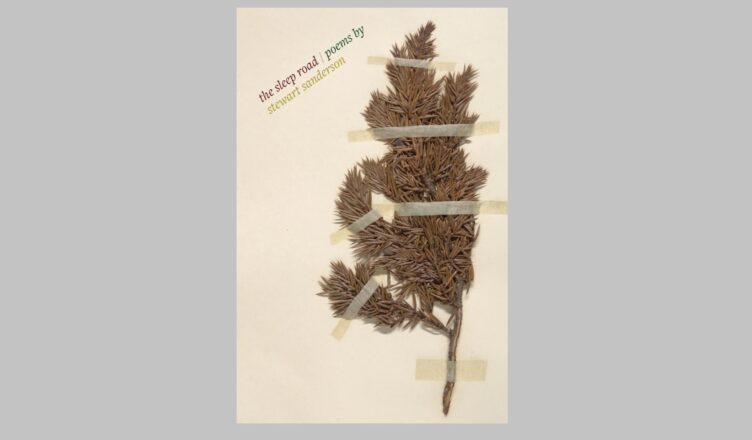 In his first full collection, The Sleep Road (Tapsalterie, 2022), Stewart Sanderson addresses several issues that are currently popular among many poets of his generation: the relationship between the human and natural worlds, the role that history plays in understanding the present, and an examination of national identity.

Nevertheless, in this book’s finest poems, Sanderson’s unfashionable and unusual aesthetic approach differentiates his work from the vast majority of his contemporaries, and means his poems explore these well-trodden themes in refreshing ways. By means of illustration, here’s the opening quatrain to ‘Dunadd’:

These lines play on the counterpoint between the rock and the foot, lending the former human qualities, reaching back into prehistory by placing the protagonist’s modern walking boot in a petrosomatoglyph (the renowned footprint at Dunadd), packed with connotations of the Iron Age and of the ancient kingdom of Dál Riata, all in the implicit context of present-day borders and nationalities.

This is intelligently and coherently executed, but the core of Sanderson’s idiosyncrasy lies in the afore-mentioned aesthetics of his exposition. For a start, the lines are all octosyllabic, finished off with abab half-rhymes and accompanied by delicate internal aural patterning. Furthermore, the poem offers us a simple, clear-cut sentence structure without any insecure need for fireworks or to tie the reader up in knots, everything expressed in words of less than three syllables. Very few poets of Sanderson’s generation would have enough security in their own control of language to achieve such simplicity, nor would they be brave enough to attempt to do so.

What’s more, Sanderson’s use of half-rhyme is also daring in a similar way. Many other poets of his age would eschew its use, fearing accusations of facile sound effects. Of course, in Sanderson’s case, the opposite is true, as it only serves to enrich the cadences of his language, never intrusive, never forcing him into artificial lexical choices.

And if ‘Dunadd’ feels like a significant poem in this collection, so does ‘The Thistle Bird’, which has wisely been chosen to precede it in the manuscript’s running order, thus encouraging useful parallels. Again, its first four lines are worth quoting:

Just as in ‘Dunadd’, the link between the human and natural world is pivotal to this poem alongside the question of national identity via the invocation of the thistle, topped off by a connection to the Baltic states (alongside the Urals and Scandinavia, they provide a socio-geographical point of reference throughout The Sleep Road).

However, once more, ‘The Thistle Bird’ is transformed by Sanderson’s aesthetic approach to his subject matter. First off, all these quoted lines are written in iambic pentameter, with all the literary baggage its use might entail. Nevertheless, they’re written with such skill that their metre is almost imperceptible, the syntax adopting a natural flow.

And then, beyond Sanderson’s end-rhymes, there’s that same aural patterning on display, demonstrated by his invocation of fear/frightening, poem/only, as/as/can/landing/Estonian, softly/need, frightening/landing. These sound effects not only provide us with a gorgeous cadence, but they also interlink words and overlap their ripples like a song that’s performed A Cappella.

And one final point about ‘The Thistle Bird’. It shows us Sanderson’s bravery again via his declaration of intent in the first line, via his mention of the poem itself. Again, this technique is risky and could end up seeming self-reverential or even narcissistic, but his natural use of language soon eases these concerns. This isn’t a poem about poetry or about the act of writing as such. Instead, it homes in on language as an expression of the bugbear of identity, ending with a stand-alone couplet that slightly hints at the irony of writing this poem in English, at the reaching out for other means of exploration:

These poems are examples of a developed personal approach to writing. In The Sleep Road, Stewart Sanderson’s use of form shows us he has the courage to go against trends, while he also understands that linguistic risk-taking and consequent achievement often emanate from simplicity rather than flashiness for its own sake.

His emergence, along with the deserved plaudits that his work has received, offers a positive sign that different poetic aesthetics can co-exist on the contemporary scene. What’s more, there’s an overarching feeling that Sanderson’s method will only grow in its capacity to move the reader over the coming years. Both in individual and in collective terms, The Sleep Road is a significant collection.