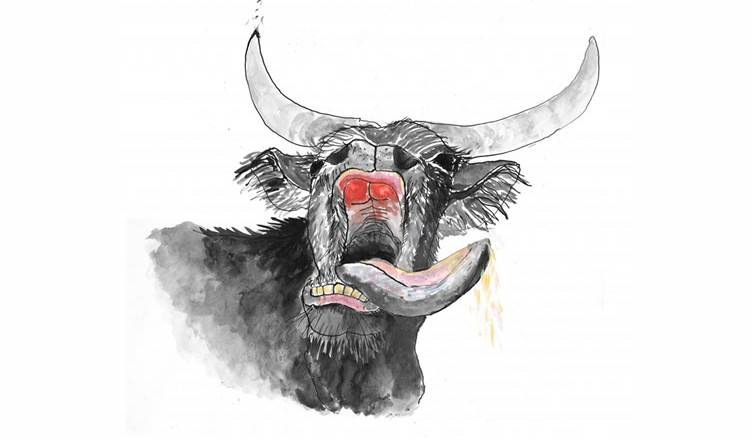 Which is more complicated, life or poetry? Whatever the case, they are seldom complicated in the same way. Yet Toby Martinez de las Rivas has that rare thing, an ability to fuse verbal and lived experience in complex detail. This offers a sort of succour – if things can’t be solved, they can at least be linguistic. Where it is quietly accepting, it’s a language of pied beauty; where it isn’t, one of baroque grandeur and jagged intricacy. Yet, for all its accommodating variousness, his poetry is neither incidental nor hotch-potch. It may be lofty, opaque or eclectic, but there is purpose and bombastic personality to its oddity.

To say that Toby Martinez de las Rivas takes on poetic tradition is an understatement. He has grabbed it by the horns and wrestles with beasts diverse as John Donne and W.H. Auden. Perhaps his most obvious distinction is the way he combines inherited influences with a contemporary voice. In places, he is reverential and exacting, elsewhere iconoclastic or frivolous and everywhere nothing if not mercurial. His first collection, Terror, is a vivid dramatisation of conflict, doubt and pleasure as encountered in life and literature – one that, despite its theatricality, reveals a moving commitment to realism.

Following its publication, much has been made of his affinity with Geoffrey Hill and, sure, they have enough in common to endure a purgatory of comparison – the asserted gravity, rabid self-interrogation, Latinate vocabulary, prolific referencing, emphatic scholarliness, black humour and slapstick wordplay, inter alia. But the crucial difference is this: Hill is a purist, de las Rivas is postmodern. By which I mean that in his poetry unity of vision is shattered. Consequently, the language that reflects that vision is animated by violence, disillusion and a desperate will to see aright, however cynically and brokenly framed. In this context, as in some ur-chaos, there’s also a terrific freedom to make something new, which is precisely what TMDLR does.

Hill’s manifesto, ‘Poetry as Menace and Atonement’, describes poetic success as a kind of ‘at-one-ment’. The pun is deeply intended. Here expression is both a means of discourse and of penance, and so effects total union of individual, society, culture and god (with language-as-glue). The pun doesn’t work for TMDLR, his would be ‘Poetry as Menace and At-many-ment’ (with language as hyphen-smashing hammer). The difference between them is significant, partway explained by a difference of faith. Hill believes in the mot juste, and indeed a divine arbiter; it is harder to locate TMDLR’s spiritual standpoint. In the opening ‘prayer’ of his collection he dubs himself a ‘false lapwing’. The first person is frequently interchanged with cameo literary personae in his work and where it isn’t, mixed with jokes and deceptions; conventional lettering often interspersed with offset text in miniature italic font that reads like a whispered aside, stage direction or musical dynamic. It’s therefore unsurprising that his presentation of religion is variable, a force for both meaning and nonsense as in, say, the hyperimaginative universe of Latin America’s magical realists.

Such exquisitely unhinged catholic imagery dominates the final section of Terror, in poems set on Spanish squares where nature appears hallucinogenically crisp amid clouds, doubts and dictators that loom grim and ambiguous. One feels a person grappling with what can and can’t be grasped. There is the same vividly realised struggle in the collection’s opening poem, ‘Twenty One Prayers for Weak or Fabulous Things’. The language here is in many ways religious. The verse takes the form of a sequence of prayers, the syntax is biblical, the diction often liturgical. But all has run wild. The poem begins

There is a strong literary tradition of loaded meteorology, the bible is a lexicon of fatally heavy weather, but of all the possible elements to come down, snow is a bit of a blank. And it comes unloosed, with the repetition of ‘falls… falls & falls’ sounding ‘beyond all’ control (and what are those bizarre ampersands up to?). The poetic voice has an unsettling certainty as it proceeds to describe confused situations. The whiteness here could be the colour of virgin beginnings or else death, vacuity, even madness. The stanza ends in a state of contradiction, with the paradox,

It’s a picture of darkness and light, a metaphoric blur of hope and despair.

Throughout the poem creatures appear from Christian, folk and mythical literature: parasites, drunk fishermen, Venuses. There’s the ghost of T.S. Eliot in these disparate resurrections, and indeed the legacy of The Waste Land haunts much of the collection. But TMDLR doesn’t share Eliot’s self-effacing ambition, the individual talent is riotously on show rather than wilfully extinct. Line by line, his style is less honed, more exuberant and shamelessly (and shamefully) elaborate. I mean, the word ‘albumen’ for egg-white! Yet the grounding omnipresence of tradition prevents him from disappearing into stylistic eccentricity, philosophical oblivion.

His natural world is as sharply painted and as rich with conceit as a metaphysical poet’s, rhythmically, there’s the spring and lushness of Gerard Manley Hopkins or Dylan Thomas in some of these lines:

He can wax lyrical, but is equally capable of bringing himself up short:

This last sentence is as sweet and terse as any line by Emily Dickinson. A later poem riffs off Christina Rossetti’s Monna Innominata. Overall, this range is surprising, especially in a culture that favours categorically entrenched poetry – Oxford Elegists, New Formalists etc. TMDLR couldn’t be further from any such camps. He incorporates formal archaic rhythms with modernist snatches, and alternates between tragic statement and those plaintive strains more common among the likes of Dickinson and Rossetti. And to all of these he adds his own voice, brazen, charismatic and off-kilter as it is.

TMDLR strikes a singular position among his peers. His pitch is especially unique, with a balance of weight and whimsy that is initially bewildering. He can be as nonchalantly surreal as Jack Underwood, he with the heart like a hole for a shoe lace, or as raw and unembarrassed as Sharon Olds. The twelfth stanza of ‘Twenty One Prayers…’ ends

It calls to mind the poem, ‘The Connoisseuse of Slugs’, where Olds compares seeing an erection as an adult to watching slugs emerge from foliage as a child:

It isn’t just a coincidence of conceit, the fundamental similarity is the unsqueamishly visceral delivery. TMDLR is less accessible, more weirdly melodic than her, hear the sweaty assonance of his ‘Harp of dusk, & muscle’; but a reason I compare the two, such different poets, is because I think there’s more humour and humanity in Toby Martinez de las Rivas than his intellectual virtuosity would first lead you to believe. There’s a roundness of personality here that distinguishes him from more strictly cerebral poets such as Geoffrey Hill and Jorie Graham

You get the ostentatious swagger of a youthful genius along with the empathy and humility of an older, more conventional writer. Take the following line from ‘Crede’:

Self-mocking yet sincere, it’s a ridiculously mannered confession of cowardice, brought off through provokingly mimsy imagery.

Like many of his poems, ‘Twenty One Prayers for Weak or Fabulous Things’ is populated as much by figures from history and literature as it is by his friends and lovers. His care for their troubles is genuinely touching but also potentially random, exclusive or mawkish. It’s risky but it cuts through generic sentiment, hollow cliché or intellectual abstraction to home in on something or someone specific. This calls to mind radically prosaic poets such as Sam Willetts and Robin Robertson. All make a bold pitch for the particular over the canonical. TMDLR sort of wants both and the characters of his poetry, our ambivalence towards them, stage the problem. Who are these people? Do we care? He addresses and dedicates poems to named people, strangers to us, dear to him, who come to embody an enduring poetic conflict between private and shared significance.

His take on introspection is similar. In ‘Coldsong’, rather than the ubiquitous sin you’d encounter in a Geoffrey Hill poem, TMDLR offers up his own errors. He explicitly distances himself from poets past (here Thomas Sackville) and their attitudes to infidelity:

Does this last line refer to them? Or are they the couple safe ‘in constancy and affection’? The ambiguity reveals a lose-lose bind. The first description is a dud, meaninglessly cosy, unrealised by agency; the last line is acutely relevant but horrifying. ‘Withdraws’ is brutally, clinically sexual, a neat reverse of the direction in which the caddish male is conventionally offensive. It is a cold poem, but original in its cruelty. Rather than labouring the typical point that humans are brutes, it likens the inconstancy of sexual attachment to ‘the wind that thrashes the maple’. And yet there’s the faintest touch of warmth in its waywardness. More subtle than the Shakespeare sonnet, it has something of the contrary devotion of ‘my mistress’s eyes are nothing like the sun’, in the tenacity with which it holds up a relationship for all that it is, while shaking out its most unsavoury imperfections.

Toby Martinez de las Rivas has a taste for the physical, the real, the particular but also a manifest love for the literary – grandly casting himself as critic, for instance, in the poem-come-manifesto ‘Chasse’. As a result there’s an unusual collision in his work between the world of intimate cares and the world of literary reference. There’s the mock-elegy ‘Skull of a Rat, Museum of Antiquities, Newcastle-upon-Tyne’ where the rodent’s bones come to parody Auden’s famous elegy in their directionless state of rest:

Even the rhythms mimic those of ‘Stop all the Clocks’. There’s also perhaps a snide-swipe at Larkin in the ‘Poem, Three Weeks After Conception’, where instead of wishing simplicity on the unborn child, as Larkin does in For Sally Amis, he acknowledges the dystopian future promised one ‘who will live to see supermarkets dictating military policy to supermarkets’. And it ends with a satirical flourish, ‘Our Lady of Gateshead watch over us’ that subverts the generational hierarchy of such benedictions by hailing baby as Lady, which may double up as joke about Jesus (infant-worship).

His attitude to his own poetry is similarly playful. Take the declarative first line of blackdowns:

Or the sublime realisation of a storm a few lines later:

And contrast these with the last line of Ptuj, a later poem:

The alternation of registers, between epic locution and everyday vernacular, can be jarring. I suspect some readers will dislike it. But, while it could be dismissed on grounds of personal taste – as moody? – it is harder to fault intellectually. In terms of poetic contiguity, his rhythms and images are superbly crafted together and there’s a formidable power of voice running through the disparate manners of writing.

But more importantly, his style is not polyglot for the sake of appearing postmodern, but as apt a reflection of experience as any more consistent patter might be (if not more so). Life is comprised of high and low registers; people are yet more erratic, lost in deep thought, idle daydream, base instinct, boredom. The drastic shifts of tone, subject, and rhythm in TMDLR’s poetry keenly attend our more morphic natures and they may be unexpected but they nonetheless strike true. In this sense, he is the most vital kind of contemporary writer: both a postmodernist and a realist, because a fragmented, quicksilver language is perhaps the only one that can honestly convey the world as we now know it, or fail to.

Rose McLaren is a writer and artist who lives in London.

View all posts by Rose Mclaren →