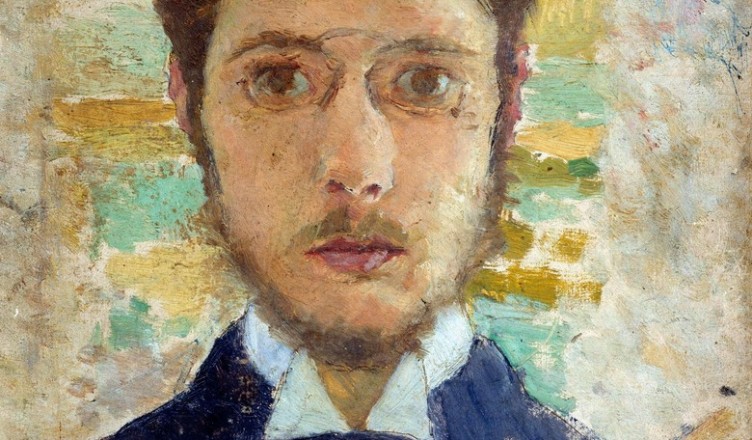 ‘Pierre Bonnard: The Colour of Memory’, the first major exhibition of Bonnard’s work in the UK for 20 years, opens at the Tate Modern today.

Four canvases of drowning green, grass so deep,
so apple-filled, it overwhelms,
lead me to what I think I know of him:
the limpid figure in the oval water,
her blurred, elusive features and those planes of light.
She slips between the histories: Renée/Marthe;
her names as fitful as a flare-lit river,
her life, the transience, distilled, he sought.

He has trapped her in amber; he has forever
fixed her flux. She is all iridescence.
Her body, weightless, passive, floats in time.
The slim hands drift: but, still, her grip is strong.
She is the blue of evening and the lemon of mimosa.
She is the lilac echo of a yellow song.

What is that face that plays upon the water?
Whose lambent body swam before his sight?
Is she unchanged now that his art distorts her,
the sapphire figure etched in lines of light?
Ever unstill, she challenges the frame.
Voiceless; she has no mouth to speak her name.

When Marthe met Pierre she lied about her age.
Was that untruth the tipping point, the prelude,
that wrote her life in water on the page
of his desire; no future but to collude?
Through richly textured rooms – umber, marine-
she moves; she moves, she’s viewed, she grows unseen.

Yet now, just as I look, I see her rise
and shake out heavy strands of auburn hair.
The purples pooled along her arms, her thighs,
she marshals, climbs out and confronts his stare.
Triumphant. Colour, drawn to her, refracts.
Sun-spangled, sure, she demands herself back.

I’d arrived at the Musée d’Orsay on a vélib ten minutes before closing, my future and my past unspooling around me, blown through by every breeze that crosses Paris. Four canvases of drowning green, grass so deep, so apple-filled, it overwhelms, lead me to what remains of me. And I can breathe again.

Suddenly the note about his lover, Renée; she committed suicide weeks after he married Marthe. Now, I cannot choose but see her in every liquid picture, so much dissolution. Her life writ large in every exhibition text; there is a trajectory of increasing abstraction in his paintings. It is a terrible feeling, to be becoming less distinct.

I used to have a contour. There used to be a boundary between myself and the world. Now, the leaf-shape is a blizzard. Now, when I seek out the horizon, it’s no longer there. Has it moved to the inside of my mind? My eyes alight on the final text. It is a moment of grace: Shape does not have to be seen with an outline around it; shapes can be read as mere changes of colour. Colour is an end in itself, a way of experiencing the world.

If, at Giverny, blue and green held me, dissolving, gold and lilac carry me through. Now at the exhibition’s end, the strangest of gifts: Bonnard delivers me home. To a purple dusk and to Irish light, the long evening ebb of it, driving the slow road west in late summer when life shrinks to loved voices in a low-lit car interior. The beam is off, the way ahead, discrete pools of light. The road exists only as far as the yellow of the headlamps choose to pick it out.

Ellen Cranitch's first collection, 'The Immortalist', was shortlisted for the Seamus Heaney Award for Best First Collection 2018. She is currently Lecturer in Creative Writing at the University of Hull where she runs the poetry modules.

View all posts by Ellen Cranitch →