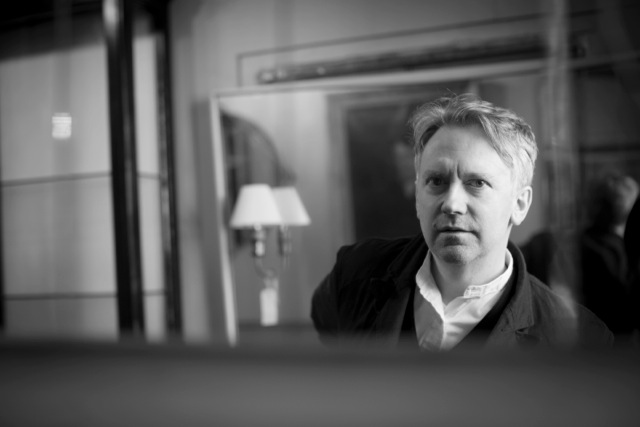 ‘Poetry And – The Red Egg’, a free talk and poetry reading with two award-winning writers, poet Paul Farley and scientist Tim Birkhead, takes place on Tuesday 28 November at King’s Chapel on the Strand, 7-8.30pm. Curated by Ruth Padel, Paul and Tim will share their passion for birds, birds’ eggs and the mystery of human engagement with them. Please register for this free event, with free wine, here.

Below, Nadia Saward profiles Paul via a review of his most recent collection. A previously unpublished poem by Paul, ‘The Mystery’, can be read here.

In the titular poem of Paul Farley’s fourth and most recent collection, The Dark Film (Picador, 2012), an ‘unrated dark’ film, that appears as if it was shot ‘midway through a power cut’, goes on general release in cinemas. The further the film reaches, the more ‘audiences start seeing things’. Though the film itself hasn’t changed, people’s perceptions have. By the time the film has reached the hinterlands of society, it ‘crackles like a bonfire’. Here, Farley has seamlessly created a layering of perceptions, as the film is passed from eye to eye, the more ‘vibrant’ its darkness becomes. This feels rather emblematic of poetry: as a poem travels from reader to reader, it gains meaning in some places and loses it in others. In the end, the poem is an amalgamation of the perceptions that each reader has brought to it. In order to present this poetic process, Farley doesn’t resort to hyperbole, or a stuffy conceit. Instead, he achieves depth of meaning through simple, sharp language and tightly-formed metaphor.

The Dark Film delves into the realms of memory, and its poems are filled with a nostalgia and loss that are at once personal and universal. Farley’s ability to use language that disconnects the poetic speaker and simultaneously invite the reader to inhabit the poem is illustrated in ‘Big Fish’. He describes the act of returning home as being ‘like returning to a natal pool / after years of doing business in great waters’. The saying of the ‘big fish in the small pond’ permeates the poem, as the poetic speaker turns their attention on the reader, inviting them to enter the poem. Instead of writing in the first-person and making the poem about a very specific experience of returning home, Farley writes ‘the driver lets you off at the foot of the hill’, ‘you pass the substation’ and ‘before long / your birth street greets you’. Rather like having your horoscope read, Farley constructs a series of phrases that simultaneously feel incredibly personal yet can be applied to anyone reading the poem. Because of course, who hasn’t had the experience of returning home – perhaps from university or having moved away – to discover that the neighbourhood once so familiar appears to have shrunk a few sizes? That is not to say this is a light-hearted poem that reaches into the past with rose-tinted glasses. In fact, the last line of the poem, ‘teatimes in doorways where no-one remembers your name’, suggests that Farley regards this nostalgic return home as intertwined with a sense of loss. The use of ‘doorways’ as a transitive place implies a sense of impermanence; perhaps the poem is telling us that although we may be able to physically return to the place of our younger years, doing so cannot recreate our earlier experiences.

Farley opens up the theme of nostalgia in a more direct fashion in ‘The Milk Nostalgia Industries’. Here, he focuses on two words, ‘parlour’ and ‘dairy’, that suddenly become loaded in the context of their nostalgic effects. As we are now living in a time when milkmen are no longer a common sight (certainly not in London anyway) these words take on a wistful weight; they cannot be separated from their historical use. The poem reflects how ‘parlour’ yields the notion of ‘Jane Austen sitting on a milk stool’; it is quaint and quintessentially English. Farley interprets ‘dairy’, on the other hand, as representative of the ‘road maps’ blank regions, / where sewage works and abattoirs and stud farms / exist’, a place outside the reach of ordinary life, existing on the outskirts of society. Somewhere between the two, he establishes the ‘Milk Nostalgia Head Office’. As he achieved with roll of blank film in ‘The Dark Film’, in this poem Farley utilises the object of milk to symbolise a homeliness (and homesickness), a return to a simpler past. However, in the poem’s end stanza a darker subtext arises. The milk that the speaker drinks on their tour of the ‘Head Office’ is described as turning ‘black / as bull’s blood’ and it is hinted that this coincides with the speaker discovering that ‘my father was down there’ and ‘my mother carrying a glass lit from within / to bed’. The milk has unified the speaker’s memories, but its turning black in colour suggests that these are not necessarily pleasant memories, perhaps they are even painful ones, bitter to digest.

Through seemingly ordinary and unremarkable mediators, Farley confronts themes of memory and loss in a subtle, unostentatious style that enables the reader to step easily into the speaker’s shoes. With more space I could also impart how The Dark Film presents a finely-tuned aesthetic awareness of the relationship between the natural and civilised world, chiefly through the metaphor of electricity and The Grid. But, for now, this brief introduction to Farley’s compelling body of work will have to suffice.