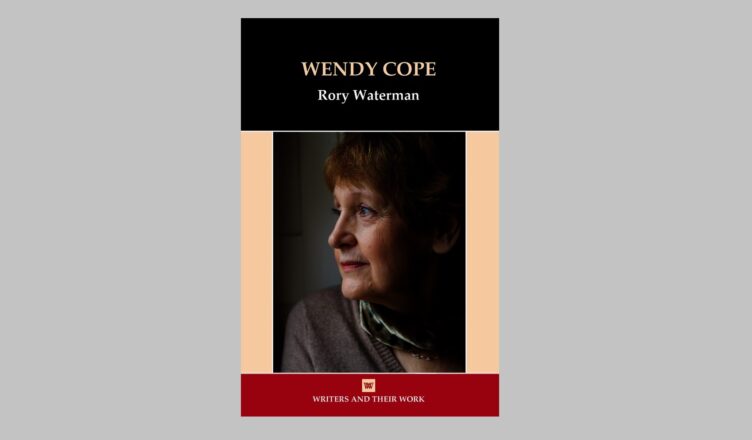 Rory Waterman writes: This is a slightly edited short excerpt from my recent book Wendy Cope (Liverpool University Press, 2021), reprinted here with thanks to the publisher. In 2018, I was asked to review Cope’s new collection, Anecdotal Evidence, for the Times Literary Supplement, which got me thinking: why has nobody written a book on her poetry? I decided to try to write that book. Most of it focuses on her major collections, but I also uncovered many uncollected and unpublished poems, as well as a few surprising hidden gems, such as the poem discussed here. You can order the book here. For a limited time, LUP is giving 30% off the cover price to all orders that use the code ‘COPE30’ when prompted at checkout.

In 2018, shortly after the appearance of her fifth collection Anecdotal Evidence, Wendy Cope published the 94-line Saint Hilda of Whitby, in a limited edition of just 100 copies.[1] It is a cantata to mark the 125th anniversary of St Hilda’s College, Oxford, set to music by Nicola LeFanu (both artists are alumni), and first performed during the College’s celebrations on 18 February 2018. As Cope notes, ‘It wasn’t quite finished when we put Anecdotal Evidence together and, anyway, [Cope’s editor at Faber] Matthew Hollis didn’t think it fitted.’[2] Certainly it is unique in Cope’s oeuvre, taking the form of a short verse play for four characters with interventions from a Chorus, and had it appeared out of context in her most recent collection it might have given the strange impression the author had suddenly and unequivocally found God in an austerely medieval guise. Its principal source is Bede’s Historia Ecclesiastica Gentis Anglorum (Ecclesiastical History of the English People) (c.731), Book IV, Chapters XXIII–XXIV, from which is constructed an imaginative retelling – all of its details lifted from the Latin source – of the story of Saint Hilda (c.614–680), Abbess of Whitby Abbey (then known as Streanæshalch). The poem recounts the miracles said to have surrounded her, and principally her influence on the lay brother and cattle-herder Cædmon (c.657–684), here ‘Caedmon’, the earliest named author of an English poem.[3]

The cantata is bookended by the Chorus presenting the same nine simple diegetic lines about Hilda, in which we learn that everyone from royalty to monastic brothers ‘Loved the wisdom in her face’ and, in a repeated line (so occurring four times in the poem), that ‘All who knew her called her mother’. The former quotation is a tightened paraphrase of part of Bede’s account;[4] the second is taken verbatim from Bede, who notes, in A. M. Sellar’s translation, ‘All who knew her called her mother because of her outstanding devotion and grace’ (Bede, 329). The poem’s first solo speaker is Breguswith, Hilda’s mother, who tells how she ‘dreamed that my husband was taken away’ and that then a ‘beautiful necklace of jewels’ suddenly appeared on her, and as she reached for them ‘a powerful light […] shone from my hand’. The Chorus then informs us ‘The dream came true. And Hilda was that light. / Her father murdered, she in exile learned / Of Christ and of his mysteries’.[5] Events being foreshadowed by dreams becomes a leitmotif in the poem, as do miraculous occurrences surrounding Hilda. She is the poem’s unequivocal hero.

We are then told that Bishop Aidan sought her out to become Abbess at Whitby (Cope leaving out Hilda’s time in exile from Northumbria and then as a nun at Hartlepool Abbey), and presented with the first of four speeches from Hilda, who decrees that ‘all shall live in peace and charity’ at Whitby. The Chorus then intervenes to let us know Hilda ‘did not think it wrong / To have a banquet, sing a merry song’, and here the poem picks up the story of Caedmon, which is given the middle 41 lines, although he only speaks once. Caedmon left the banquet and ‘composed himself to rest’ (Bede, 333) in the stable – ‘To watch the oxen sleeping in the byre’, as the poem has it – because he knew no songs so could not join in. While asleep, Bede writes, he dreamed that a voice encouraged him to sing ‘the beginning of creation’ (Bede, 333). Or, as Caedmon puts it in Cope’s poem:

This is then followed by the most remarkable part of Cope’s poem, her translation of ‘Cædmon’s Hymn’, his sole remaining work, the discussion of which requires some foregrounding. In Historia Ecclesiastica, Bede tells us that ‘he straightway began to sing verses to the praise of God the Creator, which he had never heard’ (Bede, 333), and then provides a Latin translation of the poem:

Extant Old English versions of it survive in glosses to and translations of the Latin, such as this eighth-century Northumbrian version:

Elaine Treharne has translated this into modern English, with fidelity to semantics taking necessary precedence over considerations of prosody:

Bede acknowledges in an aside that ‘verses […] cannot be literally translated out of one language into another without loss of their beauty and loftiness’ (Bede, 333). This is a constant challenge for the translator, especially of poetry, and all poetic translations might more accurately be described as ‘versions’; although it also provides a creative challenge and opportunity. Cope’s version strays from direct translation considerably more than Treharne’s. Moreover, it owes more to Bede’s rendering than to the Old English, both in lexical choices and the formal decision to avoid the heavy caesurae and alliteration of the original, which typifies Old English verse:

For the most part, Cope’s version retains the four heavy stresses in each line typical of Old English, but does away with them in her especially effusive third and fourth lines, both of which can be stressed either as pentameters or hexameters, and also in the final line, which matches Bede’s version by closing with a short sign-off more reminiscent of a prayer. Cope also translates ‘Nu scilun herga’ (‘Now we ought to praise’) as the slightly more tentative ‘Let us praise’, and emphasises this invitation by repeating it in the third line, making Caedmon further stress his already fervent desire to lead collective praise. Moreover, Cope omits the reference to ‘middingard’, ‘middle-earth’, the world inhabited by humans in a medieval Germanic conception of cosmology, keeping the more readily understood ‘earth’, and avoids the linguistic omission of women from God’s Creation. In doing so, Cope also plays with the order of the original: her fifth line is a version of the second half of the seventh in the original, and her sixth line is a version of the original fifth and first half of the sixth, with the two half-lines between omitted. As a result, her rendering simplifies the construction of the original in its fifth to seventh lines, so that we are presented with God the protector who made the heavens and then the earth, and it contains one fewer line than the original and other verse translations: she has, uniquely among published versions, abridged this nine-line poem in her translation, as well as simplifying it.

Saint Hilda then goes on to abridge Bede’s account of what happened next: Hilda tells Caedmon, ‘You are indeed inspired by heavenly grace’, and ‘Henceforward Caedmon spent his cloistered days / Learning Holy Scripture’ and writing ‘songs of praise’.[8] Then we learn that he ‘died a peaceful death;[9] on the other hand, ‘Begu (a nun)’ informs us in the poem’s final solo passage that Hilda endured ‘years of suffering’. The nun then recounts that she, too, had a premonitory dream: ‘Of Hilda’s soul ascending’. Then ‘after I awoke at break of day / They brought me news that she had passed away’. Bede writes that Begu was a nun at Hacanos (Hackness), thirteen miles from Whitby (Bede, 334), although Cope’s poem leaves it implied that she is in a different part of the same monastery, directly under Hilda’s care.[10] Here, in any case, Begu’s account mirrors Caedmon’s miracle, precipitated by a somnambulant revelation. Hilda’s life is thus marked both at its inception and end by miracles, further implying that Caedmon’s miracle in the middle of her life was also a product of Hilda’s divinity.

Cope’s poem is accessible to a wide modern audience; many academic accounts are not, and of course neither are the Latin and Old English originals. Her poem embraces the didactic tone common to much Old English verse, but uses this both to give it an austerely medieval air and to concentrate the complex narrative into an easily digestible, relatively short, highly readable piece. She also makes other minor adjustments that might irritate scholars, but aid wider comprehension. For example, she eschews Old English spellings that often used letters and other scriptural elements not familiar now (for example, Breguswīþ becomes Breguswith); Streonæshalch is not mentioned and is replaced with the familiar Whitby, a place name resulting from Viking invasion postdating Hilda’s time; and her poem’s speeches, with the exception of ‘Cædmon’s Hymn’, almost entirely ring with the inherent musicality of more modern rhymed pentameters or tetramaters. Moreover, the poem is noteworthy for emphasising that the herder-poet’s ‘miracle’, and therefore the symbolic birth of the English poetic tradition, was the result of the miraculous effects of Saint Hilda. It highlights a woman’s role that has largely been overshadowed in cultural memory, and gives that to us in fresh, simple language.

[1] Wendy Cope, Saint Hilda of Whitby (Ely: Jericho Press, 2018). No page numbers; poem text on five pages. This is a handsome large-scale volume, printed on uncoated bond paper, and Cope’s first small-press publication since the 1980s. ‘I asked a neighbour with a printing press in his shed, J. F. Coakley of Jericho Press, if he was interested in doing a limited edition. I like what he’s done.’ Letter from Cope to author (26 February 2019).

[3] Lay brothers were illiterate members of the monastic community, who performed manual work rather than worshiping God through book learning.

[5] According to Bede, her father, Hereric, a nephew of Edwin, King of Deira (which became part of the Kingdom of Northumbria in 654), was poisoned when Hilda was a small child, and she was then brought up in Edwin’s court, converting to Christianity alongside him in her childhood (Bede, 325).

[7] Both versions are taken from Elaine Treharne, Old and Middle English: An Anthology (Oxford: Blackwell, 2000), 1–2.

[8] In Bede’s account, ‘They expounded to him a passage of sacred history or doctrine, enjoining upon him, if he could, to put it into verse.’ He returned the next morning with ‘most excellent verse’ and was then instructed ‘to quit the secular habit, and take upon him monastic vows’ (Bede, 333–4).

[10] Bede also mentions an unnamed nun at Whitby who ‘saw [Hilda’s] soul ascend to heaven in the company of angels; and this she openly declared, in the very same hour that it happened, to those handmaids of Christ that were with her; and aroused them to pray for her soul, even before the rest of the community had heard of her death’. This more closely echoes Cope’s narrative, which conflates the two nuns (Bede, 334).

Rory Waterman's collections are 'Tonight the Summer's Over' (Carcanet, 2013; a PBS Recommendation, shortlisted for a Heaney Award), and 'Sarajevo Roses' (Carcanet, 2017; shortlisted for the 2019 Ledbury Forte Prize). His third, 'Sweet Nothings', was published by Carcanet in May 2020. His other books include 'Poets of the Second World War' (Northcote House, 2016). He is Associate Professor of Modern and Contemporary Literature at Nottingham Trent University, writes criticism for several publications, and co-edits the pamphlet press New Walk Editions.