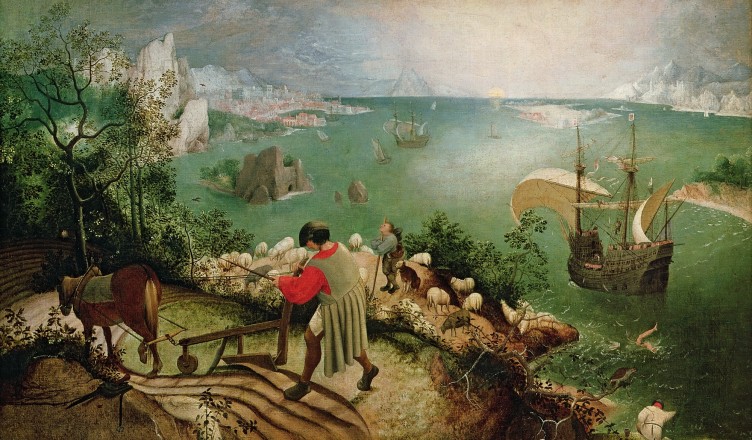 Pieter Brueghel, Landscape with the Fall of Icarus, c.1560

What happens when you are asked to review a book or a painting? You will undoubtedly attempt some kind of objective analysis but, ultimately, your review will be subjective, influenced by your own ideas, values and experiences, perhaps even the mood you happen to be in while writing the review. So why should we assume that an ekphrastic poem, responding to a work of art, must be objective, un-biased, factual?

The term ‘ekphrasis’ and our interpretation of it, has evolved over time, but it is now most commonly used in reference to poems which describe or respond to specific works of art. W.H. Auden’s poem ‘Musée des Beaux Arts’ refers to Brueghel’s painting Landscape with the Fall of Icarus (above), and it has become one of the most popular ekphrastic poems of all time. Numerous poets have since responded to the same painting, and to other paintings by Breughel. Even Sylvia Plath, who is more widely known as a confessional poet, wrote a small number of ekphrastic poems, including ‘Two Views of a Cadaver Room’ which responds to Brueghel’s Triumph of Death.

While researching this essay, which was originally completed as part of my MA in Creative Writing, my own perspective changed. I began by analysing a series of ekphrastic poems in the context of Modernism, assessing techniques used by poets which could be traced back to that key moment in literary history. Auden wrote ‘Musée des Beaux Arts’ in 1938, after the height of Modernism, while Plath’s work, written two decades later, is most often read as confessional poetry, but a close examination of ‘Musée des Beaux Arts’ and ‘Two Views of a Cadaver Room’ does reveal the use of a number of Modernist techniques. However, the more closely you examine the dynamics of each poem within the context of Modernism, the more clearly each poem reveals its true subject, that of subjectivity itself.

One of the main tenets of Modernism, according to Ezra Pound, was ‘direct treatment of the “thing”’, but ekphrastic poetry appears to do the very opposite, describing a subject that is second-hand, interpreted originally by the artist. This depends, however, on what the “thing” is. It could be the painting’s subject, or the painting itself, or the process of viewing it. My analysis will illustrate how ‘Musée des Beaux Arts’ and ‘Two Views of a Cadaver Room’ both focus, not on the subject of a painting, but on the act of viewing and interpreting it.

A Focus on Context

Auden’s poem contains no mention of Icarus or his painting until over half way through. The first, longer stanza describes the painting’s context: in a museum, alongside other paintings, and the title, ‘Musée des Beaux Arts’, also emphasises this museum context. Thus, it is clearly not intended as a straightforward poem about the fate of Icarus, about ‘suffering’, or even about this particular painting; it is primarily a poem about context:

Elizabeth Bergmann Loizeaux has suggested that Auden wrote this poem in response to criticism of his earlier work ‘Spain’, where he was accused of being indifferent to the suffering of others. She describes how he had, in fact, recently observed the devastating effects of warfare first-hand, and was acutely aware of the contextual complexities behind any conflict. Taking this into account, we can read the poem as an assessment of human nature; people are subjective, and they interpret what they see (art, historic events, suffering, poems) in the context of their own limited knowledge and experience. ‘Musée des Beaux Arts’ could be an implicit criticism of Auden’s own critics, a coded message implying that they have mis-read and mis-understood his work.

As with Auden’s poem, this juxtaposition questions how we interpret both art and life. Love and death are experienced directly (through physical contact), then indirectly (through the painting). Plath suggests that a person’s experience influences their interpretation of art, implying that real love is unattainable. The lovers in the painting are ‘Foolish’ to think that death will not triumph. She also implies that art influences our understanding of life; love is revealed to be nothing more than a ‘cracked heirloom’, as the medical student’s romantic gift of a heart is counterbalanced by the fact that it is dead.

A Focus on Form

James Heffernan has identified an emphasis on ‘shaping’ the poem as a key aspect of Modernist ekphrasis, as it breaks away from description into a reflection on the nature of art itself, drawing attention to its own artificial construction. Auden draws attention to the form of his poem by creating a structure which echoes the composition of the painting. Just as Brueghel foregrounded the context of a rural landscape over the depiction of Icarus’s fate, Auden focuses on the museum context, relegating the painting itself to the smaller, second stanza. He also echoes the traditional sonnet form, with two stanzas which act as octave and sestet, and a volta in the centre, as his argument moves from general to specific:

This method of ‘approximating’ towards a traditional form was emphasised by T.S. Eliot as the best kind of Modern verse, neither sticking rigidly to the rules nor breaking entirely free of them.

The themes in Plath’s poem come in pairs, or alternatives, as implied by ‘Two Views’ in the title. The first section shows love and death in a real-life situation, followed by love and death depicted in art. She also explores the roles of the active male (as medical student or artist) and passive female (observing science or artwork). This binary theme is emphasised by the form and content of the poem: the two sections are each divided into two stanzas, ending with a couplet; there are four corpses, two lovers in the painting, two lovers in the room, and four pairs of hyphenated words. This, along with the description of dissection and an emphasis on visual details, such as the heads that have ‘caved in’, invites the reader to examine the poem’s physical form on the page. Her poem also approximates towards the form of a traditional sonnet, as Auden’s does, with its two sections, two final couplets and end-rhymes.

The Static Moment and Subjectivity

Another aspect of Modernism was the desire to present something instantaneously, without narrative development. All ekphrastic poems respond to a static artwork, and ‘Musée des Beaux Arts’ draws attention to this fact. Although the poem does appear to provide a narrative, describing future actions, such as the ship which ‘sailed calmly on’, as Heffernan has pointed out, Auden uses the subjunctives ‘may’ and ‘must’ which indicate the presence of a ‘speaker’ behind the poem. This is emphasised by colloquial language such as ‘doggy’ and the reversed syntax of the first line, placing ‘About suffering’ first, so that the line sounds like speech, indicating that this is not an objective narrative, but someone’s suppositions about what may have happened and what might happen, as they observe the static moment.

In ‘Two Views of a Cadaver Room’ Plath refers directly to the spatial aspects of The Triumph of Death. The word ‘panorama’ reveals its scale, and she describes the compositional arrangement of the figures:

Plath is usually read as a confessional poet and, although she refers to her own experience in ‘Two Views of a Cadaver Room’, she uses the third person: ‘The day she visited’. This suggests that the description of the painting in the second stanza is a subjective account; this person views the painting through the context of their own experience.

Another key theory of Modernism put forward by Ezra Pound was to ‘compose in the sequence of the musical phrase’, breaking away from strict metre and using the rhythm of a poem to reinforce its meaning. Auden uses alternate end-rhymes with some variation, creating a rambling rhythm in his first stanza, emphasised by varied line lengths, enjambment, and caesura, to break up the pace. This gives the sense, as Loizeaux argues, of someone wandering through a museum, pausing at each exhibit. The longest line is elongated by a list of daily tasks:

The semi colon creates a pause at the end, drawing our focus onto the ordinary tasks, away from the historic event mentioned in the next few lines. This reinforces the poem’s emphasis on context; people will interpret what they see in the context of their own, often quite ordinary, experience.

Both Plath and Auden use their sonnet-like end-rhymes to draw attention to the poem’s form and reflect its meaning. Plath’s end-rhymes don’t adhere to a set pattern, but each stanza begins and ends with a matching end-rhyme: ‘room’ and ‘heirloom’, ‘slaughter’ and ‘corner’, emphasising her binary theme. There is one line which stands out, being the only one with no matching end-rhyme: ‘In their jars the snail-nosed babies moon and glow’. Jeffrey Meyers has pointed out that this line echoes the ‘cadence’ of T.S. Eliot’s refrain, ‘In the room the women come and go’, in ‘The Lovesong of J. Alfred Prufrock’. This could be evidence of allusion, another Modernist technique. The babies are in ‘jars’, similar to the image Plath used in The Bell Jar to describe depression, and Eliot’s refrain depicts the monotony of life in the context of Prufrock’s futile search for love. His line also precedes a description of women discussing another Renaissance painter: ‘Talking of Michelangelo’. This reinforces Plath’s connection between viewing art and personal experience, and her conclusion that love is an artistic illusion.

Another aspect of Modernist poetry, according to Eliot, is that it must be ‘difficult’. Howarth argues that Pound’s poem ‘In A Station of the Metro’ achieves its difficulty by juxtaposing two images without explanation, allowing for ‘endless’ interpretations, so that the reader is required to experience it, before understanding it. Plath also presents her two poem sections without explanation, achieving a similar effect. This may also reveal some influence from the Cubist painters, as she juxtaposes ‘Two Views’ simultaneously, emphasising her theme of subjectivity.

Auden’s poem alludes to ‘The old Masters’ in the first stanza, which some critics have identified as two other paintings by Brueghel, but Heffernan argues that these paintings do not depict obvious scenes of suffering alongside indifference, but are actually linked in other ways, such as their depiction of a traditional text: Biblical narrative or classical myth. If this is correct, then this juxtaposition reinforces Auden’s emphasis on context, drawing attention to how we view artwork, with (or without) contextual knowledge from a literary source.

The Significance of Context

Both Auden and Plath reveal how people interpret what they see in the context of their own experience, and their experience in the context of what they have seen. The similarities of technique and theme in these two poems may suggest that ‘Two Views of a Cadaver Room’ could have been inspired, in part, by ‘Musée des Beaux Arts’. Whether or not this is the case, it is clear that both of these poets explore the subjective process of interpreting art and the significance of context, and that they use a variety of Modernist techniques to achieve this.

Heffernan, J.A.W. (1993), Museum of Words: The Poetics of Ekphrasis from Homer to Ashbery, Chicago: The University of Chicago Press.

Rachel Carney is a PhD student based at Cardiff University and funded by the AHRC through the South West and Wales Doctoral Training Partnership. Her research focuses on the practical application of ekphrastic poetry as a tool for engagement in art museums, and she is working in partnership with the National Museum of Wales in Cardiff. She has an MA in Creative Writing from Manchester Metropolitan University and an AHRC funded MA in Museum Studies from Newcastle University. She is also a practicing poet, and has worked in the museum sector for a number of years.

View all posts by Rachel Carney →

‘Mandrake and Scammony’: on the poems of Dorothy Molloy