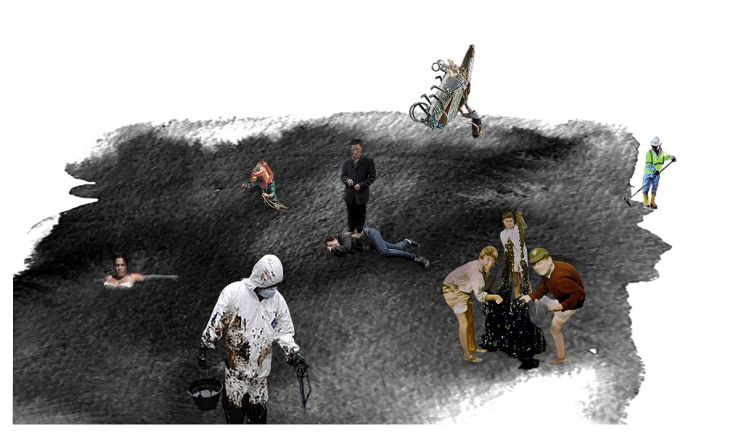 Given that Juliana Spahr’s poetry seeks to establish connection between the individual and the world, there is a certain irony in the way her work has received little attention outside of the United States. Born in Ohio in 1969, Spahr has written eight collections of poetry and is often compared with – and has worked in editorial roles alongside – poets such as Claudia Rankine and Brenda Hillman. In an interview with Jos Charles, Spahr explains that gaining a PhD from SUNY Buffalo left her with ‘this idea that I was an experimental poet. And I was, thus, against lyric and confessionalism’. However, in taking up a teaching position in Hawai’i, Spahr recognised the unnecessary limitations of such divides between the experimental and the lyric. Indeed, in the last decade, Spahr has gone on to manipulate the lyric form, reimagining, in particular, the romantic motif in view of the global rather than the personal in order to explore contemporary political, social and environmental issues. This manipulation of the lyric remains consistent through her most recent collections, recurring in different forms as if Spahr were trying to find the most effective way of seeing our attachment to each other in terms of our less than perfect attachments to the other.

The Iraq invasion of 2003 underpins Spahr’s sixth collection, This Connection of Everyone With Lungs (2005). The fact that Spahr was living in Hawai’i at the time of the invasion informs her approach and, as she explicitly states in her note to the poems, prompts her use of the lyric:

I felt I had to think about what I was connected with, and what I was complicit with, as I lived off the fat of the military-industrial complex on a small island. I had to think about my intimacy with things I would rather not be intimate with even as (because?) I was very far away from all those things geographically. This feeling made lyric—with its attention to connection, with its dwelling on the beloved and on the afar—suddenly somewhat poignant, somewhat apt […] more useful than I usually find it.

Titled like diary entries, the poems begin to test this premise with an omniscient view of injustice and violence across the world. ‘December 2, 2002’ begins with the statement: ‘As it happens every night, beloved, while we turned in the night sleeping uneasily the world went on without us’ and goes on to list particular events:

Those experiencing night in another time zone are literally unconscious of events happening elsewhere. The lyric ‘beloved’ enforces this separation of the personal and the global. Yet, this separation becomes questionable as Spahr goes on to state ‘Beloveds, our world is small and isolated’. Spahr’s use of the term ‘world’ is uncertain. At once ‘world’ is a common synecdoche for personal space: for the room or even the bed in which ‘we turned sleeping’. Clearly this description confers a sense of isolation. Simultaneously, however, Spahr’s ‘world’ refers to the actual globe that being ‘small and isolated’ in the universe increases the importance and possibility of global connection and community. By suggesting both understandings of ‘world’ Spahr brings them closer together to suggest both the limitation and possible expansion of an individual’s relationship with the world.

Rather than playing with this kind of paradox, Spahr puts her energy into trying to overcome it. In ‘December 8, 2002’ Spahr describes her relationship with others estranged through space as analogous to a relationship between lovers. The initial scene is one of simplicity and sensuality in which lovers are looking at clouds ‘out the window from our bed as we lie there in the morning enjoying the touch of each other’s bodies’. However, this scene becomes more complex as Spahr explains a few lines later

Distorting the previous reference to a lover by making the pronoun plural radically changes the nature of the lyric and thus to the intimacy Spahr conveys. Rather than an intimacy between two people, Spahr suggests an intimacy between herself and a number of others. Indeed, Spahr’s ‘yous’ begin to feel associated with those involved in the acts of violence she continues to list (almost apathetically) throughout the poems: ‘ten killed in the Bureij refugee camp by shells from Israeli tanks on Thursday’. If searching for a theoretical framework for Spahr’s work, sociological and ecocritical arguments on global ‘cosmopolitanism’ (from the late Benedict Anderson to Ulrich Beck and Ursula Heise) have some bearing. However, Spahr’s lyrical approach is distinct in the way it proposes a radically polyamorous relationship with the world: ‘All I know is that I couldn’t get out of bed anymore at all without yous in my life. And I know that my ties with yous are not unique’. With a strange literal quality, Spahr acknowledges the impossibility of continuing life in a personal ‘world’ and thus draws attention to the interdependency we all share. This inevitable intimacy is brought to the fore in ‘March 11, 2003’ in which the invasion of Iraq features strongly. Here, Spahr interrogates a statement by President Bush suggesting he would go ahead with the Iraq campaign without international support.

The way this interconnection is figured on a range of scales (at once trivial and serious) and its lyric expression takes a more environmental perspective in Well Then There Now (2011). Much of this collection shifts between the ecological damage wrought by colonialism in Hawai’i and the damage that the development of capitalism has brought to her native United States. ‘Gentle Now, Don’t Add to Heartache’ focuses upon the latter. Beginning like an origin myth with ‘We come into the world’, the four sections of the poem gradually narrow in focus: ‘We came into the world at the edge of a stream.’ Slowly, the stream is viewed through a smaller lens: ‘We looked under stones for the caddisfly larvae’ and

Evoking E.O. Wilson’s well-known ‘biophilia hypothesis’ that argues our relationship with nature parallels our evolution, Spahr goes on to describe a love for nature and that ‘we couldn’t help this love because we arrived at the bank of the stream and began breathing and the stream was various and full of information and it changed our bodies’. Spahr departs from the kind of lyric she first outlined in the note included in This Connection of Everyone with Lungs. Rather than an erotic form of connection that centres upon the ‘far away’, there is a lyric appreciation of the natural world and an understanding of its intimate influence upon us. Yet, the self-consciousness of this appreciation (‘we appreciated the feathery gracefulness’) coupled with the past tense, suggests the loss of such a relationship with the environment is imminent. Indeed, ‘Gentle Now, Don’t Add to Heartache’ charts a turn from a world community to an introspective, environmentally-destructive individualism. A more familiar, contemporary vision of the stream arrives garishly:

Ultimately, in the fifth and final section of the poem, Spahr confesses ‘I did not know that I would turn from the stream to each other’ and goes on to record how beauty was no longer found in nature, but in ‘each breast, the folds of each other’s elbows’. Consequently, the arc of Spahr’s poem comments upon the potential of the lyric to narrow in view of environmental disconnection – to be used to identify our immediate human world and not the world outside of ourselves.

Published in 2015, That Winter the Wolf Came demonstrates further explorations of the lyric in view of the Occupation movement and ‘a world that is made by oil and by deep-water drilling’. Take the prose poem ‘Transitory, Momentary’, which messily spills open with a repetitive mixture of lines on Brent geese migration patterns, a Wikipedia-like entry on the traditional structure of songs and police clearing a park for building development. At first there seems little bringing these subjects and events together, yet as Spahr’s description of a song returns again and again just like the song’s refrain that she outlines, a poem on love and loss emerges. With obvious ties to the lyric, Spahr explains that the song often tells ‘a certain sort of story, one about having something and then losing it’. Like the much earlier mention of ‘David Letterman’s shingles’, there’s a triteness to Spahr’s writing that aims for profundity: ‘even though the song is about a minor loss, about the loss of tongue on clit or cock, the singer seemed to understand something about the other things that are lost.’ The song thus becomes a way of comparing patterns – the journeys of geese, the journeys of oil, the development and redevelopment of land – and the threatened and threatening behaviours of each.

‘[I]t might be that there is nothing to epiphany if it does not hint at the moment of sweaty relation larger than the intimate’, states Spahr. Whilst this is illustrated to some extent by considering the love song and its relation to environmental and political systems in ‘Transitory, Momentary’, Spahr’s words take on new meaning in ‘Tradition’.

Unlike her previous poems, ‘Tradition’ is marked by its portrayal of a parental relationship. Yet, quickly this relationship becomes involved with the kind of patterns described above: ‘I hold out my hand and take engine / oil additive into me and then I pass on this engine oil additive to / this other thing that once was me, this not really me.’ This ‘not really me’ stands for the child who is later described as being passed ‘a breast cup filled with sound insulation panels and imitation wood’. Echoing the pollutants detailed in ‘Gentle Now, Don’t Add to Heartache’ this poem suggests chemicals are being transferred to the child in the speaker’s breast milk. Yet, subtly there is a sense that this ‘not really me’ stands for more – perhaps even the rest of the world: it is difficult to know whether Spahr is writing figuratively or literally when at one point she mentions ‘Not really me is a ram perched on a cliff above a stream’. With the conclusion of the poem in which ‘not really me’ sings a ‘song of rebuke’, it becomes possible to read the process of ‘handing over and passing on’ not simply in terms of a mother’s breast milk transferring chemicals to a child, but of how each one of us is physically involved in a causal chain of pollutants and, as the title of the poem suggests, how these interactions with the world might be continued across generations.

Considering our connections and responsibilities on a global scale via a series of lyric exercises helps to relegate the polemic style often associated with political, social and environmental debates. Although saying that Spahr’s work is about finding ways of loving the earth makes it sound part of a new age movement, it is clear that Spahr’s work aims for greater empathy and awareness of our place in relation to those of others. Spahr’s use of the lyric not only fosters connection to places and people that we might otherwise feel disconnected from, it also illuminates the less than obvious connections we already hold with the earth on a daily, and often destructive, basis. Yet, the latter does not exclude hope. After listing the various pollutants we may well pass on to the next generation in ‘Tradition’, the conclusion of the poem suggests that it is the lyric itself, with all its connective potential, that becomes the subject of the refrain – recast in the imperative – ‘Hand this over. / Pass this on’.

Isabel Galleymore's debut pamphlet is Dazzle Ship (Worple Press, 2014). Her work has featured in Poetry, Poetry London, and elsewhere. She won an Eric Gregory Award in 2017, and lectures at the University of Birmingham.

View all posts by Isabel Galleymore →