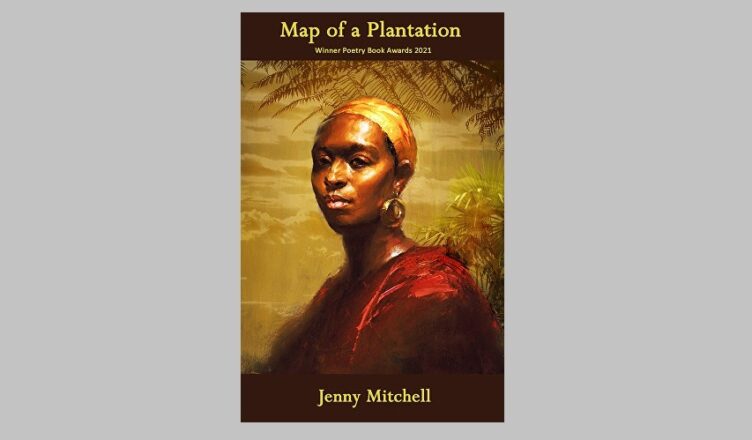 The title of Jenny Mitchell’s follow-up collection to 2019’s Her Lost Language begins with a gesture to objectivity. Map of a Plantation (Indigo Dreams, 2021) – we’re offered a sense of distance, a dispassionate realm of depiction, the chart not the territory. In reality, anyone who has ever looked at an atlas will know that maps are never simple depictions of space, but only another kind of text; subjective and skewed, they are easily-disputed mechanisms of power.

When a poet begins a collection with the title poem, you know you’re not meant to slip gently into the work, but sit up and take notice. In its tone, the poem ‘Map of a Plantation’ offers the reader a sense of precision that borders on the punctuated:

This is terse, clenched writing, compressed to the point of dispensing with articles in order to retain a delineated accuracy. ‘Dots define the dead,’ the poem continues, a chilling maxim, which hints at the human cost behind the map legend. The poem ends with the invocation of the tainted relationship which will characterise the collection as a whole: ‘The giant is the hanging tree/ apt symbol of a master./ He dominates the map./ Roots creep along a path.’

‘Master’ is a key word in the collection, and the power dynamics involved with the language becomes a focus of the work. Mitchell makes a point of contextualising some of the terms in the notes section: ‘All references to “slaves” and “masters” in this collection reflect the language used during the long period of enslavement… outside of the poetry, the author prefers the terms enslaved, enslaver, and enslavement.’ If her first collection employed the lyric, the work in Map of a Plantation is directed through the masque, with both the enslaved and enslavers depicted as characters in the larger drama. A sense of distance is being enacted, in keeping with the dispassionate theme. The precision of the title poem continues through the first section, assuming an impassive, almost neutral tone, nowhere more in evidence than ‘Burden of Ownership’, which outlines a kind of catalogue of the body politic of the economics of slavery:

People become things, subjects become objects, and the text explores how language, that definition of the subject, plays out under this power dynamic. The intent is present in ‘Lot 48’, a dialogue between the consciousness of someone who has been enslaved and the auctioneer’s sinister interlocutions:

Elsewhere, language itself becomes objectified, in the poem ‘When Mistress Speaks’. If people can become objects, then, logically, the language they speak can become a thing of envy. ‘Lord God, I crave she words/ bright gold in the mouth.’ The desire for the language is an act of insurrection on the part of the enslaved:

Later, in ‘The Book Room’, a (perhaps?) separate narrator remarks: ‘I’ve learnt the words elective mute/ by listening at cracks.’ Here ‘the mistress will no longer speak’ after an act of domestic violence, witnessed by the narrator, a house servant who is ‘not meant to talk but dust’, the odd phrasing (where dust could be both verb and noun) aligning the domestic activity with a sense of waste. The woman’s silence becomes a thing of fascination for the narrator, a shared experience of violence, emphasising the power of language, both in its privation and expression. The poem ends with a sense of escape:

The collection concludes with the poem ‘Our Mother the Cartographer’. It’s an odd poem, elusive and fragmentary, with the title gesturing towards the Lord’s Prayer, and, perhaps, Kei Miller’s The Cartographer Tries to Map a Way to Zion. The poem that points the collection towards a kind of hope, albeit a hope that is hard won, and tinged, indelibly with the marks of the past. ‘Welts across her back are deep-kicked paths/ Yes I tried to run./ Land beyond the gate beyond to him.’

Beyond the brutality and inhumanity, the idea that the enslaved becomes the map is, in the context of the thematic work as a whole, a liberating moment. Beyond God and law, language becomes the saviour of the enslaved. The map is no longer a pseudo-objective, inviolable text, but an individual subject, capable of revealing the truth, and through that truth find the route beyond the plantation.

As I read Map of the Plantation, I kept coming back to Matthew Arnold’s claim about high seriousness and poetry. This is an uncompromising collection, but why should Mitchell compromise? The seriousness of the theme is never in doubt, and the treatment of theme never allows the reader to look away. Seriousness is a maligned thing these days, perhaps rightly when it concerns the relentless egocentrism which poetry can sometimes lend itself, and there are many more things that qualify a work than a self-conscious seriousness. A great deal of contemporary poetry, or at least poetry with an ‘I’, is necessarily dependent on a pose: self-ironizing, distant, careful not to care too much. It’s interesting to note Mitchell’s approach in this collection, therefore, with the use of dramatic masque, intent on maintaining distance. Judge the work by the cost it tries to reclaim, the truth it is trying to tell. Mitchell demands to be heard on her own terms.