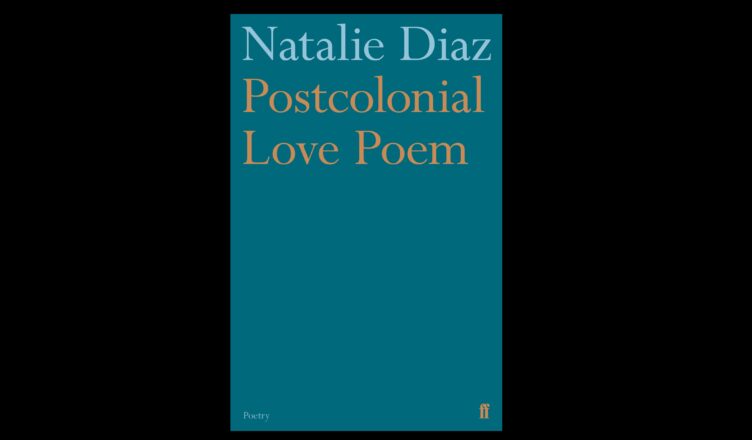 Ultimately, ‘you cannot drink poetry’. Diaz precedes this statement in her self-aware second collection, Postcolonial Love Poem, with the prayer of an Elder Mojave woman given at the site of a pipeline protest. The Elder’s words are not a substitute for water, but their cognizance of the relational necessity between humans and natural resources is just as life-sustaining: ‘The river is my sister – I am its daughter’.

Postcolonial Love Poem explores the act of breaking open, violently and intimately, as a requirement of existence in a post-colonial world. Diaz reveals how love manifests itself in both instances from the perspective of the dispossessed subject. She expresses the fluid essence of this duality in ‘The First Water Is The Body’, where she details how ‘energy is a moving river moving my moving body’, enabling violence to bear love and render love a violent act; their energies intertwined. There is the breaking open of the Colorado River into man-made tributaries and dams, a particular focus for Diaz as a Latinx, Mojave woman, but also the ruin of water, a sacred resource, in wider terms as she marks droughts in ever increasing frequency or the organ damage of those consuming the lead-poisoned water of Flint, Michigan since 2014 (‘the children pay—/and they pay in the kidneys’). Diaz underscores how the disruption of vital water sources, central to the environmental crisis, is implicated in human exploitation and is an existential threat.

Concurrent is a raw account of the breaking apart of relationships within Indigenous communities, symptomatic of settler-colonialism which licenses ongoing systemic violence. Diaz presents its overt impact in ‘American Arithmetic’ where she employs a chant-like form to detail the statistics of police killings against Native Americans, and how violence has compromised communities since 1492, through genocide and up to the present day, infiltrating the communication of love. Diaz questions:

(‘Manhattan Is A Lenape Word’)

and details a warped bid at such communication in the closing couplets of ‘Blood-Light’, how ‘one way to open a body to the stars, with a knife. One way to love a sister, help her bleed light’. Yet a sensual breaking-open runs alongside this violently deconstructive motif. Diaz favours an “I, thou” address throughout the collection wherein a nameless lover’s body is taken apart and exalted. The speaker ‘can’t stop seeing her bones. I’m counting the carpals, the metacarpals’, or enjoys recalling ‘when I broke open my mouth upon yours’. Diaz counters the Myth of the Vanishing Native by writing disappearance on her own terms, as a form of slipping into desire,

Here is her act of yielding control, actively, outside of oppressive structures.

Diaz’s focus on the delicate minutiae of human anatomy, the consistency of desert soil or the feel of water, serves as a grounding technique to anchor her poems in a tactile present moment while also stitching the collection into its overarching political and environmental urgency. A slight habit of segueing into overfamiliar lovers’ tropes, erotic fruit imagery, or overreliance on the hip and thighs, as seen in the closing volta of ‘How The Milky Way Was Made’, does develop. A tendency which is, at times, frustrating when it undercuts her original and striking imagery, often within the same stanza: such as snakes ‘disappearing like retracting vacuum cords’ into her brother’s clavicles (‘It Was The Animals’) or following ‘the wet map of you/ along whatever remains of the corridors of my life’ (‘Asterion’s Lament’). As a result, and on account, of how the collection builds on itself, poems such as ‘Waist and Sway’ are rendered more muted entries. They are overshadowed by the more devastating novelty displayed, for example, in ‘Manhattan is a Lenape Word’, where Diaz Indigenises a Nighthawks-esque scene of late-night introspection; where her existence in the city belies a genocide but still fails to negate the isolation of urban dispossession.

Diaz has a gift for opening lines: take ‘I don’t call it sleep anymore/I’ll risk losing something new’ or ‘Today my brother brought over a piece of the ark/ wrapped in a white plastic grocery bag’ for pronouncements that secure engagement. While her latest collection is admittedly sizeable, poems such as ‘exhibits from The American Water Museum’, a series of polyphonic vignettes historicising the material and psychological impact of environmental violence, and ‘The First Water Is The Body’, thrive in their meandering and exploratory length. Other poems, such as ‘Ode to the Beloved’s Hips’ or ‘That Which Cannot Be Sullied’, risk a loss in momentum as Diaz moves between disparate images for a touch too long.

Postcolonial Love Poem enjoys movement between established forms and styles. Even its free verse entries maintain a frame to support Diaz’s lyricism. We move confidently from the oratory ‘Top Ten Reasons Why Indians Are Good at Basketball’, to the long narrative sentences of ‘The Mustangs’ and the tightly controlled kennings of ‘Skin-Light’ (‘light-fruited…desire-knocked’) which project lovers’ seclusion in the middle of ‘Teotlachco, the ball court’ as the action shifts across the page with condensed energy:

Diaz is strongest at her most imaginative with desire, in moments like ‘her inside me/in a green hour I can’t stop./Green vein in her throat green wing in my mouth’ or, in a shining example of Diaz’s melancholy but often quietly playful tone: ‘I will swing my lasso of headlights/ across your front porch’, which emerges from her conscious agility in moving between English, Spanish (colonial languages) and Mojave; as well as wielding a plethora of classical, biblical and literary references, inhabiting their narratives to her own ends. Consider the colonial history preserved in the etymology of the collection’s opening poem: Spanish ‘culebra’, French ‘cabochon’, or Latinate ‘lapidary’. Every word feels delicately chosen. Diaz deploys language in this way to establish her acknowledgement of past and ongoing harm, while instead choosing to build a space of healing intimacy with these lexical ‘bloodstones’. As Diaz tells us: ‘I was built by wage. So I wage love and worse-.’

At points, stanzas can be overloaded with their myriad of influences. An inflated register results, which rubs against the more earnest, defiant voice of the most impactful entries. As such, Diaz’s references to non-Indigenous cultural canon function best when she excavates them for their essence: a sentiment of love, sorrow, or desire taken and acknowledged for their origins before Indigenising them, asking how she, as an Indigenous person, can simply exist with love and grief in a hypothetical post-colonial world:

Diaz lifts these terms out of a letter from Frida Kahlo to Diego Rivera (Diaz offers her longer translation in the endnotes: ‘you could be called Auxocromo-the one who takes color. I Cromoforo-the one who gives color.’) which are striking in their energetic likeness to Sidney’s ‘Astrophil and Stella’ (star lover and star). We remain in the territory of the star-crossed, the experimental give and take of lovers, but Diaz negotiates that binary presentation of desire to express a queer, Latinx, Indigenous one, among others and their unique tribulations. The subtle depth of desire encapsulated here primarily details an interdependence between human bodies, but also speaks to the loving mutuality essential for a sustainable relationship between people and land, a tension that sits at the core of this collection.

On ‘Bloom’ by Sarah Westcott