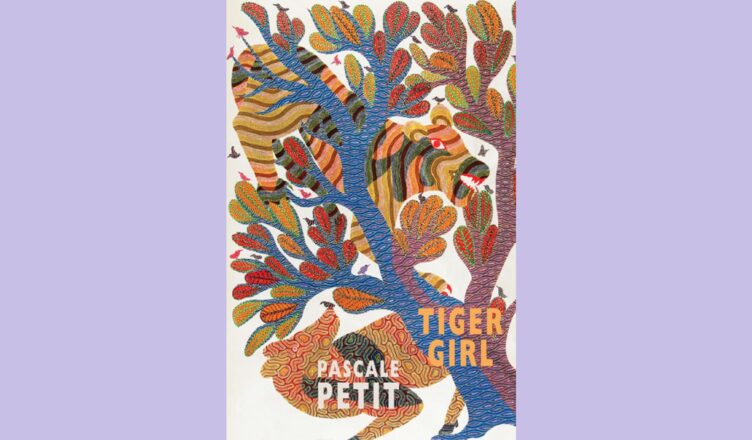 King’s College London’s popular ‘Poetry And..’ series, chaired by Professor of Poetry Ruth Padel, returns on 30th November at 5pm with ‘Poetry And… The Wild in a Time of Coronavirus’, an online event with prize-winning poet Pascale Petit and award-winning wildlife film-maker Shekar Dattatri. More details, including how to book your free ticket, can be found here.

Ahead of the event, below is a review of Pascale’s recent new collection Tiger Girl.

Pascal Petit’s Tiger Girl is a collection of love poems and elegies dedicated in equal measure to the wonderous natural world of forests and beasts, and to her grandmother, who is the Tiger Girl. The collection has been nominated for the Forward Prize for Best Collection for the year 2020.

A couple of weeks before the second lockdown in London and before I started reading Petit’s latest collection of poems, I had watched David Attenborough’s recent movie Life on a Planet at the Barbican with my three daughters. When I read Pascale Petit’s poems, the restaurants, pubs and stores were closed again, and I found myself lulled by a familiar silence on the normally busy road outside my home. In that lull, I also found myself thinking repeatedly about Sir Attenborough and then about the poetry of Petit. His movie contains on screen what Petit so eloquently expresses in this collection.

The world as we thought we had known it is coming to an end with climate change and our consumptions and consumerism. The way we as a humanity have turned our backs to the natural environment, placing above all else our ambitions and appetites, has destroyed the planet we call home. In the week I spent mulling over the pages of Petit’s poetry, folding a page here, marking a line there, the US elections also took the world center stage. The US had just stepped away from the Paris climate accord and I found myself sleepless in London, waiting for the election results. I was convinced the world would come to an end if the man fond of his golfing came to power again. And I chanced upon Petit’s poem:

Poetry at its finest is not just a melody of lives and endeavors, poetry – especially such poetry like Petit’s – bears witness to the world we have created and, much like Sir Attenborough’s latest documentary, this too is a witness statement. Petit’s witness statement records the childhood she lived when she was brought up by her grandmother, who makes an appearance in many poems, sometimes as a guardian to the natural world, sometimes as a tiger, sometimes simply as the woman who was birthed from a tribal woman and was then raised by her father’s English wife. In ‘Tiger Gran’, she comes together in all her many forms that are otherwise spread out among the other poems:

And while the book is absolutely a tribute to her grandmother, she in turn becomes a symbol of all that we need from the citizens of our world today, protectors of the wild life, green spaces, birds, wild beasts and wilderness, saving them not because we must save them for our own survival or as a moral duty, but because we as human beings are in our essence as wild as the wilderness we are destroying. Again and again, Petit comes back to what we have done:

The poet does not flinch in her unsentimental descriptions and questioning. In ‘Pangolin’:

And even though I knew she was describing the killing of the pangolin who would eventually be served as meat in a restaurant, I also felt that she was alluding to the way women like her and her grandmother, women born and bred in nature, fostered and fed by it, were also being culled by the ceaselessness of human avarice.

Pascal’s repeated encounters with the tiger, whether through the spirit and life of her grandmother, or her own stays and travels in the forests, sing of the wonder of this wild beast in ‘Jungle Cat’:

We have forgotten what it is like to be alive like this,  caught as we are in the humdrumness of our city lives, surrounded by our walls and wants, and Petit draws our attention back again and again to how only our connection to nature can save us from the numbing ambivalence of our urban lives. The last couple of poems dwell on the way her grandmother dies. The poet describes how her grandmother must have seen from her window the glory of her flowers blooming in the garden below and then dies by falling from the stairs and breaking her neck.  Although the prescience of her grandmother’s impending death is there in many poems through the collection, it is only in the last few poems does she describe the event. And then she gives a date, November 5th, as the day of her passing. The fact that I was reading these poems so close to her death anniversary (the US elections were on November 6th) deepened my connection to this tiger girl, who lit the way for the poet to find herself in the wild.

Even in closing, we are reminded that this collection is not just an ode to her grandmother, these poems are an elegy also to the world we are destroying:

Chandra Ganguly is a PhD candidate at King’s College London. An MFA graduate from the Bennington Writing Seminars, her work has been published in BuzzFeed, Narrative Magazine, India Currents, NDTV and Arrowsmith Press. She is the founding editor of the art and literature print magazine Speak The Magazine.

View all posts by Chandra Ganguly-Meyer →