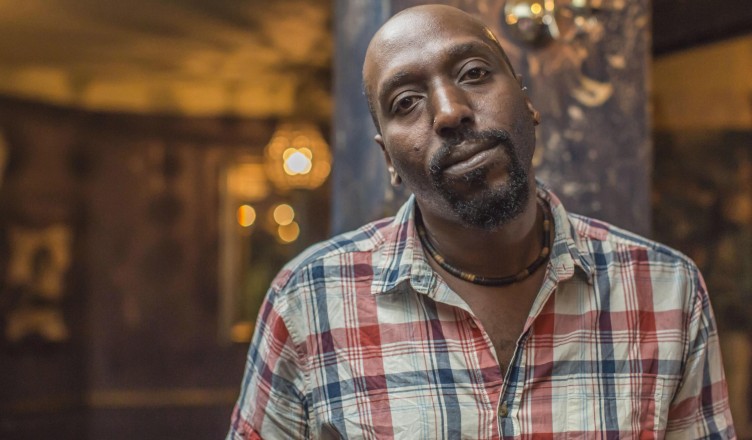 The first poem in Kei Miller’s first Carcanet book, There Is an Anger that Moves, opens like this:

What thematics are we being given to work with? First, the experience of being a Jamaican man in a racist Britain. Secondly, the relation of that prejudice to language and the way language is used. Third, an inability to ignore these things, a wondering beyond our immediate desire to turn away. The mocking woman’s humanity – her possession of a heart – renders her impossible to dismiss; we’re forced to look further than our initial reactions, and into the cultural and linguistic engines behind such conflict. Miller’s career will be, to some extent, an exploration of the way these things tangle: how does language make us who we are? To what extent do we create and control language, and to what extent does language control and create us? What does this have to do with poetry?

One answer to those questions is found in the examination of why, in these books, poetry is often figured as song, or as religious incantation, as prayer or psalm or benediction. Because despite an insistence on these forms, this isn’t pure lyric poetry and neither is it, essentially, religious verse. The reason these forms recur so frequently in Miller’s poetry is that they’re forms of language we think of as socially active; they do something. Whether it makes us dance or christens us, Miller sees language as having, at the very least, active ingredients. Language – as in Miller’s poems ‘The Book of Genesis’ or ‘An Allowance for Uma-May’ – can forbid, but it can also permit. It can make and unmake us.

The relationship between language and ways of being, then, is often at the centre of his writing. In ‘Tangent C’, from There Is an Anger… we read of hurricanes, how ‘in the wonderful / non-meter of its rhythm, the freeness of its verse, / houses could be picked up and turned / into nothing.’ Elsewhere we find ‘I gave up on god / the way I gave up on drums / which is the same thing’. I want to suggest that for Miller, rhythm – by marking time in space – has the power to bestow existence. Without meter, a house can disappear; the animating power of god is equivalent to the animating power of drums, of a beat. Poetry, then – in which listening for rhythm is essential to understanding – has a power far beyond its literal meaning. This faith in poetry is one thing which makes reading Miller such a powerful experience. His work adds up to a thoroughgoing examination of the power language has over us, and the power we have over language. But this question isn’t framed as an intellectual game either. This is no ludic, deconstructionist attempt to make language into a corpse upon which we can operate as we see fit. It’s a question about the ways in which language is essential to our ability to live humanly with other humans.

The finding of ways for language to bear human truth is taken up again in Miller’s next book, A Light Song of Light. The moment I started telling everyone I met to read Kei Miller was the moment I first read ‘This Zinc Roof’ from that book. It begins: ‘This rectangle of sea’. Immediately, we’re presented with a vivid image; the corrugations of the roof as the waves of a section of unsettled ocean. The prosaic roof is invested with movement, with force and with mystery. But the poem goes on to describe the zinc roof – ‘This that the poor of the world look up to’ – in an enormous variety of ways. The poem brings in folklore, anecdote, religion, history, art, memory – condensed into the service of describing a piece of cheap metal. Things, we infer, are more than simply themselves; language’s power lies in its ability to open things up to their histories, their implications. Elsewhere, Miller writes ‘Maybe broken is just the same as being’. There’s a sense that broken things are thereby broken open – broken into exchange with the world; made full by their communication with things outside of them.

This idea of brokenness and multiplicity paradoxically conferring solidity and realness is one which hangs on throughout Miller’s work. A Light Song of Light is a book which obsessively defines its own terms. It contains several poems entitled ‘Some Definitions for Light’ and a ‘Some Definitions for Song’. Again, it’s the variousness and multiplicity he gives to these terms – their scattered, unfixed nature – which makes them valuable. Again and again, though, such ideas are cashed out in compassionate, human ways. Miller finds beauty in flaws, humanity in brokenness. The devastating ‘A Smaller Song’ emphasises the human cost of song, the tragedy and horror we need to bear in mind when we sing together with or for one another.

Dealing with the conceptual value of Miller’s work, or the political and social anger which motivates portions of his poetry, though, it’s possible sometimes to forget the sheer musical pleasure that can be found in this language. (Kei Miller is one of those poets that, if you take only the last word of each line of his poems, you end up with whole new poems, jingling and taut; ‘Tangent C’ from There Is an Anger has line endings which, with only a little repunctuation, spell out: One wonderful verse turned mud-storm. House spared, faith sailed. Run, God thing.) The gritty water of Miller’s prosody can slip between drumbeat end-rhymes and wispish, lyrical streams of half-rhyme and assonance. There isn’t space to quote his entire oeuvre here, but read the books and you’ll see what I mean.

This is not to suggest, of course, that his music can be separated from the political and conceptual concerns of the work. Take, for example, the fifteenth poem in the title sequence from The Cartographer Tries to Map a Way to Zion (Miller’s most recent, Forward Prize–winning book). The short poem is built around three heavy end rhymes – ‘arc’, ‘dark’ and ‘mark’ – which set up a kind of formal container for the poem and make up its load-bearing columns. But the poem ends:

The poem continues for two lines after that rhyme ‘mark’, which might tie up the cadence so neatly. The poem exceeds the limits it’s set for itself, transgresses its own boundaries. And it’s this transgression into mystery which the poem is talking about, the way that breaking free from rules (in this case, cartographic rules) allows supposedly scientific discourse to capture stranger, more experiential or liminal truths.

This is a major theme of Cartographer. The book sets up a dialogue between what seem like two semi-mythical or emblematic characters, the ‘cartographer’ and the ‘rastaman’. The cartographer, it seems, has come to Jamaica to map the land, to reduce the country to lines on paper. The rastaman, conversely, appears at first to represent the spirit of the country itself, all its profuse life and history, everything which – in its horror and its beauty – refuses and exceeds any attempt to reduce it to a two-dimensional diagram.

If you’re anything like me, then, you’ll assume early on that the book will be a clever deconstruction of the colonial violence, intellectual or physical; the imperative to reduce the colonised countries and people to simple, measurable representations of themselves, to strip the life out of their victims in order to make the atrocities committed against them less atrocious. And the book does deconstruct that logic – but it does hugely more, as well. We read that ‘the rastaman – it is true – dismisses / too easily the cartographic view’. One interesting thing these lines do is call suddenly into question who exactly is narrating these poems; who reserves the authority in this dispute to tell us which stance is and which isn’t true. Does poetry working in a euro-centric intellectual tradition necessarily take the side of the brutal rationality of enlightenment thinking? Miller won’t tell us; we’re called on to decide for ourselves. Then again, perhaps my lack of access to the experience of people of colour, or people working from other traditions than my own, skews my response to this question. I can’t say.

Later, though, the cartographer points out to the rastaman that ‘every language, even yours, / is a partial map of this world’. This seems to me a crucial thought in reading this book: that all of the criticisms the book levels against mapmaking can also be levelled at language, at poetry; the reduction of the vivid world to a series of marks upon a page. Suddenly it seems clear that the cartographer represents the poet, returning to try and understand Jamaica through a formalised craft, just as much as the rastaman does. One way that Cartographer works, then, as a book, is as a hard-fought and ultimately unwinnable struggle between two sides of Miller.

If, as I said earlier, Miller’s poetry is a poetry of Jamaica and Britain, these places often in his work act as symbolic polarities, mapping onto various binaries: black/white, Zion/Babylon, art/science, qualitative/quantitative, ignorance/knowledge, free verse/formal poetry, signified/signifier, feeling/thinking, masculine/feminine, creole/Queen’s English, body/mind, knowledge/ignorance, the thing itself/ideas about the thing – the oppositions Miller plays with and against are bewilderingly numerous. Importantly, though, the poetry refuses to endorse binary distinctions. Often in Miller’s writing each pole infects and complicates the other. Ultimately, these oppositions collapse into a beautiful, jagged relation. We may want to ignore these difficult relationships, but it’s one of our obligations as humans, these poems suggest, to look harder, and to look further.

Kei Miller is a Jamaican poet and novelist. His first collection was There is an Anger that Moves and he is editor of New Caribbean Poetry (both Carcanet, 2007). Carcanet published the collection A Light Song of Light in July 2010, and his novel, The Last Warner Woman, is published by Weidenfeld and Nicolson. His collection The Cartographer Tries to Map a Way to Zion was published in 2014, and won the Forward Prize for Best Collection. He will read at Poetry And…Mapping at King’s on 18 November.

Joey Connolly lives in London, where he works at Faber & Faber. He edits Kaffeeklatsch, a journal of poetry and criticism, and is the manager of the Poetry Book Fair. His poetry has appeared in various places including The Best British Poetry 2014 (Salt), The Sunday Times, and on BBC Radio 4. He received an Eric Gregory award in 2012, and his first collection is forthcoming from Carcanet next year.

View all posts by Joey Connolly →