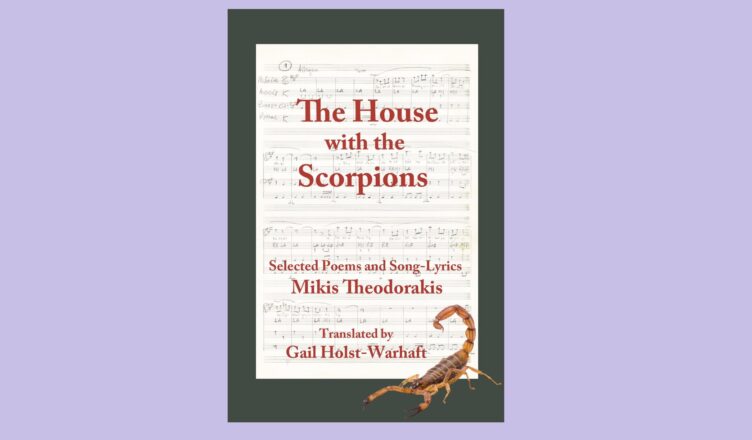 The below translations are taken from The House with the Scorpions: Selected Poems and Song-Lyrics of Mikis Theodorakis (Fomite, 2020), translated by Gail Holst-Warhaft. The book presents Theodorakis’s poems and lyrics in Greek and English.

In Greece Mikis Theodorakis is a national icon. He is the country’s most famous composer, and a figure who has spent his life struggling against injustice and oppression in his own country and elsewhere. He has been jailed and tortured for his beliefs, continuing to produce a stream of music and poetry despite his suffering. Gail Holst-Warhaft, who has spent many years working with the composer as a musician, biographer and translator, has translated all of the composer’s lyrics and combined them with Theodorakis’s virtually unknown poems.

Three sections from The Sun and Time

Note: This sequence of poems was written in prison during the military dictatorship of 1967-74. Theodorakis was arrested in August, 1967 and kept in solitary confinement, believing he would be tortured or executed. In exile, after his release, he set a number of the sections to music.

Note: Like The Sun and Time, these poems, that became song-texts, were written by Theodorakis about his imprisonment at the beginning of the 1967-74 dictatorship. The songs are dedicated to Andreas Lentakis, a fellow-member of the left wing organization Lambrakis Youth, who was severely tortured. The two prisoners communicated with each other in a code they tapped out on the walls of their adjoining cells.

Gail Holst-Warhaft was born in Australia. Besides being a poet she has been a journalist, broadcaster, prose writer, academic, musician, and translator. In the 1970s, while researching a book on Greek music, Holst-Warhaft performed as a keyboard-player with Greece’s leading composers, including Mikis Theodorakis. She has published translations of Aeschylus, and of a number of modern Greek poets and prose-writers. Her poems and translations of Greek poetry have appeared in journals in the US, the UK, Australia, and Greece. Her most recent book is Lucky Country (Fomite, 2018).

View all posts by Gail Holst-Warhaft →