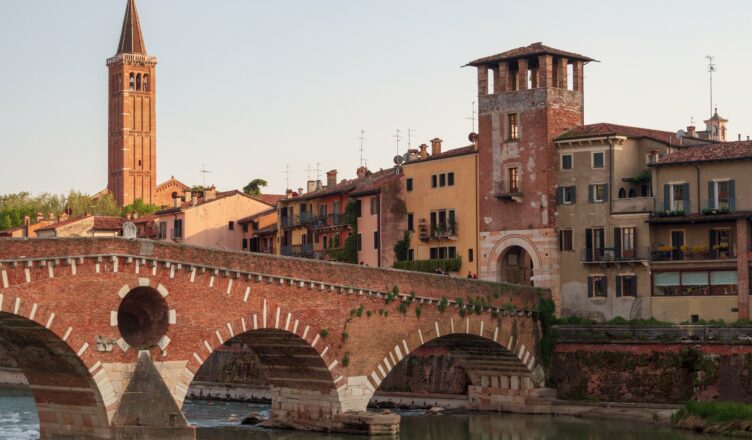 Situated halfway between Venice and Milan, recently the epicenter of the coronavirus pandemic, the city of Verona has had its fair share of detractors over the years, perhaps none quite as blighting as Byron, who spent some time within its walls shortly after quitting England for good. “I shall remain here a day or two to gape at the usual marvels,” Byron wrote to Thomas Moore in late 1816, “the amphitheater, paintings, and all that time-tax of travel – though Catullus, Claudian and Shakespeare have done more for Verona than it ever did for itself.” I admit I’ve never been fond of Verona, either. Unlike many, I never thought of it as the city of love; in fact, I have generally found it nothing short of punitively provincial and if only for its deep ties to far-right politics, whether of the separatist, fascist, or purely racist variety, I have never felt very comfortable there. It probably didn’t help that I never cared much for the literature that was set there, whether it was Romeo and Juliet or The Two Gentlemen of Verona – and as for Catullus, he left Verona when very young and moved to Rome, where he met Lesbia, the woman who inspired his poems. Rather, whenever I think of poetry and Verona in the same vein, however rarely that might be, I find myself turning to the least-known of the authors cited by Byron in his letter, namely Claudian and the poem for which he is now best remembered, ‘The Old Man of Verona’.

Born late in the fourth century ACE, Claudius Claudianus has long been considered the last of the classical Roman poets, a title he earned not only due to the era of rapid decay he witnessed, but for his poetry’s subject matter, some of which he devoted to the mixed-race general Stilicho, whom Gibbon called the last of the Romans. Despite being honored with a statue in the Forum prior to his death, few now recall Claudian or his long poems, for instance the riveting ‘Against Rufinus’, where the poet rails against the greed of the Eastern Emperor’s right hand, or ‘The Gothic War’, the only Latin poem to truly express the dread felt by Romans at the prospect of their empire’s inexorable downfall. Rather unfortunately, if Claudian is remembered at all, it is for an English translation of one of his shorter, untitled poems.

‘The Old Man of Verona’ is a third-person portrait of a simple farmer living in the rural outskirts of Verona. This man still walks the same fields he did as a boy and he has spent his entire life in the same house, never heeding the call of wanderlust, thus sparing himself a great deal of trouble and misery, including ‘drinking the waters of foreign rivers’. In fact, this old man is such a hodophobe that he’s never even been to Verona itself, although it’s just down the road. Verona, Claudian tells us, is more distant to him than India, and for this, the poet insists, the old man is not only lucky, but happy, for while his life may lack thrills, it is on the whole far better than if he’d ever set out to see the world. Let others go to Spain, Claudian concludes, staying home makes you happier.

Popular in medieval times in its original Latin and reaching a peak of translational popularity in England in the 17th and 18th centuries, when Claudian’s work was translated by scores of writers – Dryden, Jonson, and Pope were among his most prominent admirers – ‘The Old Man of Verona’ was perfectly suited to the limited certainties of the dark ages, when venturing out into the world was nothing short of suicidal, and the limitless uncertainties of the early modern period, when accelerated travel and rapid technological progress posed a serious threat to the pastoral life led by most people in Europe for the first time in nearly a millennium.

Despite stiff competition, the most famous translation of Claudian’s poem was penned by Abraham Cowley (1618–1667) and its opening lines have been quoted extensively ever since: “Happy the man who his whole time doth bound / Within the enclosure of his little ground.” Nevertheless, of all the available translations in the English language – there are over a dozen, and they vary greatly in quality and faithfulness to the original – it is Edwin Morgan’s Scots version that I think captures its spirit best:

During the years I spent assembling my anthology, The Heart of a Stranger (Pushkin Press), a history of civilization told through exilic literature, I often toyed with the idea of translating Claudian’s poem and including it in the book, where it might have served as a bizarre kind of ballast to many of the texts that instead reveled in rootlessness. In the end I decided against it, mostly because I found the poem’s message utterly depressing and spiritually hollow. Worse still, nothing about it rang true. Neither the original, nor its various translations ever came close to convincing me that a life spent in one’s own fields is preferable to a life on the road, or at least one not spent avoiding the reality that every individual is part of a wider whole, whether they think so or not.

Take Cowley’s case. The scion of a wealthy Royalist family, Cowley spent twelve of his forty-nine years exiled from England and only returned shortly prior to the Restoration. Having led the existence of a Civil War-era Candide, Cowley retreated to a garden and devoted his final days to botany and books. Indeed, his translation of Claudian’s poem, entitled ‘There Was An Old Man From Verona’, appears as a coda to one of his essays, ‘The Dangers of an Honest Man in Much Company’, a paean to the virtues of living a more morally balanced life removed from the world’s evils:

Do ye wonder that a virtuous man should love to be alone?… Man is to man all kind of beasts —a fawning dog, a roaring lion, a thieving fox, a robbing wolf, a dissembling crocodile, a treacherous decoy, and a rapacious vulture. The civilest, methinks, of all nations, are those whom we account the most barbarous; there is some moderation and good nature in the Tupinambáns[ii] who eat no men but their enemies, whilst we learned and polite and Christian Europeans, like so many pikes and sharks, prey upon everything that we can swallow.

Blending an early critique of imperialism with the then-bourgeoning myth of the noble savage – tales of the Tupinambá also inspired Michel de Montaigne’s essay ‘Of Cannibals’ – Cowley’s chief contention is that human beings are irremediably sinful, and that consequently one must not only limit one’s exposure to others, but that to stray beyond one’s birthplace meant only to “inflame the contagion” of wickedness in the world. However, given that Cowley spent a quarter of his life following the Stuarts around in their luxurious exile, what did he know of dwelling under the same roof surrounded by the same trees, or of its virtues?

Judging by what little biographical data is available, Claudian’s own purchase on rootedness wasn’t all that convincing, either. Born in Alexandria, he was educated in Rome, and spent much of his time in the Western court at Mediolanum (Milan) – and as fas as is known, he never returned to his country. It is also difficult to reconcile the Claudian of ‘The Old Man of Verona’ with the man who set many of his other poems in various locations throughout the Roman empire, one of which beautifully describes the stillness of Smyrna’s harbour, a city on the opposite side of the Mediterranean from his native Alexandria.

It is telling that Claudian’s Rome, besieged by ‘barbarians’ it did not wish to accommodate, had clearly become far less cosmopolitan than the old Republic. Nearly six hundred years earlier, the playwright Terence had written the line, “Homo sum, humani nihil a me alienum puto”, “I am a man, and nothing human is foreign to me”, a sentiment which in Claudian’s time, as in ours, had grown to be seen as little more than wishful thinking.

Given that no community can exist without first excluding certain groups or individuals from its ranks, the very idea of civilization begets exile – and since human beings appear entirely unable to truly spend their lives on their own – to exile oneself from humanity as the old man of Verona does, is, I believe, more than likely to lead to unhappiness, contrary to the belief espoused by Claudian’s poem. Furthermore, there is probably nothing more aggressively nationalistic than mindlessly singing the praises of one’s own homeland, judging it to be superior to others despite one never having examined the alternatives in person. In fact, to presume that happiness could possibly arise out of such close-mindedness is chilling. Thanks to the ‘Clash of Civilizations’ and the ‘Great Recession’, a wholesale assault has been launched on the concept of cosmopolitanism and global citizenship and while our collective history has proved that history’s arc does not bend inexorably one way or the other, we must learn to never listen to that old man from Verona, for there is nothing greedier than laying claim to so abstract a concept as a ‘country’, and as Claudian himself once said, “greedy men are always poor”.

[i]     English translation by Eric Thomson.

‘Like walking in the rain’: César Vallejo, Carolyn Forché, and the problem of witness

On ‘Heredity/ASTYNOME’ by Naush Sabah